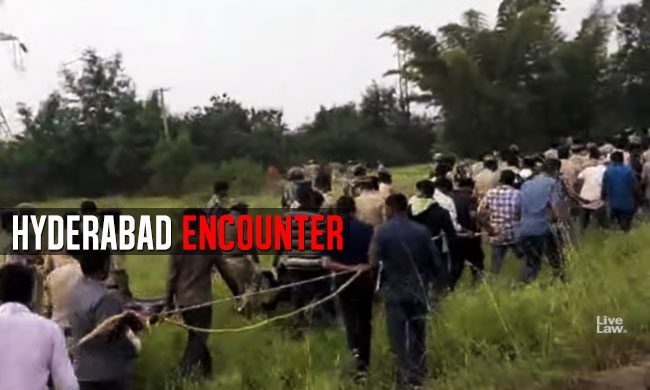 In relation to the alleged encounter killings of the accused in the gang rape and murder of a 26-year-old veterinary doctor(Disha case), the judicial enquiry commission appointed by the Supreme Court has found fault with the Telangana police for refusing to register the FIR, when the parents of the victim had complained about her missing.

The Commission noted that the police turned away the victim's parents citing lack of territorial jurisdiction. Around 10.30 PM on November 27, 2019, after the victim (given the name Disha) went missing, her sister and parents approached the RGIA Police Station. The police did not register the FIR claiming that they did not have jurisdiction and directed them to approach Shamshabad Rural Police Station. The relatives then searched the nearby areas and went to Shamshabad Rural Police Station where finally at 3 AM on November 28, 2019, the complaint was registered as a woman missing case.

The Commission has concluded that Order 409 (3) of the Andhra Pradesh Police Manual was not followed in Disha's case. The order 409(3) mandates:

It may be noted that, back in 2019 when the unfortunate incident had taken place, the kin of the victim had reportedly alleged that the police had wasted precious time which could have been used to save her.

"Order 409 (3) of the Andhra Pradesh Police Manual mandates that information relating to the cognizable offences should be registered even if they are presented in a police station not having jurisdiction and such registration should not be refused on the point of jurisdiction and after registration, the FIR should be transferred to the concerned police station. However this provision does not authorize such Police Station to start with the investigation into the information relating to the offence presented to it. It is seen that Order 409(3) was not followed in the case of Disha. The Commission is informed that the Government has since issued circular mandating strict compliance with order 409(3). In addition to strict compliance with the order, the Commission recommends that an exception be made in respect of the information received of offences against women or children. Whenever information relating to cognizable offences committed against women or children is received by any police station not having jurisdiction, it should not only register the complaint but also start the investigation immediately. It shall later handover the further investigation to the regular police station".

The Commission also found that the encounter killings were staged and that the police version that the 4 accused snatched away the pistols from officers and ran way was "concocted". The Commission has therefore recommended that 10 police officers should be tried for the murder of the 4 accused, 3 of them who were found to be minors.

The Hyderabad case was not the first case concerning inaction on part of police authorities for registration of complaints of offences against women.

After the 2012 gang rape and murder case, the Justice Verma Committee had recommended the provision of a Zero FIR, which is the FIR which is registered at the Police station where the information about a Cognizable Offence is received, irrespective of whether it has got territorial jurisdiction or not.

The Justice VS Sipurkar Commission constituted in the present case has recommended that whenever information relating to cognizable offences committed against women or children is received by any police station not having jurisdiction, it should not only register the complaint but also start the investigation immediately. It shall later handover the further investigation to the regular police station.

Other Recommendations by Commission: The commission has also made some other recommendations with regard to the criminal justice system and enforcement of legal provisions:

Separate wings of Police be maintained for investigation and for maintenance of Law and Order.

Mandatory Compliance of the Constitutional and statutory requirements during arrest

Body worn cameras and dash cameras - The Commission has recommended that the police should use body worn cameras which record in real time their actions as well as their surroundings and their interactions with the citizens and suspects. Similarly cameras should be installed on the dashboards of the police vehicles.

Forensics - The first responders to a crime scene should be trained and instructed in the preservation of the crime scene. The "Clues Team" or Forensic experts should be given complete charge of the Crime Scene preservation, observation, documentation, photography, videography and collection of forensic evidence.

Remand of accused by Executive magistrate - The Commission has recommended that Executive Magistrates being kept in charge of the Court of Judicial Magistrate for any purpose should be completely avoided. It is further recommended that in case of an extraordinary situation where the Executive Magistrates required to be called upon to exercise powers under Section 167(2-A) Cr.P.C, careful selection be made keeping in mind the knowledge of concerned law and procedure and experience of the person.

Production of accused while granting police custody - The Commission has recommended that it in view of the proviso (b) to Section 167(2) of Cr.P.C it should be made mandatory that every time an application for police custody is filed, the Magistrate should direct that the accused be produced before him at the time of hearing the said application.

Service of notice of applications filed by police on accused in prison - It has been recommended that serving of notice to the accused while they are in prison should not be considered as sufficient notice in any application if such notice is given prior to filing the application before the Court. Even if such notice is effected, the Court should order fresh notice specifying the date on which the application is listed for hearing and also specifying that the accused should be produced before the Court on that date.

On receiving such information the Judicial Magistrate shall immediately proceed to the scene of custodial death for inquiry after due intimation to the Principal District and Sessions Judge in charge of the district. Inquest and other proceedings should be done under the supervision of the Judicial Magistrate.

Further, the bodies and the scene of incident should not be disturbed until the Judicial Magistrate has inspected and documented that same. The State shall not appoint an Executive Magistrate to hold inquiries under Section 176(1-A) in cases of custodial deaths.

Perjury - The present procedure for prosecuting perjury is cumbersome and hence perjury proceedings are not as effective as desired. The procedure for action for perjury shall be simplified