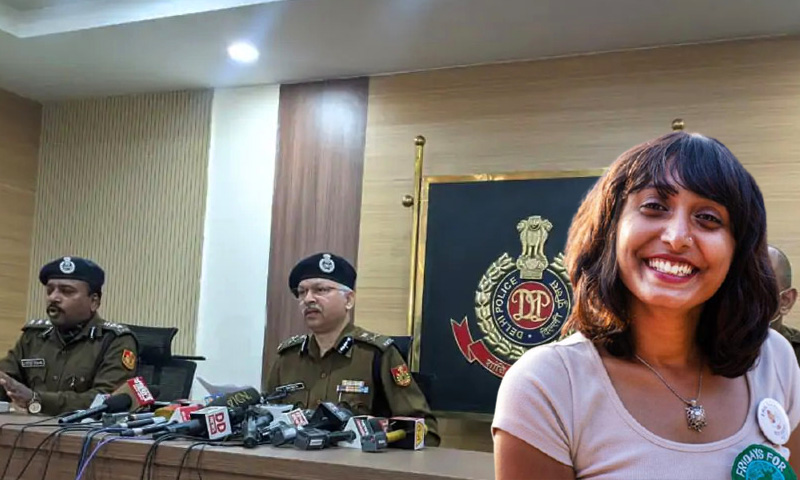 While hearing 21-year old climate activist Disha Ravi's writ petition, the Delhi High Court on Friday directed the Delhi Police to ensure that no leakage of information happens with regard to the investigation in the case registered in connection with the 'toolkit' over the farmers protests.A single bench of Justice Prathiba M Singh directed the Delhi Police to follow the Ministry of...

While hearing 21-year old climate activist Disha Ravi's writ petition, the Delhi High Court on Friday directed the Delhi Police to ensure that no leakage of information happens with regard to the investigation in the case registered in connection with the 'toolkit' over the farmers protests.
A single bench of Justice Prathiba M Singh directed the Delhi Police to follow the Ministry of Home Affairs' Office Memorandum dated Apr 1, 2010 titled "Advisory on Media Policy of Police", and to ensure compliance with their affidavit stating that there has not been and will not be any leakage from the Police's end to the media on vital details of the case.

The Delhi Police has also been directed to conduct press briefings in accordance with the law.

Aggrieved by the reportage in news channels Times Now, India Today and CNN News 18, Ravi had moved Court alleging the publication of "one-sided defamatory, suggestive innuendos, and half-truths" about her in the Toolkit case. The Court observed that the channel editors should ensure that that proper editorial control is exercised while disseminating information to ensure investigation is not hampered.
Senior Advocate Akhil Sibal appeared for Disha Ravi, whereas the Delhi Police was represented by ASG SV Raju and the Union was represented by ASG Chetan Sharma.
Sibal placed reliance on the MHA Memorandum and argued that the memorandum itself directed for the accused person's right to privacy to be respected. In response to which, ASG SV Raju appearing for Delhi Police, argued that the directions in the memorandum were not as much for the protection of the right to privacy as for ensuring that investigation in the case is not hampered.

At this, Sr. Adv. Sibal pointed out that he was fully in agreement with the ASG on the point that investigation was not to be hampered due to vilifying/sensationalized media reporting which was why Ravi had made prayers asking for restraint to be shown till the chargesheet is filed in the case.

Sibal also said that the said OM was also relied upon in various judgements, at which point, Justice Prathiba Singh enquired of ASG Raju if the OM was still operative. Raju then informed the court that it was.

The following are some of the guidelines laid down in the OM:

"I. Only designated officers should disseminate information to the media on major crime and law and order incidents, important detections, recoveries and other notable achievements of the police.

II. Police Officers should confine their briefings to the essential facts and not rush to the press with half-baked, speculative or unconfirmed information about ongoing investigations. The briefing should normally be done only at the following stages of a case:
a. Registration
b. Arrest of accused persons
c. Charge-sheeting of the case
d. Final outcome of case such as conviction/acquittal etc.

In a case that attracts the interest of the media, a specific time may be fixed everyday when the designated officer would make an appropriate statement on the investigation.

III. In the first 48 hours there should be no unnecessary release of information except about the facts of the incident and that the investigation has been taken up.

IV. The general tendency to give piecemeal information/clues, on a daily/regular basis, with regard to the progress/various lines of investigation, should be strongly discouraged so that the investigations are not compromised and the criminals/suspects do not take undue advantage of information shared by the Police authorities about the likely course of the investigation.

VI. Due care should be taken to ensure that there is no violation of the legal, privacy and human rights of the accused/victims.

VII. No opinionated and judgmental statements should be made by the police while briefing the media".

Last year, the Delhi High Court had referred to this Office Memorandum in the case Devangana Kalita v Union of India to observe that police cannot use media to influence public opinion against the accused.

"An expression of an opinion that an accused is not guilty does not destroy the presumption of innocence that must be maintained till an accused is tried and found guilty of an offence. A media campaign to pronounce a person guilty would certainly destroy the presumption of innocence", a single bench of Justice Vibhu Bakhru had observed in that case.

"It is also necessary to bear in mind that human dignity is recognized as a constitutional value and a right to maintain one's reputation is a facet of human dignity. A person cannot be denuded of his or her dignity merely because he/she is an accused or is under trial"