'Disturbing Scenario': Supreme Court On Param Bir Singh's Lack Of Trust In Mumbai Police Which He Once Headed 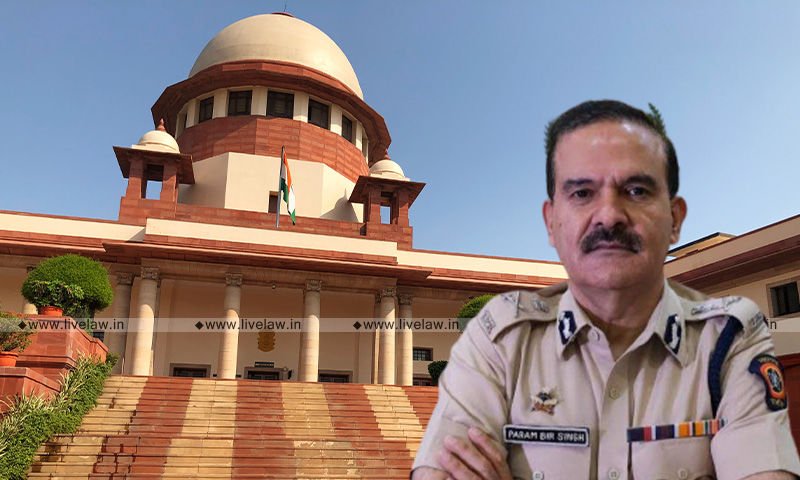 The Supreme Court on Tuesday orally remarked that it was a "disturbing scenario" that the former Mumbai Police Commissioner Param Bir Singh has no trust in the police force which he headed once.A bench comprising Justice Sanjay Kishan Kaul and MM Sundresh was hearing a petition filed by Param Bir Singh seeking protection from coercive steps by Mumbai police in the cases registered...

The Supreme Court on Tuesday orally remarked that it was a "disturbing scenario" that the former Mumbai Police Commissioner Param Bir Singh has no trust in the police force which he headed once.

A bench comprising Justice Sanjay Kishan Kaul and MM Sundresh was hearing a petition filed by Param Bir Singh seeking protection from coercive steps by Mumbai police in the cases registered against him.

The bench adjourned the hearing after being told that the State of Maharashtra has filed a Special Leave Petition challenging the order of the Bombay High Court which had refused its prayer to formulate an SIT to investigate the allegations levelled by Parambir Singh against former Home Minister Anil Deshmukh.

"Now, the State Government took a particular avenue by which they did not think it was appropriate for the CBI to look into it . We do not know which Bench of this Court will consider it and what view they will take. Let us see", the bench said.

In the meanwhile, in compliance with the order of the Supreme Court dated 06.12.2021 wherein the Apex Court sought the views of the Central Bureau of Investigation regarding taking up the investigation in the FIRs registered by Maharashtra Police against Param Bir Singh over allegations of misconduct and corruption, as they are interlinked with the matters already under the investigation of the central agency, CBI had filed a response. The Central Bureau of Investigation in an affidavit filed by it had submitted that the allegations against Param Bir Singh have an overlap with the investigation led by CBI in the allegations against the former Home Minister, Anil Deshmukh and therefore, the present matter ought to be investigated by the CBI to meet the ends of justice. It has been pointed out that the FIRs filed by the State Police with overlapping effects are intended to obfuscate the investigation already conducted by CBI. In view of the same, the CBI had requested the Court to reprimand such attempts to jeopardize the court mandated investigation conducted by the Central Agency.

At the outset, the Senior Advocate Mr. Puneet Bali appearing on behalf of Param Bir Singh referred to the averments of CBI in its affidavit, wherein it was categorically pointed out that the State Police was attempting to scuttle investigation conducted by CBI.

"We are ready to argue. CBI has filed their reply as desired by your lordships. The CBI has categorically said that these FIRs which have been registered against me from time to time and not only the FIR but also what they are trying to do in departmental proceedings. All of that. It is a whole chain of what started and transpired in Mumbai High Court on 5th April confirmed by your lordships. The matter which was handed over to CBI, the State of Maharashtra has tried its best to scuttle that investigation also. The Additional Chief Secretary and DGP refused to appear before CBI. The State of Maharashtra filed a WP before the Mumbai High Court, to scuttle the proceedings of the CBI and have an SIT formed by the High Court which has been rejected. The CBI categorically states that these are a chain of events which had started because of my letter of 19th March which culminated into an order passed by My lorships. This must be investigated by an independent agency."

Senior Advocate Mr. Darius Khambata appearing on behalf of the State of Maharashtra informed the Court that as per his affidavit there are ample reasons for which it would not be appropriate to handover the investigation to CBI, more so in view of the fact that the allegations against Param Bir are not related to the investigation being conducted by CBI.

"I appear for the State of Maharashtra. I have filed my affidavit on the 8th of Jan. According to me there are four distinct reasons why it would not be in the interest of justice to refer the FIR to CBI. I was never given the list; the nature of charges; the status of investigation and none of them have anything to do against the CBI investigation of the former Home Minister. The CBI affidavit only says that one of the FIRs may have an overlapping effect."

"What you are saying is that you are not able to work a way forward for investigating."

Responding in affirmative, Mr. Khambata apprised the Court that the State of Maharashtra had filed a Writ Petition before the Bombay High Court seeking directions to set up a SIT, which would investigate the allegations.

Solicitor General of India Mr. Tushar Mehta submitted that he apprehends a coverup by the State Police -

"The overlapping is so apparent, that my apprehension is that the State police might do something, making your task more difficult. A coverup or something. Kindly have an early date."

The Bench thought it would be appropriate to adjourn the matter till 22nd Feb.

As regards the character of Sachin Vaze, Mr. Bali submitted -

"The FIR that is registered against me. The person who has been suspended had filed a frivolous complaint against me, in Feb. He is reinstated 5 days before a preliminary enquiry has started as far as this allegation is concerned. A cop of dubious character against whom I took action."

" Nobody is holier than thou in this scenario."

Completing his submission Mr. Bali averred that the allegations that were made in the FIR are now being imposed upon Param Bir Singh in the departmental proceedings.

"One thing I wanted to say is that one is the aspect of what they have started now, FIRs registered against me, I have submitted before the investigation, My Lords have protected that challan should not be presented, that I should not be arrested. Now what is happening is My lords on the same allegation they registered against me…they have started departmental action against me on the same charges. If they are not trying to corner me in criminal cases they are doing so in departmental proceedings."

The Bench was perturbed by the allegation made against the State Police force by its former Chief. Upon hearing Mr. Bali's submission, the Bench refused to grant more relief to Param Bir Singh than what had already been granted.

Senior Advocate Mr. Siddhartha Dave appearing for the intervenor, sought the indulgence of the Court to allow his application and let him assist the Court in the matter -

"I am complainant who has lodged FIR against Mr. Bail's client along with other police officials for having invoked POCA against us on extortion. Please hear us also. Of our FIRs also your lordship wants to transfer to CBI."

"How are you concerned? Whether CBI will see to it or State police will see to it. I have great doubt if you can assist us in this matter in any manner but I am not disposing off your petition."

Mr. Mehta expressed his apprehension that the intervention of the State Police might dilute the investigation conducted by the Central Agency.

"I have been given a mandate by your lordship. If any steps are taken by the State which makes my task difficult would be an affront to your lordship's direction. Whatever the Government of Maharashtra does should be subject to what your lordship decides. They are filing chargesheets, they are recording statements. It should not dilute my investigation."

The Bench reckoned that the State has now taken a stand and is pursuing its remedy before the Apex Court and it should be considered if they are successful in taking their case forward. A decision can be taken after looking at the outcome of the same.

With respect to the case of Journalist Binu Ninan Varghese against whom the Mumbai police have registered a case of extortion along with Param Bir Singh, Senior Advocate, Mr. Siddharth Bhatnagar sought similar protection as granted to Param Bir.

"Please consider giving me the same protection from arrest."

While granting protection from arrest, the Bench asked Binu Varghsese to cooperate with the investigating agency.