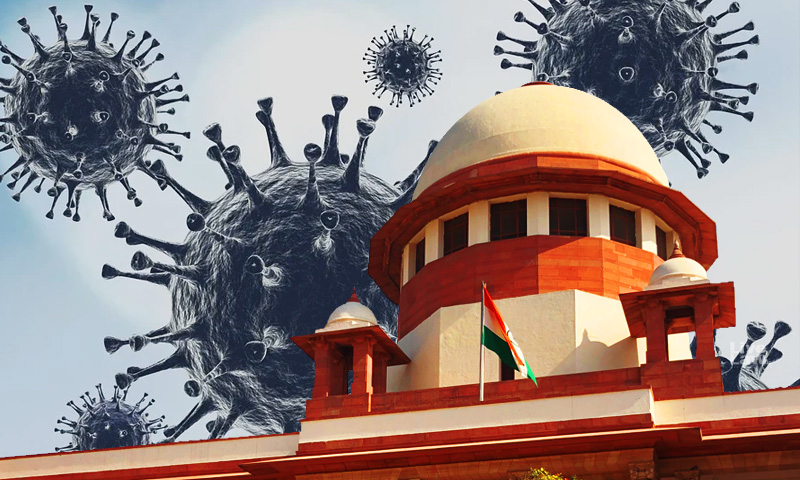 The Centre on Friday informed Supreme Court that Delhi, Punjab, Tripura, Karnataka & Maharashtra - have not made timely payment of salaries to healthcare workers despite the Centre' Notification under National Disaster Management Act which lays down strict penal action for non-payment.A bench of Justices Ashok Bhushan, MR Shah & R. Subhash Reddy told the Centre to do the...

The Centre on Friday informed Supreme Court that Delhi, Punjab, Tripura, Karnataka & Maharashtra - have not made timely payment of salaries to healthcare workers despite the Centre' Notification under National Disaster Management Act which lays down strict penal action for non-payment.

A bench of Justices Ashok Bhushan, MR Shah & R. Subhash Reddy told the Centre to do the needful so as to ensure that salaries to frontline healthcare workers battling Covid19 are effectuated timely. The bench was hearing an IA filed on behalf by United Residents and Doctors Association in a plea filed by Udaipur-based Doctor Arushi Jain seeking suitable accommodation and quarantine facilities for medical workers who are involved in treating of COVID-19 patients.

Senior Advocate KV Vishwanathan submitted before the Top Court today that the Doctors who were under mandatory quarantine were not being paid their dues by the Government.

The Solicitor General Tushar Mehta refuted this. "That Can't Be" he said.

The matter will be taken up for further consideration on August 10.

On June 17,  Supreme Court had directed the Centre to pass appropriate directions under the Disaster Management Act to the Chief Secretaries of all States/Union Territories to ensure that directions for payment of salaries to doctors and health workers are complied with. It was listed today to take stock of progress made by states in this regard.

On June 12, basis the submission of Senior Advocate KV Vishwanathan regarding acquisition of premises in terms of the Disaster Management Act, 2005, for the setting up of proper accommodation, the Bench directed the petitioners to hand over their suggestions/concerns to the Ministry of Health and Family Welfare.

Further to this, top Court had slammed the government for adopting a lackadaisical approach towards providing accommodation facilities to doctors and health workers at the frontline of Coronavirus crisis. The court also took note of the denial and withholding of their remuneration, directing the Petitioner to convey their suggestions/concerns to the Ministry of Health and Family Welfare.

The bench had stated orally,

"We cannot have dissatisfied soldiers in this COVID war. The doctors are not being paid, these things are coming to light, what is this?"

In response to the plea an Affidavit had been filed by the Ministry of Health and Family Welfare, wherein it was submitted that though adequate measures and substantive efforts (for instance, 5-star hotels being used for accommodations for doctors) had been taken by the Government, the final responsibility to protect oneself lay with the doctors themselves.

The Bench, while responding that they had just received the Affidavit, stated that two aspects had to be considered:

"1. How to solve this problem of high risk exposure (for doctors handling COVID patients).

2. Accommodations for doctors with requisite parameters to curb the issues."