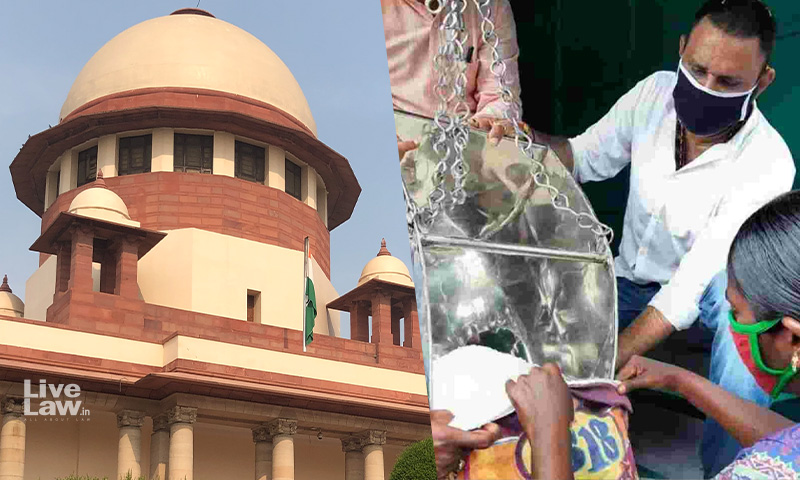 x
The Supreme Court requested the High Court to decide the matter on November 22 itself.

The Supreme Court on Monday refused to entertain the special leave petition filed by the Central Government against the September 27 order of the Delhi High Court which paved the way for the implementation of the Delhi Government's doorstep delivery of ration scheme.A bench comprising Justice L Nageswara Rao and Justice BR Gavai declined to entertain the petition having regard to the fact...

The Supreme Court on Monday refused to entertain the special leave petition filed by the Central Government against the September 27 order of the Delhi High Court which paved the way for the implementation of the Delhi Government's doorstep delivery of ration scheme.

A bench comprising Justice L Nageswara Rao and Justice BR Gavai declined to entertain the petition having regard to the fact that the impugned order is an interim order and that the matter is posted before the Delhi High Court on November 22.

"...we're not inclined to entertain the SLPs since the matter is pending before the High Court", the bench stated in the order.

The bench disposed of the matter requesting the High Court to decide the matter on November 22 itself. The bench also recorded in the order that no parties will seek adjournment.

Senior Advocate Dr Abhishek Manu Singhvi, appearing for the Government of National Capital Territory of Delhi, submitted that the preparation for the scheme is under progress and it cannot be implemented within a week. The bench recorded this submission in the order.

"We are informed by Dr. Singhvi that the preparation for implementation of the scheme of GNCTD is in progress and the actual implementation will take some time", the bench recorded.

The Court also disposed of a petition filed by an organization of fair price shop dealers against the HC order in the same terms.

Solicitor General of India Tushar Mehta, appearing for the Union Government, submitted that the Delhi Government's doorstep delivery scheme was against the provisions of the National Food Security Act (NFSA).

"This matter has widespread ramifications. We have the National Food Security Act which provides for the distribution of food grains. The broad questions is whether a State Government can deviate from the mode of distribution prescribed by the Act", the SG stated at the outset.

"The GNCTD says that the grains would be supplied to private agents. They would convert grains into atta & supply the same to people. Now we don't know how much they'll supply", the SG said.

At this point, the bench asked why can't these arguments be raised before the Delhi High Court, before which the case is listed on November 22.

The SG replied that the order has a "devastating effect" and said that there was a pressing need to stay its operation. He emphasized that the Delhi Government scheme can disrupt the "One Nation One Ration Card Scheme", as there are no means to verify how much quantity a migrant person in Delhi has availed through doorstep delivery.

The top law officer of the Union pointed out that the doorstep delivery is not permitted by the NFSA. It can be allowed only through an amendment to the Act, and the same is not possible through an executive order issued by the Delhi Government. The FPS are registered under the electronic network and they are under the monitoring of the statutory authorities. The Delhi Government scheme will disrupt this mechanism.

"Private agencies distributing door to door, what quantity, which quality..no body knows..there is no accountability", the SG said.

At this point, Justice Nageswara Rao intervened, "Who is affected by this interim order? The fair price shop dealers. What is going to happen within a week? Why can't you argue before the High Court?Why should we hear you against the interim order?".

The SG said "Please don't take that we are for the fair price shop dealers. We are defending the Act. The High Court permits something which the Act prohibits. The Act permits doorstep delivery only to disabled people. I am not concerned with the fair shop dealers but with the Act. What about lakhs of rag pickers, rickshaw drivers, migrant workers, slum dwellers who do not have any permanent address? I represent them".

"This is going to be an all India issue which needs to be answered by this Court.  Let this not be trivialized by saying it is against an interim order", the SG urged.

The bench then asked Senior Advocate Dr Abhishek Manu Singhvi, appearing for the Government of the National Capital Territory, about the status of implementation of the order.

Singhvi at the outset submitted that the writ before the High Court was submitted by an organization of fair shop dealers and not by the Government of India. Even on the date of the interim order, two Additional Solicitor Generals of the Centre were present, and they did not object to the direction.

"What is so special that this matter cannot be considered by the Division Bench(of HC)?", Singhvi asked. He pointed out that a similar scheme was approved by the Calcutta High Court.

Dr.Singhvi further highlighted that the scheme is "optional", which was not mentioned by the Central Government. He added that 90% of the beneficiaries have opted for doorstep delivery.

He referred to Section 24 of the NFSA to argue that the intra-state distrubtion of food grains is a matter for the state to decide. At this point, Justice Gavai pointed out that Dr.Singhvi has not answered the first question regarding the implementation of the scheme.

Singhvi replied "It has not started in the full swing. Preparations are on going. There is no possibility of the scheme being implemented in a week".

Justice Gavai then asked if the scheme takes care of the concerns of the Centre about "One Nation One Ration Card Scheme".

Singhvi assured that the scheme is completely compatible with the ONORC as the delivery is through the E-POS and using the same biometric system.

At this point, the bench said that it will ask the Centre to argue the matter before the High Court only. The bench also asked Dr.Singhvi that the scheme should not be implemented till next Monday.

Dr.Singhvi submitted that the scheme cannot be implemented within a week and will not implemented as well, but urged the bench to not record the same in the order saying it will create a "different impression to score political brownie points".

Solicitor General requested the bench to record the statement in some form in the order.

A bench comprising Justice(s) Vipin Sanghi and Jasmeet Singh clarified that it was only after this exercise that such fair price shop holders need not be supplied the rations.

"The GNCTD shall first issue communications to each of the fair price shop holders, informing them of the particulars of the ration card holders, who have opted to receive their rations at their door steps and, only thereafter, the rations, to the extent that they are being supplied to such optees, need not be supplied to the fair price shop holders," the Court said.

The development had come after the Bench modified its earlier order dated March 22, 2021 wherein it had directed the Delhi Government not to stop or curtail the supply of food grains or flour to the members of the Delhi Sarkari Ration Dealers Sangh, Delhi.

The Court had also taken on record the statement made by Delhi Government that the beneficiaries under the PDS scheme, opting for delivery of rations at their door steps, would have the option to once again opt out and go back to the fair price shops for collection of their rations at any time.

"The GNCTD should publicize, for the benefit of the beneficiaries under the PDS scheme, the essential terms and conditions of this order," the Court added.

The Central Government is objecting to the Delhi Government's scheme saying that it cannot be implemented without amending the National Food Security Act.