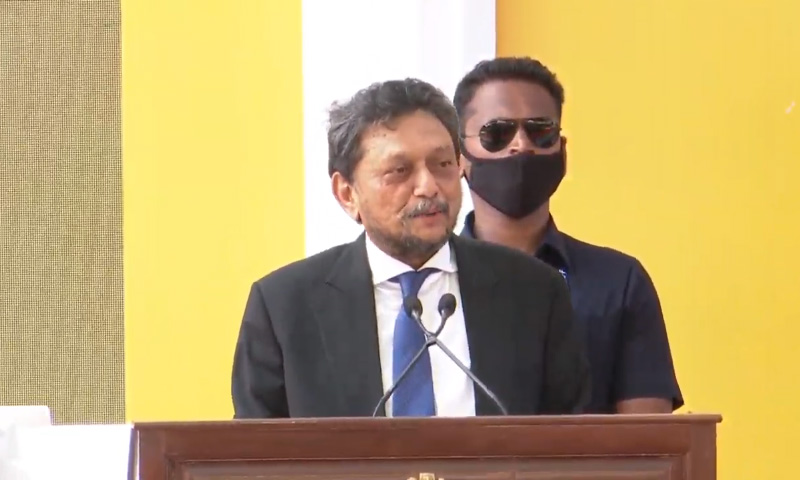 The Chief Justice of India Sharad Arvind Bobde on Wednesday said Dr Babasaheb Ambedkar had proposed for Sanskrit to be the official language of the Union of India as he anticipated the issue of languages. Speaking at the inaugural ceremony of the academic building of the Maharashtra National Law University (MNLU), in Maharashtra, the CJI said that Dr Ambedkar understood the social...

The Chief Justice of India Sharad Arvind Bobde on Wednesday said Dr Babasaheb Ambedkar had proposed for Sanskrit to be the official language of the Union of India as he anticipated the issue of languages.

Speaking at the inaugural ceremony of the academic building of the Maharashtra National Law University (MNLU), in Maharashtra, the CJI said that Dr Ambedkar understood the social and political needs of people.

"Dr Ambedkar had anticipated the issue of language. He had tabled a proposal, which was signed by certain Mullas, Priests & Dr Ambedkar himself. I am not sure if the proposal was tabled, but it was to make Sanskrit the official language of the Union of India. The proposal eventually didn't go through."

On the occasion of the 130th birth anniversary of Dr Ambedkar, the CJI said, the jurist knew exactly what the poor wanted. The north Indians would be opposed to Tamil, the way South Indians are to Hindi. However, Dr Ambedkar understood that both regions would be at peace with Sanskrit, he said.

The CJI then completed his address in English, noting that it was accepted throughout the country.

Apart from the physical presence of the CJI and Justice BR Gavai, who has been appointed as the Chancellor of the University, Maharashtra Chief Minister Uddhav Thackeray, Union minister and Nagpur MP Nitin Gadkari and opposition leader Devendra Fadnavis and others participated in the event virtually.

Chief Justice of the Bombay High Court, Dipankar Datta, was also present at the event.

Don't Use Your Education for The Corporates, Use It for The Poor. – CM

In his address, CM Thackeray urged future graduates from the university to fight for the rights of the downtrodden instead of joining corporate giants.

"I will also request the students who may succeed after they graduate from this university, that they may become as big as they want to, but they should remember the needs of those who are not as privileged as them."

He compared teachers at the university to the sculptor of a deity. "A sculptor puts in efforts keeping in mind that his creation is going to be revered by the followers of that deity. The teachers will have to keep that in mind while teaching," he said.

The CM further said that irrespective of the government in power, or CM of the State, as far as the courts or its institutions are concerned, the State Government has in the past and will in the future always respect it. That is because we are people who respect the rule of law, and believe in Justice for the poor.

Sixty – acres of land were earmarked for The Maharashtra National Law University, in Nagpur, in 2016. It is the Nineteenth National Law University in the country. The construction of the university is in three phases. The first phase involving a hostel, the administrative wing, mess, staff quarters and the main gate is likely to be completed soon.

Speaking about the courses that will be offered at the university, the CJI said it will be a first of its kind university specifically aimed at producing judges, "I must mention 2 unique things about this University. Much on the lines of the National Defence Academy, which produces not just soldiers but also officers, the University has initiated a course that will not produce advocates but judges."

The second, he said, is about a course on ancient Indian text "Nyay Shastra." It was difficult to put this course together as the entire material was in Sanskrit. When I saw the textbooks on Nyay Shastra, I found that the system in India was in no way inferior to the Aristotelian system, the CJI said.

"I see no reason why we should forsake, overlook and not benefit from the geniuses of our ancestors and that is how this course began which is unique," CJI Bobde said.

The CJI, set to retire on April 23, said, the Law school is the nursery from which springs forth the harvest of our legal profession as well as judges. The Dreams of many people have come true with the Maharashtra National Law University (MNLU).