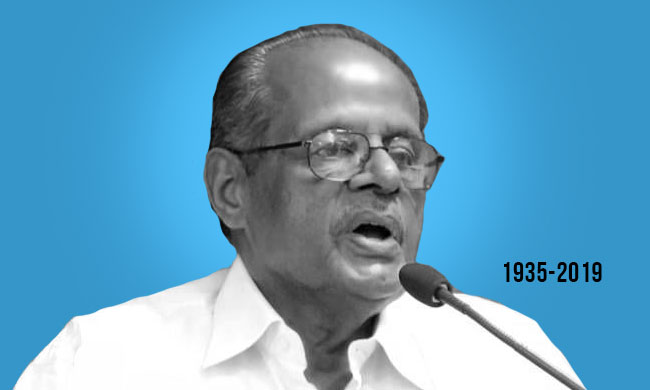 This was announced by the Ministry of Home Affairs on Saturday evening.

Dr Menon is known for changing the face of Indian legal education by pioneering the establishment of National Law Schools. He is credited with the conceptualization of five year integrated LLB course, in place of the earlier 3-year course

Born in 1935, Dr. N.R. Madhava Menon had his B.Sc. and B.L. degrees from Kerala University, LL.M. and Ph.D. from Aligarh Muslim University and M.A. Degree from Punjab University. He got enrolled as an Advocate in Kerala High Court in 1956.

Dr. Menon joined the faculty of Aligarh Muslim University in 1960; moved to Delhi University in 1965, became Professor and Head of the Campus Law Centre. During this period he served on deputation as Principal of Government Law College, Pondicherry and Secretary of the Bar Council of India Trust.

In 1986, Dr. Menon moved to Bangalore at the invitation of Bar Council of India to set up the National Law School of India University and to initiate a new model of legal education, the Five Year Integrated LL.B. programme. He served NLSIU as its Founding Vice-Chancellor for 12 years. He was invited by the West Bengal Government to establish a similar law school in Kolkata. From 1998 to 2003, he served as the Founder Vice-Chancellor of the National University of Juridical Sciences. The Supreme Court sought his services to set up the National Judicial Academy at Bhopal, and was the Founder Director of NJA till 2006.

Dr Menon is the author of over a dozen books on legal education, legal profession, legal aid, judicial training and administration of justice. A book "Turning Point" published by Universal Law Publishers, Delhi (2010) is on the life and works of Prof. Menon. There is an annual Best Law Teacher Award of a lakh of rupees and a plaque instituted in Prof. Menon's name by the Society of Indian Law Firms to commemorate his services to the legal profession and legal education for more than half a century.