'Litigants In Distress' : Supreme Court Deprecates Centre's Practice Of Giving Additional Charge To DRT Of One State Over Another State Due To Unfilled Vacancies 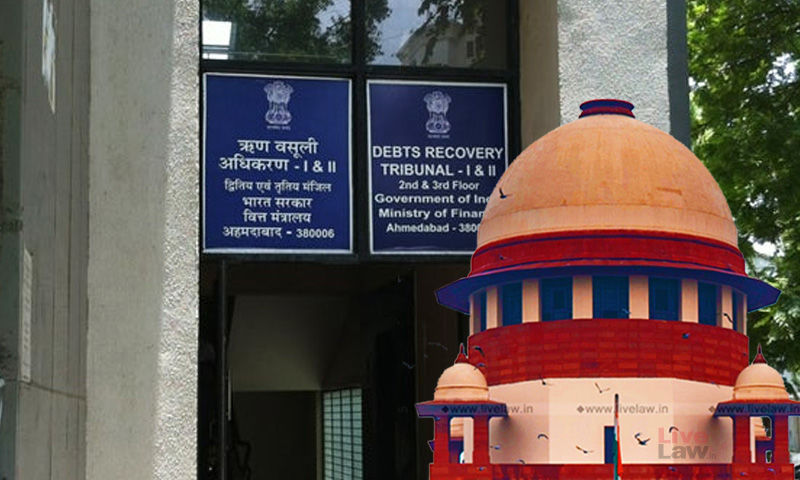 The Supreme Court on Wednesday expressed disapproval of the Centre's practice of extending jurisdiction of Debts Recovery Tribunal of one state to another state due to unfilled vacancy of Presiding Officer.

A special bench comprising the Chief Justice of India NV Ramana, Justice DY Chandhrachud and Justice L Nageswara Rao was hearing a petition filed by the State Bar Council of MP challenging a notification issued by the Central Government attaching the jurisdiction of DRT Jabalpur (Madhya Pradesh) to DRT Lucknow(Uttar Pradesh) instead of filling the vacancy of Presiding Officer at DRT Jabalpur.

The bench observed that this problem persists in other states as well. It adjourned the matter for two weeks after Attorney General for India KK Venugopal assured that the Union will make appointments soon.

During the hearing, the Bench also observed that the recent judgement by Kerala High Court which held that the Centre cannot give the charge of a Debt Recovery Tribunal of one state to the Presiding Officer of another State has country-wide application.

"Imagine a litigant coming from Jabalpur to Lucknow! Is he supposed to get a new lawyer or take his own lawyer from Jabalpur to Lucknow? Likewise Chhattisgarh! And the Kerala High Court has quashed a similar notification transferring jurisdiction from Kerala to Bangalore! That has now countrywide application. It is not just confined to Kerala. Of 23rd March 2021, the Kerala High Court judgement laid down the law! There is no challenge to it. Six months have gone by. So how can people be left in the lurch? When you go to the High Court, no court interferes under 226! They ask the person to follow their remedy under SARFAESI", Justice Chandrachud said.

"Last time, the Solicitor General said appointments will be made in Jabalpur. Something has to be done. You can't deny access to justice", Justice Nageswara Rao said.
"Not just Jabalpur this is a problem everywhere", the CJI added.
The CJI pointed out that similar situations were prevailing in the states of Telangana and Andhra Pradesh, as there is no DRT Benches in Hyderabad or Vishakhapattanam. So people had to go to Calcutta. But now there is no officer in Calcutta too, so the Lucknow officer is put in charge.

"There is no officer in Visakhapatnam or Hyderabad. For both states of Telangana and Andhra, you have to go to Calcutta. Calcutta was put in charge. In Calcutta also, now there is nobody. So you have been put in charge in Lucknow. It is a pitiable condition", the CJI said.

"At least give a judicial officer jurisdiction over the DRT cases in Jabalpur. The litigants are in distress. I will tell you the practical difficulty. If the bank issues notice under 132) of the SARFAESI, the litigant has no remedy. This is followed by taking of possession under 13(4). The High Court says it will keep its hands-off. The bank will take possession of the factory, the house, or some other asset of the debtor. There is absolutely no recourse to the debtor", said Justice Chandrachud.

The Attorney General agreed that making appointments was the only solution.

"We have expressed earlier what order we intend to pass. If without inviting any order from the court, you can do it, you are welcome to", said the CJ to the AG. "Certainly", replied the AG.

Along with this petition, the bench considered other petitions relating to the issue of unfilled vacancies in other Tribunals.

Details Of The Petition:

The Petition has been filed by M.P State Bar Council through AOR Mrigank Prabhakar against the Delhi High Court's 9th July order which refused to stay the notification which attached the DRT Jabalpur's jurisdiction to DRT Lucknow.

The plea challenges the notification being ultra vires and contrary to Section 4 of Recovery of Debts Due to Banks (RDDB Act, 1993) on the ground that the Act prohibits the Centre from vesting the powers of DRT of any state to a DRT situated in another state, but rather obliges the Centre to vest it on any tribunal established by its situated within the boundaries of the same state.

The SLP of the Bar Council has also claimed that for more than one year, DRT, Jabalpur had been lying vacant.

The plea argues that the Delhi High Court should have decided the issue urgently, at least on the question of stay of the operation of impugned notification issued by the Ministry of Finance, GOI.

The plea submits that instead of deciding the Stay Application expeditiously, the High Court posted it after six weeks awaiting the reply from the Central Government.

Also from the hearing : 'We Are Very Unhappy': Supreme Court Says Centre Made NCLT/ITAT Appointments From Wait-List Ignoring Select-List