Health Of Environment Is The Key To Preserve The Right To Life Under Article 21: SC [Read Judgment] 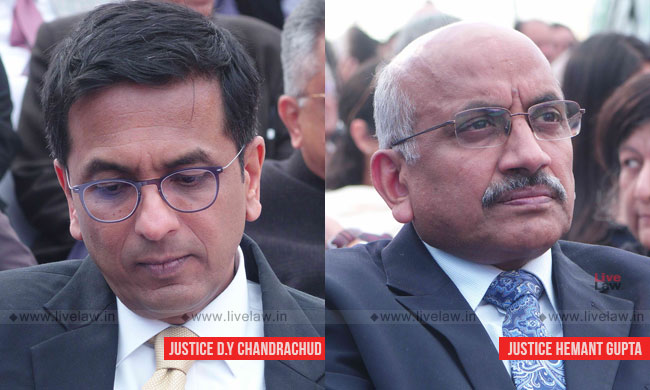 x
The health of the environment is key to preserving the right to life as a constitutionally recognized value under Article 21 of the Constitution.

The Supreme Court has suspended the Environmental Clearance granted for the development of Greenfield international airport at Mopa in Goa. The bench comprising Justice DY Chandrachud and Justice Hemant Gupta directed Expert Appraisal Committee to revisit the recommendations made by it for the grant of clearance. In the area of environmental governance, the means are as significant...

The Supreme Court has suspended the Environmental Clearance granted for the development of Greenfield international airport at Mopa in Goa.

The bench comprising Justice DY Chandrachud and Justice Hemant Gupta directed Expert Appraisal Committee to revisit the recommendations made by it for the grant of clearance.

In the area of environmental governance, the means are as significant as the ends. The processes of decision are as crucial as the ultimate decision, said the bench while holding that there were many procedural flaws in the grant of EC. While the need for a public project as significant as an international airport is duly factored into the decision making calculus, it should be ensured that such development proceeds on a considered view of the importance of the prevailing state of the environment, the court added.

The court said that the EAC, after reconsidering the matter, if it allows the construction to proceed, it shall impose such additional conditions which in its expert view will adequately protect the concerns about the terrestrial eco systems.

The National Green Tribunal had earlier upheld the EC by imposing additional conditions to safeguard the environment. The NGT order was assailed in appeal before the Apex court by Hanuman Laxman Aroskar and Federation of Rainbow Warriors. Advocate Anitha Shenoy, appearing for the appellants, pointed out many shortcomings and lack of procedural compliance in issuing the EC. Attorney General of India KK Venugopal, on the other hand, submitted that the proposed project for setting up an international airport at Mopa has been on the drawing board for nearly two decades. The setting up of an airport is an imminent need, since the existing airport at Dabolim has reached a saturation point and is unable to cater to the growing volume of passenger traffic into Goa, he told the court.

Neither the process of decision making nor the decision itself can pass legal muster.

In a detailed judgment, the Apex Court bench observed there are many procedural flaws in the grant of EC. The court added that the NGT has not discharged an adjudicatory function which properly belongs to it by not carrying out a merit review. It said:

"There has been a failure of due process commencing from the non-disclosure of vital information by the project proponent in Form 1. Disclosures in Form 1 are the underpinning for the preparation of the ToR. The EIA report, based on incomplete information has suffered from deficiencies which have been noticed in the earlier part of this judgment including the failure to acknowledge that within the study area contemplated by the Guidance manual, there is a presence of ESZs."

Public Consultation Not Just A Formality

Emphasizing the importance of public consultation, the bench said that it cannot be reduced to a mere incantation or a procedural formality which has to be completed to move on to the next stage. The court said:

"They have both, an intrinsic and an instrumental character. The intrinsic character of public consultation is that there is a value in seeking the views of those in the local area as well as beyond, who have a plausible stake in the project or activity. Public consultation is a process which is designed to hear the voices of those communities which would be affected by the activity. They may be affected in terms of the air which they breathe, the water which they drink or use to irrigate their lands, the disruption of local habitats, and the denudation of environmental ecosystems which define their existence and sustain their livelihoods."

"Public consultation involves a process of confidence building by giving an important role to those who have a plausible stake. It also recognizes that apart from the knowledge which is provided by science and technology, local communities have an innate knowledge of the environment. The knowledge of local communities is transmitted by aural and visual traditions through generations. By recognizing that they are significant stakeholders, the consultation process seeks to preserve participation as an important facet of governance based on the rule of law. Participation protects the intrinsic value of inclusion."

Justice Chandrachud in the judgment also coined a phrase: Environmental Rule of Law. The judge said that Environmental governance is founded on the need to promote environmental sustainability as a crucial enabling factor which ensures the health of our ecosystem. The court said:

"The rule of law requires a regime which has effective, accountable and transparent institutions. Responsive, inclusive, participatory and representative decision making are key ingredients to the rule of law. Public access to information is, in similar terms, fundamental to the preservation of the rule of law. In a domestic context, environmental governance that is founded on the rule of law emerges from the values of our Constitution. The health of the environment is key to preserving the right to life as a constitutionally recognized value under Article 21 of the Constitution. Proper structures for environmental decision making find expression in the guarantee against arbitrary action and the affirmative duty of fair treatment under Article 14 of the Constitution."

The bench also rejected the argument questioning bonafides of the appellants. It said:

"Vague aspersions on the intention of public-spirited individuals does not constitute an adequate response to those interested in the protection of the environment. If a court comes to the finding that the appeal before it was lacking bona fides, it may issue directions which it thinks appropriate in that case. In cases concerning environmental governance, it is a duty of courts to assess the case on its merits based on the materials present before it. Matters concerning environmental governance concern not just the living, but generations to come. The protection of the environment, as an essential facet of human development, ensures sustainable development for today and tomorrow."