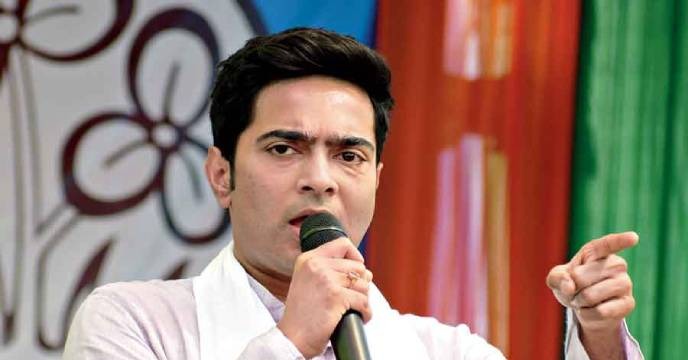 The Enforcement Directorate on Thursday voiced an apprehension before the Supreme Court about interrogating Trinamool Congress MP Abhishek Banerjee, the nephew of West Bengal Chief Minister Mamata Banerjee and his wife Rujira Banerjee at Kolkata.

Additional Solicitor General SV Raju, appearing for the ED, submitted that there are past instances of CBI officers being gheraoed in Kolkata and that Banerjee is an influential politician.

"My lords know how central agencies were treated in Kolkata...CBI officers were gheraoed....the first petitioner(Banerjee) is an influential politician..I should not be saying this..", the ASG submitted. The ASG's submission came in response to the Court's query why the agency cannot question Banerjees at Kolkata instead of Delhi as sought by them.

Addressing the agency's concern, the Court said that it can pass an order to the Kolkata Police to provide all assistance and will hold the State of West Bengal accountable.

"For a smooth passage, we will say the moment you make a requisition 72 hours in advance, the Kolkata Police will co-operate and we'll hold the State of West Bengal accountable", the Court orally said.

The Court also pointed out that the ED is not saying if the summons has been issued to them as an accused. The ASG said that he will clarify on this aspect and sought adjournment till tomorrow.

The Court adjourned the matter to next Tuesday and orally said that no coercive action be taken against the petitioners in the meantime.

"We are not passing any order. Things may continue as they are", the Court orally said.

"There won't be any precipitative action", the ASG said.

A bench comprising Justice UU Lalit, Justice Ravindra Bhat and Justice Sudhanshu Dhulia was hearing the special leave petition filed by Banerjees against the Delhi High Court's judgment which dismissed their challenge to the ED's summons issued in connection with a money laundering case registered over the West Bengal coal scam.

Senior Advocate Kapil Sibal, appearing for the petitioners, submitted that as per Section 160 of the Code of Criminal Procedure, the police should question witnesses at their place of residence.

"I am not saying no to investigation. I am saying come to Kolkata and interrogate..they want me to come to Delhi", Sibal submitted.

The ASG submitted that Section 160 CrPC was only applicable to police investigation and not to ED investigation, which is governed by Section 50 of the Prevention of Money Laundering Act (PMLA). He added that the issue relating to applicability of CrPC to PMLA investigation was heard in a batch of petitions before a bench led by Justice AM Khanwilkar, on which judgment is reserved. The ASG further submitted that the requirement of attendance at the place of residence as per the proviso to Section 160 CrPC is only applicable to women and males below the age of 15 years. In any case, Abhishek Banerjee cannot seek the benefit of this provision, he argued.

The ASG also pointed out that Abhishek Banerjee, being an MP, has a local residence at Delhi as well.

Senior Advocate Dr Abhishek Manu Singhvi, appearing in a connected petition, submitted that the predicate offence with respect to the ED case was registered by the CBI office at Kolkata. He pointed out that the ED has an office in Kolkata as well.

The bench asked the ASG about the tentative time period they might require for questioning, considering the fact that the complaint is of 2020. The ASG said that he cannot give a definite answer and added that the investigation is being delayed due to the non-cooperation of the petitioners.

The ASG also said that Section 160 does not apply to accused persons and applies only to witnesses.

"But you are not saying if they are accused", the bench observed.

The petitioners are challenging Delhi High Court's order refusing to quash summons issued to them by Enforcement Directorate in connection with West Bengal coal scam case.

The impugned order also dismissed the plea by Banerjee's wife Rujira Banerjee assailing the complaint filed by Enforcement Directorate against her in the money laundering case and the Trial Court order taking cognizance of the said complaint.

As an interim relief, the petitioners have sought an ad-interim ex-parte stay of operation of the impugned order dated 11.03.2022 passed by the Single Judge of the High Court of Delhi.

Further, directions have been sought to the ED to summon the Petitioners under Section 50 PMLA only at Kolkata (for Abhishek Banerjee) or only at their residence (for Rujira Banerjee), exempt Rujira Banerjee's personal appearance and allow her to appear through counsel before the Trial Court.

The CBI had registered an FIR in respect to alleged offences of illegal mining and theft of coal from the leasehold areas of Eastern Coalfields Ltd committed in the state of West Bengal by certain individuals. Pursuant to this, ED has registered an ECIR in the Head Investigative Unit located in New Delhi.

"Thus the substantial question of law, having great public importance that arises for the kind consideration of this Hon'ble Court in the instant petition is whether the Respondent-ED can assume a pan-India jurisdiction, to summon any person, without indicating to such person as to whether they are being summoned as an accused/ suspect or as a witness, at any place of their choice, under the purported garb of Section 50 of the PMLA, in utter derogation of the Fundamental Rights of the witness/accused persons, salutary principles of fairplay and expeditious investigation, and the extant provisions of the CrPC and the PMLA." the petition states.

The petitioners have argued that the impugned order virtually vests unfettered pan-India mandate on the ED and gives it uncanalised power to operate de hors the well-established and long- standing principles of criminal jurisprudence pertaining to territorial jurisdiction vis-a-vis place of occurrence of offence, cause of action, and residence of accused persons and summoned persons etc.

According to the petitioners the impugned order fails to appreciate that the Petitioners are permanent residents of Kolkata and that the entire alleged cause of action and the place of alleged offence, is in the State of West Bengal.

The petitioners have argued that it is inconceivable as to how the Impugned Order could permit investigation of the present case at New Delhi, under the 'superfluous ground' that the Headquarters of the ED is located in New Delhi.

According to petitioners, the provisions of PMLA or even CrPC does not contain any enabling provision for the investigation to be conducted at the "Headquarters" of the Investigating Authority, de hors the cause of action.

"Such pan-India power being arrogated to the Respondent would militate against the provisions of the CrPC relating to jurisdiction of Magistrates/ Special Judges, and would have the propensity to cause havoc during the course of investigation, and even more, during trial." the petition states

The petition argued that the impugned Order chooses to ignore the clear uncontroverted facts, of which it ought to have taken judicial notice, that the Banerjee is an important opposition leader and is being targeted by political party in Centre by using Central Investigative Agencies.

He is the National General Secretary of the All-India Trinamool Congress Party which is one of the principal opposition parties to the political party in power at the Centre and was a leading figure in Assembly Elections in the State of West Bengal in April/May 2021 wherein TMC comprehensively trounced the political party at power in the Centre, thereby giving justifiable cause to "target" and "fix" Banerjee by misusing the Central Investigation Agencies.