Electoral Bonds Scheme Hits At The Very Core Of Constitution, Which Is Our Democracy : Sr Adv Meenakshi Arora 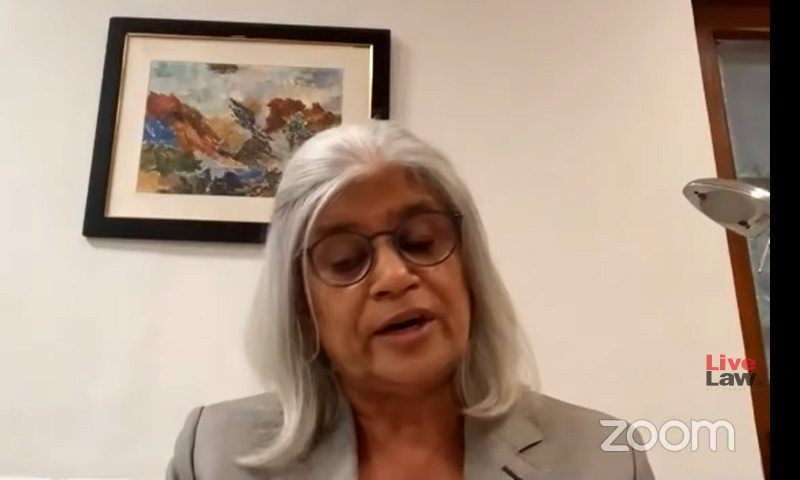 "Electoral bonds have done more of a disservice than any service to us", said Senior Advocate at Supreme Court of India, Meenakshi Arora, at a webinar organized by LiveLaw on the topic "The Courts and Constitutional Values". Responding to a query regarding the disruption caused to the constitutional value of democracy due to the role played by money in elections, Arora...

"Electoral bonds have done more of a disservice than any service to us", said Senior Advocate at Supreme Court of India, Meenakshi Arora, at a webinar organized by LiveLaw on the topic "The Courts and Constitutional Values".

Responding to a query regarding the disruption caused to the constitutional value of democracy due to the role played by money in elections, Arora said :

"Electoral bonds have done more disservice than any service to us. There was a need for transparency in electoral funding to get rid of criminalization as they felt money had an important role to play."

"Reforms came in electoral funding to take black money out of it. What did electoral bonds do? They removed the cap up to 20,000 rupees and the cap for 7.5% profit for a company. Now even if a company is in loss, they can donate money."

She pointed out that the scheme was brought overlooking the serious objections raised by the Election Commission of India and Reserve Bank of India.

"Anonymous electoral bond is a sham in the face of transparency in political funding. This hits at the very core of our constitution, which is democracy", she said.

"The minute money enters into an arena, it leads to an unequal level playing field when it comes to elections. Elections have to be free and fair in a democracy.There can't free and fair elections if there is no even playing field. So you have directly affected the basic root of democracy through this funding procedure. This is not about A political party or B political party. Whichever party is able to manipulate this system will gain advantage".

In this context, Arora stressed on the need to revisit the debate on state-funding of elections.

Arora stated that our Fundamental Rights are derived from the Preamble, but the need of the hour was for people to cultivate the sentiment these rights possessed.

"So, apparently, the values are there in the Preamble and replicated in the Fundamental Rights. At the time of framing of the Constitution, Dr. BR Ambedkar had said that Constitutional Morality was not a natural sentiment and that it had to be cultivated. The values are your sentiments that you cultivate and you actuate it by giving effect to them when you deal with specific cases. No one can give us these rights; they are inherent in us."

Arora presented a situation wherein rights inherent in us had a conflict with statutory rights.

"If there is a conflict in that, then the Constitutional Morality values will overtake the ones in the statutory rights. This is why the term 'Morality and Constitutional Values' is an important facet; it's the guiding light for the manner one should conduct themselves for implementation of any rights."

Arora also highlighted the plight of migrants and said that the crisis was an indication of the failure of the institutions to imbibe the constitutional values of liberty, equality and fraternity.

"Someone completely forgot that we had teeming millions who would face difficulties during the lockdown as they had very meagre resources", she said.

In this connection, she invoked Dr. Ambedkar's statement that democracy in India was only a top-dressing on a soil which was essentially undemocratic.

She also stated that the the enforcement of constitutional liberties is not uniform across all sections of the society. As an example, she mentioned that for a poor person in custody, it is very difficult to secure personal liberty, due to limited access to justice.

Arora concluded the webinar emphasizing the importance of dissent in preserving the democratic spirit.

"We should speak up with a loud voice and it must reach the persons who are adorning those chairs because a public outcry against unconstitutional practices is the best thing that we have in a democracy. We are missing freedom of press, so the only thing we have is our collective voice."