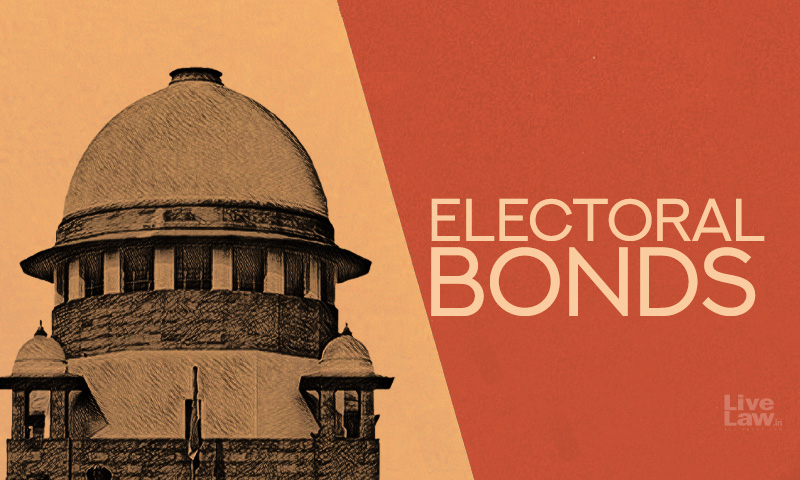 The Supreme Court on Friday refused to stay the release of the fresh set of electoral bonds from April 1 for the assembly polls in West Bengal, Kerala, Tamil Nadu, Assam and Puducherry.The Court dismissed the application filed by NGO Association for Democratic Reforms seeking stay of the bonds.Since the bonds were allowed to be released in 2018, 2019 and 2020 without interruption,...

The Supreme Court on Friday refused to stay the release of the fresh set of electoral bonds from April 1 for the assembly polls in West Bengal, Kerala, Tamil Nadu, Assam and Puducherry.

The Court dismissed the application filed by NGO Association for Democratic Reforms seeking stay of the bonds.

Since the bonds were allowed to be released in 2018, 2019 and 2020 without interruption, and sufficient safeguards are there, there is no justification to stay the electoral bonds at present, the Court said in its order.

"...in the light of the fact that the Scheme was introduced on 2.1.2018; that the bonds are released at periodical intervals in January, April, July and October of every year; that they had been so released in the years 2018, 2019 and 2020 without any impediment; and that certain safeguards have already been provided by this Court in its interim order dated 12.4.2019,we do not see any justification for the grant of stay at this stage.Hence both the applications for stay are dismissed", the Court said in the order.

A bench comprising Chief Justice of India SA Bobde, Justices AS Bopanna and V Ramasubramaniam had reserved order on the application filed by NGO 'Association for Democratic Reforms' on Wednesday.

The bench heard the arguments of Advocate Prashant Bhushan for the petitioner, Attorney General for India KK Venugopal, Solicitor General Tushar Mehta and Senior Advocate Rakesh Dwivedi for the Election Commission of India.

Notably, the Election Commission of India opposed stay of electoral bonds. The ECI said they are not opposed to electoral bonds, but want more transparency. But Electoral Bonds is one step ahead unaccounted cash system, ECI said. The issue of transparency can be considered at the final argument stage, and there should be no interim stay, the ECI's counsel Senior Advocate Rakesh Dwivedi told the SC.

The Court observed that it was not correct to say that the Reserve Bank of India was completely opposed to the electoral bonds scheme in principle, as its objection was only to the form and not its substance.RBI's objection was to the issue of bonds in scrip form rather than in demat form.

The bench also observed that though the scheme provides anonymity, all transactions happen through banking channels in accordance with KYC norms.

"We do not know at this stage as to how far the allegation thatunder the Scheme, there would be complete anonymity in the financing of political parties by corporate houses, both in India and abroad, is sustainable", it observed.

"If the purchase of the bonds as well as their encashment could happen only through banking channels and if purchase of bonds are allowed only to customers who fulfill KYC norms, the information about the purchaser will certainly be available with the SBI which alone is authorised to issue and encash the bonds as per the Scheme. Moreover, any expenditure incurred by anyone in purchasing the bonds through banking channels, will have to be accounted as an expenditure in his books of accounts. The trial balance, cash flow statement, profit and loss account and balance sheet of companies which purchase Electoral Bonds will have to necessarily reflect the amount spent by way ofexpenditure in the purchase of Electoral Bonds".

It said that the Financial Statements of the companies will have to be filed with the Registrar under the Companies Act 2013, and they are accessible to anyone online.

"Since the Scheme mandates political parties to file audited statement of accounts and also since the Companies Act requires financial statements of registered companies to be filed with the Registrar of Companies, the purchase as well as encashment of the bonds, happening only through banking channels, is always reflected in documents that eventually come to the public domain.All that is required is a little more effort to cull out such information from both sides (purchaser of bond and political party) and do some"match the following". Therefore, it is not as though the operations under the Scheme are behind iron curtains incapable of being pierced", the order said.

As regards the concern expressed by the petitioner regarding repurchase of bonds by blackmoney, the Court noted that as per the scheme, the bonds are not tradeable.

"Moreover, the first buyer will not stand to gain anything out of suchsale except losing white money for the black", it added

"The apprehension that foreign corporate houses may buy the bonds and attempt to influence the electoral process in the country,is also misconceived. Under Clause 3 of the Scheme, the Bonds maybe purchased only by a person, who is a citizen of India or incorporated or established in India", the order added.

Prashan Bhushan argued that the anonymous electoral bonds was a scheme to facilitate money laundering and funding by shell companies, and thereby undermined transparency in political funding. Bhushan placed heavy reliance on the concerns expressed by the ECI and the Reserve Bank of India regarding the anonymity of the bonds.

During the hearing, the bench had expressed concerns about the possible misuse of funds procured by political parties through electoral bonds and asked the Centre if it has any control of such use of money.

The CJI also had orally remarked that if the arguments of Bhushan were correct, the law will have to be struck down.