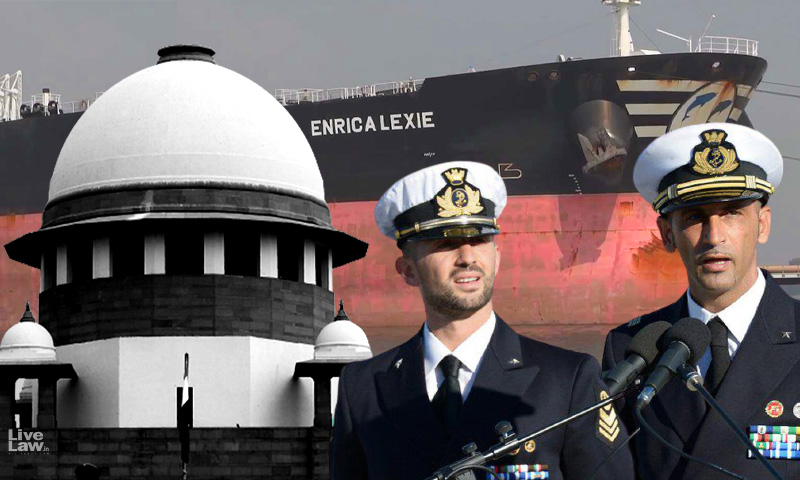 The highly sensational Enrica Lexie -Italian Marines case relating to the killing of two Indian fishermen in a sea-firing incident nine years ago, which at one point sparked off diplomatic frictions between India and Italy, has attained a peaceful burial, at least as far as local proceedings are concerned.The Supreme Court today quashed the criminal cases against the two Italian...

The highly sensational Enrica Lexie -Italian Marines case relating to the killing of two Indian fishermen in a sea-firing incident nine years ago, which at one point sparked off diplomatic frictions between India and Italy, has attained a peaceful burial, at least as far as local proceedings are concerned.

The Supreme Court today quashed the criminal cases against the two Italian Marines --Massimilano Latorre and Salvatore Girone -accepting the additional compensation of Rupees 10 crores offered by the Republic of Italy to the victims of the 2012 sea-firing incident which took place near Kerala coast.

The Government of India urged the Court to invoke the extraordinary power under Article 142 of the Constitution to quash the criminal cases against Marines, as the international tribunal under the United Nations Convention on Law of Seas had ruled that India lacks the jurisdiction to criminally prosecute them. The Union Government told the Court that it has decided to accept the international award and also Italy's offer to pay additional compensation of Rupees 10 crores to the victims.

The case has witnessed dramatic twists and turns, and even became an election issue in the 2014 Lok Sabha polls, with the then PM-candidate Narendra Modi accusing the the Central Government of failing to protect the interests of Indian victims against Italian authorities.

Here is a brief time-line of the case:

At about 4.30 PM, at a distance of about 20.5 nautical miles from the coastline, the boat happened to pass "Erica Lexie", a tanker flying the Italian Flag. Two marines aboard the ship - Massimilano Latorre and Salvatore Girone - mistook 'St Antony' for a pirate boat, and opened fire at it. This resulted in the death of two fishermen - Valentine Jalastine and Ajesh Binki.

Enrica Lexie continued its sail, as if nothing happened. When the vessel had proceeded about 38 nautical miles on the High Seas towards Djibouti, it received a message from the Maritime Rescue Co - ordination Centre, Mumbai, asking it to return to Cochin Port to assist with the enquiry into the incident. Responding to the message, the ship altered its course and came to Cochin Port on 16th February, 2012. Upon docking in Cochin, the Master of the vessel was informed that an First Information Report (FIR) had been lodged with the Circle Inspector, Neendakara, Kollam, Kerala, under S.302 read with S.34 of the Indian Penal Code (IPC) in respect of the firing incident leading to the death of the two Indian fishermen.

Two marines were arrested by the Circle Inspector of Police, Coastal Police Station, Neendakara, Kollam, from the vessel.

Admirality Suits are filed in the Kerala High Court by the heirs of the deceased fishermen seeking compensation from the vessel 'Enrica Lexie'.

The admirality suits filed by the heirs of the deceased and the victims reach out-of-court settlement, with Republic of Italy offering compensation to them. The family members of the deceased -- Valentine Jalastine and Ajesh Binki - reached a compromise with Italian authorities and each accepted Rs one crore compensation. The owner of the boat, Freddie, also settled his compensation suit accepting Rupees 17 lakhs from the ship authorities.

Republic of Italy files writ petition before the Supreme Court under Article 32 challenging the criminal jurisdiction exercised by India against the Marines.

Supreme Court allows Enrica Lexie to leave India, with the remaining crew(other than the two accused Marines). The Court asked the owner of the vessel to execute a bond of Rupeees 3 crores before the High Court of Kerala undertaking to produce the vessel and ensure the appearance of the crew as and when called by the police or the trial court. Republic of Italy assured the Supreme Court that it if the need for the presence of the remaining crew arises during the investigation or the trial, it will ensure the same.

A division bench of the Supreme Court comprising Justices Altamas Kabir and J Chelameswar delivers in the case Republic of Italy and others vs Union of India and others(WP(c) 135/2012).

India's criminal jurisdiction over the Marines was upheld. The Court did not accept Italy's argument of sovereign immunity.

At the same time, the Court held that State of Kerala has no jurisdiction to investigate into the incident. This was on the reasoning that only Union Government had jurisdiction over Contigous Zone under the Maritime Zones Act.

The Union of India was, therefore, directed, in consultation with the Chief Justice of India, to set up a Special Court to try the case. The pending proceedings before the Chief Judicial Magistrate, Kollam, were ordered to be transferred to the Special Court to be constituted in terms of the judgment.

The judgment also reserved the right of Italy to raise the issue of exclusive jurisdiction over marines before the Special Court in terms of Article 100 of the UNCLOS, which speaks of rights of States to take special measures to combat privacy.

Following the judgment, the investigation of the case was taken over by National Investigation Agency from Kerala police. The trial was transferred to a special court set up in New Delhi.

In February 2013, the SC had allowed the marines to go to Italy for a brief period to vote in the general elections. Italy later went back on its undertaking that it will ensure the return of marines after the period of stay allowed by the SC.

This triggered a diplomatic stand-off, with India restraining the then Italian ambassador, Daniele Mincini, from leaving the country. Following diplomatic pressures, Italy returned the marines to India in March 2013.

September 2014 : One of the Marines seeks permission to go to Italy for treatment

In September 2014, Latorre, one of the marines filed an application in the Supreme Court seeking permission to return to Italy for medical treatment; he had suffered a stroke the previous month. The SC, on humanitarian grounds, allowed him to go to Italy for a period of four months. This period was subsequently extended by the SC from time to time.

In July 2015, Italy took the case to International Tribunal for the Law of the Sea, an independent judicial body under the UNCLOS.

On August 24, 2015, the ITLOS asked both India and Italy to suspend all court proceedings and to refrain from initiating new ones which might "aggravate or extend the dispute or might jeopardize or prejudice the carrying out of any decision which the arbitral tribunal may render in future". This was ordered as a provisional measure, pending the final adjudication of the issues of the case, including the one on jurisdiction.

The tribunal also said it was aware of the grief and suffering of the families of the two Indian fishermen who were killed and also of the "consequences that the lengthy restrictions on liberty entail for the two Marines and their families".

Following this, the SC suspended the trial of the case in India.

The ITLOS later referred the matter to the Permanent Court of Arbitration, an intergovernmental organisation based in The Hague in Netherlands.

Before the PCA, Italy sought the relaxation of bail conditions for Girone, the second marine, so that he could leave India until the jurisdiction in the case is decided.

Though the Court did not expressly grant this prayer, it observed that, "Italy and India shall cooperate, including in proceedings before the Supreme Court of India, to achieve a relaxation of the bail conditions of Sergeant Girone … so that Sergeant Girone, while remaining under the authority of the Supreme Court of India, may return to Italy during the present arbitration."

In May 2016, the SC allowed the second marine, Girone to leave to Italy. Before leaving, he was asked to give an affidavit "accepting and recognising that he remains and shall, even upon his departure from India, continue to remain under the authority of the Supreme Court of India."

In September that year, the Centre told the Supreme Court it has no objection if the two Italian marines are allowed to remain in Italy until India's jurisdiction to try them is decided.

Based on this, on September 28, 2016, a bench comprising Justices Anil Dave, Kurian Joseph and Amitava Roy allowed the marines to remain in Italy during the pendency of the case in Permanent Court of Arbitration.

The Permanent Court of Arbitration, in Enrica Lexie case, unanimously holds that India is entitled to claim compensation from Italy. It also held (by 3:2 majority) that the Marines are entitled to immunity in relation to the acts that they committed during the incident of 15 February 2012, and that India is precluded from exercising its jurisdiction over the Marines.

Soon after the award was passed by the Permanent Court of Arbitration, the Union Government files an application in the Supreme Court saying that it has decided to accept the award. The Centre urged the Court to close the pending cases in the light of the award.

August 2020 : Will not quash the cases without hearing the victims

A Supreme Court bench led by the then CJI SA Bobde tells the Central Government that the cases against the marines will be quashed only after hearing the victims. Notice issued to the victims.

August 2020 : Permanent Court of Arbitration publishes the reasons for its award (may be read here)

The Centre informs the Supreme Court that following negotiations, Republic of Italy has agreed to pay additional compensation of Rupees 10 crores. Kerala Government informs the Court that the victims were agreeable to the amount (Rupees 4 crores each to the families to two deceased fishermen, 2 crores to the boat owner).

Supreme Court says that it will quash the cases only after the compensation amount is deposited before it. Centre agrees to deposit the amount with the Supreme Court registry as soon as it is received from Italy.

On June 15, 2021, a vacation bench comprising Justices Indira Banerjee and MR Shah passes an order quashing the criminal cases pending against the marines.

The Court directs the transfer of the amount of Rupees 10 crores - deposited with the Supreme Court Registry - to the High Court of Kerala.

The top court requested the Chief Justice of Kerala High Court to nominate a Judge to pass appropriate order of disbursement to protect interest of heirs & ensure it's recieved by them.

The Bench noted that noted Owner of damaged Boat, Union of India, State of Kerala and heirs of deceased have agreed to accept the award.

"We are satisfied that the amount of 10 crores over and above ex gratia already submitted can be said to be a reasonable amount of compensation and in interest of heirs. We are of the view that this is a fit case to close all proceedings in India including criminal proceedings, in exercise of powers under Article 142 of the Constitution. FIR 2/2012 quashed and set aside, and all proceedings therefrom are quashed", the bench said.

The Supreme Court also observed that Republic of Italy should resume its criminal proceedings against the Marines in Italy in terms of the international award, and that Government of Republic of Italy, UOI and Kerala government should coordinate with each other in respect to disbursement of compensation.