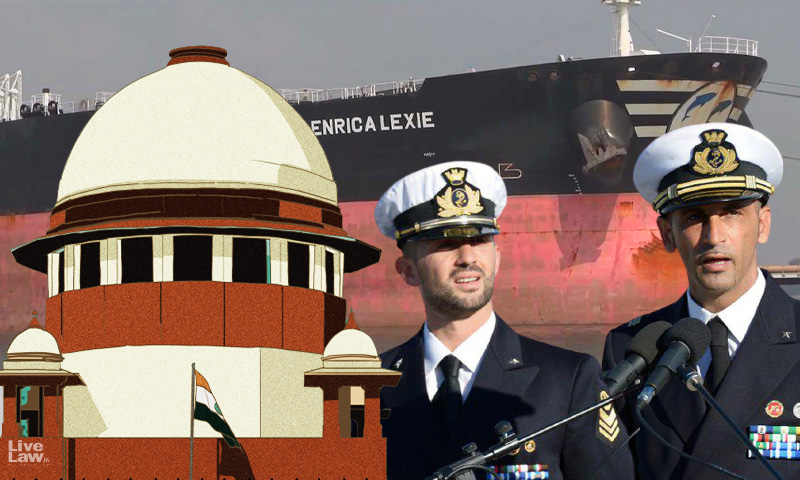 In a significant development in the Enrica Lexie case, Supreme Court on Thursday ordered a stay on the disbursement of the compensation of 2 crores to the owner of the boat named "St Antony" which was attacked by the Italian Marines in the 2012 sea-firing incident.The Court has requested the Kerala High Court to not disburse any amount to the boat owner in terms of the Supreme Court's 15th...

In a significant development in the Enrica Lexie case, Supreme Court on Thursday ordered a stay on the disbursement of the compensation of 2 crores to the owner of the boat named "St Antony" which was attacked by the Italian Marines in the 2012 sea-firing incident.

The Court has requested the Kerala High Court to not disburse any amount to the boat owner in terms of the Supreme Court's 15th June order which had directed the disbursement of the amount deposited by the Republic of Italy.
A division bench comprising Justice Indira Banerjee and Justice V Ramasubramanian was hearing an application filed by seven fishermen who were on board the fishing boat which was attacked, seeking compensation out of the amount of Rupees 2 crores, which the Republic of Italy has deposited in favour of the owner of the boat.
The bench has directed notice of the present application to be given to Boat Owner, returnable in two weeks.
During the hearing today, Advocate Manish Dembla appearing for the 7 crew members submitted that no compensation has been directed to be paid to them, and are therefore seeking a stay in the disbursement of amount to the Boat owner.
The bench stated that if compensation is being sought out of the compensation to be paid to boat owners of St Antony, they need to be made a party.
Solicitor General Tushar Mehta suggested that since the Kerala High Court has been directed by this top Court to disburse the amount, so the applicants can approach the Kerala High Court for apportionment.
The bench said that it will be difficult to modify its previous order without giving notice to the boat owner.
"Then give notice to boat owner and come, we will suitably modify the order" the Bench orally observed.
The present plea has been filed seeking a stay on the disbursement of the compensation amount till their claims are determined.
The fresh application has been moved on behalf of 7 persons, who were among the 12 fishermen who were travelling in the 'St.Antony' boat, which faced the sniper attack from Italian Marines in February 2012 at sea waters near Kerala coast. The applicants say that they were also injured in the incident and are therefore entitled to compensation.
The application was filed on July 7, after the Supreme Court's order of June 15 which quashed the criminal proceedings pending in India against two Italian Marines -Massimilano Latorre and Salvatore Girone - with respect to 2012 sea-firing incident which killed two Indian fishermen. The Supreme Court quashed the criminal proceedings accepting the compensation of Rupees 10 crores deposited by the Republic of Italy.

The Bench had directed that the amount of Rs. Ten Crores lying with the Registry Supreme Court be transferred of High Court of Kerala, out of which Rupees Four Crores be paid to the heirs of the two fishermen who got killed in the incident and Rs. Two crores to the owner of the St. Antony boat.

Further, the Court had requested the Chief Justice of the Kerala High Court to nominate a Judge to pass appropriate order of disbursement/investment of the amount to be paid to the heirs of each deceased ( 4 Crores each) so as to protect the interest of the heirs and ensure that the compensation is duly received by the heirs and not diverted or misappropriated.

The Supreme Court also observed that the Republic of Italy should resume its criminal proceedings against the Marines in Italy in terms of the international award, and that Government of Republic of Italy, UOI and Kerala government should coordinate with each other in respect to disbursement of compensation.

A vacation bench comprising Justice Indira Banerjee and Justice MR Shah had passed the order in an application filed by the Central Government to quash the criminal proceedings pending in India against the marines.

The Centre had previously told the Supreme Court that according to the ruling of the Permanent Court of Arbitration under the United Nations Convention On Law of Seas, India has no jurisdiction to launch criminal prosecution against the Italian Marines over the sea-firing incident. Therefore, the Solicitor General had requested the Supreme Court to quash the cases invoking powers under Article 142 of the Constitution, as the trial court cannot act on the international award.

In July last year, the Permanent Court of Arbitration(PCA) under the United Nations Convention of Law of Seas had ruled that India was entitled to claim compensation from Italy for the death of Indian fishermen. However, the International Tribunal also held that India has no jurisdiction to launch criminal prosecution against the Marines as they had sovereign immunity.

Following that, the Centre had informed the Supreme Court that it was accepting the award of the PCA and sought to quash the pending cases against the Marines.

The incident happened on February 15, 2012, at a distance of about 20.5 nautical miles from the Kerala coastline. A fishing boat 'St Antony' happened to pass "Erica Lexie", a tanker flying the Italian Flag. Two marines aboard the ship - Massimilano Latorre and Salvatore Girone - mistook 'St Antony' for a pirate boat, and opened fire at it. This resulted in the death of two fishermen - Valentine Jalastine and Ajesh Binki.

Kochhar & Co. (the "Firm") represented 7 fishermen who were a part of the crew of the Indian boat St. Antony on which two Italian Marines had fired in 2012 leading to the death of two fishermen.