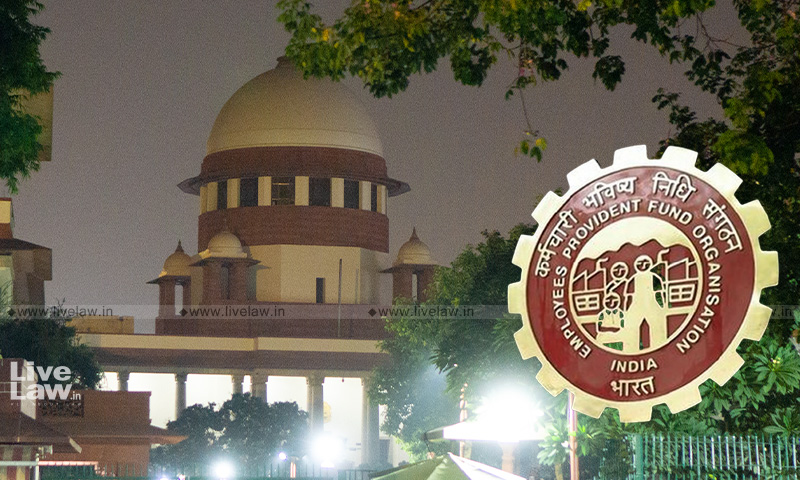 x
A 3-judge bench has started hearing the appeals filed by EPFO.

EPFO, appearing through Senior Advocate Aryama Sundaram made the submission before Justices UU Lalit, Aniruddha Bose and Sudhanshu Dhulia. The Bench was hearing a batch of appeal pleas filed by the Employees Provident Fund Organization (EPFO) in the issue related to payment of EPF pension to employees in proportion to their salary.

The appeals were specifically challenging the judgments of Kerala, Delhi and Rajasthan High Courts which had quashed the 2014 Amendment Scheme.

The Kerala High Court, in 2018, had set aside Employee's Pension (Amendment) Scheme, 2014 that capped maximum pensionable salary to Rs.15, 000 per month, observing that it is unrealistic and would deprive most of the employees of a decent pension in their old age. Last year, a 2-judge bench of the Supreme Court had referred the appeals to a 3-judge bench to consider the following issues :

1. Whether there would be a cut-off date under paragraph 11(3) of the Employees' Pension Scheme and

2. Whether the decision in R.C. Gupta v. Regional Provident Fund Commissioner (2016) would be the governing principle on the basis of which all these matters must be disposed.

Arguments of EPFO on Tuesday

"It(HC) incorrectly assumes that all members of the EPF must inevitably be entitled to all benefits of the Pension Fund. This is incorrect. In EPF, employees and employers' contributes a cumulative in the individual account, and consequently determines the benefits mainly the Provident Fund Cumulation. But EPS is meant for weaker section of the Indian workforce whose contributions are inadequate to yield proper retirement benefits. Therefore, the benefits therein, is defined in advance and consequentially, the rate of contribution is determined annually. The impugned judgement overlooks this important difference and declares it all members of the EPFS who are contributing above the base threshold EPFS, are entitled to the contribute above the base threshold in EPS and consequentially draw pension on the basis of such higher contributions. Further, it also ignores that the contributions in EPS must be made contemporaneously… and permits former members of the EPS to offer retrospective contributions."

During the hearing, Sundaram primarily argued that employees drawing salary above the threshold of Rs 15,000 per month can be entitled to the Pension only if they make contributions after making a joint application with the employer within the cut-off period.

"What they (the respondents) are seeking is that they did not contribute every month, and after the lapse of 10, 20 or 30 years, whatever they have not paid that that point in time, you please take that now in one go and fix my pension. Such kind of an arrangement is not permitted under the scheme", Sundaram submitted.

Further, Sundaram submitted that there are two necessary aspects with regard to EPS.

"First is that the option must be exercised by both employer and employee. In this case, employee does not exercise the option even prior to 2014 Amendment. Two, there must a remitting of money into the Pension Fund within 15 days. Why do you do with a person who does not exercise this option?.....The (Kerala) High Court says no-no and strikes down the Amendment. And applying the proviso, gave it to people who did not opt at that time and gave them the right to opt later. (It said that) opting is not necessary because Pension Fund is a necessary corollary of the Provident Fund. According to High Court you are a member of the provident fund, then ipso facto, you are member of the Pension Fund….."

"While I want to show that the Amendment is correct, even without the 2014 Amendment, the Kerala High Court Judgement is wrong", Sundaram submitted.

On the other hand, the obligation under the Pension Scheme would begin after the employee retired.

Also, it would be for the operators of the Pension Scheme to invest amount deposited in such a way that after the retirement the invested amount would keep on giving sufficient returns so that the pension would be paid to the employee not only during his life time but even to his family members after his death.

During the hearing, the bench posed queries to Sundaram regarding the scheme of the 2014 amendment. He explained that the newcomers after the 2014 amendment are not entitled to pension if the monthly salary is above Rs 15,000. As regards existing employees who draw salary above the threshold, they are entitled to EPF pension only if they exercise the option within the cut-off dates and make contributions.

"The rationale is that EPS is meant to ensure a minimum of guaranteed retiral benefits to the vulnerable members of EPFS", he said.

Sundaram said that there is no petition filed by a new-comer challenging the denial of pension and the petitions are filed by those who were members at the time of 2014 amendment and most of them have not even made their contributions to EPS.

The senior counsel submitted that the 2014 amendments were brought on the basis of sufficient materials from accounting experts showing the imbalance created within the fund and the Courts could not have second-guessed the expert opinion. There is no issue of discrimination as the classification is based on an intelligible differentia which has a nexus with a rational objective, he emphasised.

As the hearing moved to a close, the Bench told Sundaram that he would be allowed to make further submissions, if any, by way of a rejoinder. The Bench also asked the other counsel to wrap up their submissions in a time-bound manner, the coming days.

"You (Union of India) please finish your arguments by 1 pm", the Bench said.

The Union of India is expected to make arguments today in the matter.

The Kerala High Court, while setting aside the 2014 amendments by its 2018 judgment, had declared that all the employees shall be entitled to exercise the option stipulated by paragraph 26 of the EPF Scheme without being restricted in doing so by the insistence on a date.

Further, the High Court had also set aside the orders issued by the EPFO declining to grant opportunities to the employees to exercise a joint option to remit contributions to the Employees Pension Scheme on the basis of the actual salaries drawn by them.

In April 2019, the Supreme Court had dismissed the special leave petition filed by the EPFO against the Kerala High Court's judgment, through a summary order.

Later, in January 2021, a three-judge bench recalled the dismissal order in the review petitions filed by the EPFO and posted the matters for hearing in open court.

On February 25, 2021, the division bench of Justice UU Lalit and Justice KM Joseph restrained the High Court of Kerala, Delhi and Rajasthan from initiating contempt proceedings against the Central Government and the EPFO over the non-implementation of the HC verdicts.