EPF Pension Case: Supreme Court To Consider If Reference To Larger Bench Is Needed In View Of 'RC Gupta' Decision 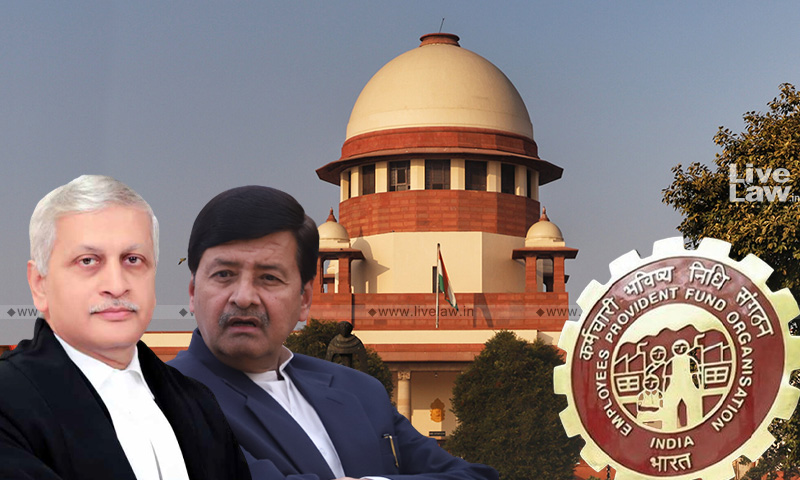 x
The bench said that it was of the prima facie view that EPFO has made out a case.

The Supreme Court on Wednesday decided to consider the issue whether to refer to a larger Bench, the appeals filed by Employees Provident Fund Organization and others including Union of India, challenging the judgments of various High Courts which quashed the Employee's Pension (Amendment) Scheme, 2014.A Bench of Justice UU Lalit and Justice Ajay Rastogi observed that it will consider if they...

The Supreme Court on Wednesday decided to consider the issue whether to refer to a larger Bench, the appeals filed by Employees Provident Fund Organization and others including Union of India, challenging the judgments of various High Courts which quashed the Employee's Pension (Amendment) Scheme, 2014.

A Bench of Justice UU Lalit and Justice Ajay Rastogi observed that it will consider if they are of a prima facie view that the matter needs to be heard by a three-judge Bench and accordingly pass an order by Tuesday, August 24.

The question of referral came up in consideration of submissions made by Senior Advocate C Aryama Sundaram on behalf of the EPFO, with regards to the top Court's judgement in the case of R.C. Gupta and Ors. v Regional Provident Fund Commissioner, Employees' Provident Fund Organisation and Ors, which was delivered by a coordinate bench of 2-jude bench.

Sundaram made detailed submissions before the Court regarding the RC Gupta judgement as to how it did not consider certain aspects including the necessity of remittance, pension scheme being completely different from the provident fund regime, etc and therefore can only be relied upon to a limited extent in the present case.

"Our difficulty is that whether there is reasoning or no reasoning, the final conclusion of RC Gupta is that irrespective of whatever time has elapsed, there is no cut off date and it is permissible for somebody to pay arrears for months gone by and have right to switch over to provident fund scheme, to pension fund scheme."

The bench observed that it cannot ignore a ruling laid down by a coordinate bench.

In R.C. Gupta and Ors. v Regional Provident Fund Commissioner, Employees' Provident Fund Organisation and Ors, which was decided by a Bench led by Justice Gogoi in October 2016, the Supreme Court had struck down the six-month opt-in window from 1 September 2014, for employees to continue making uncapped pension contributions.

Today, the bench observed that it cannot go into the question whether RC Gupta is correct or not.

"There is one school of thought that whatever RC Gupta has laid down, whether it was discussed or not, their Lordships are certainly of the view that it hardly matters and is mere adjustment from one account or the other. Whether that sentence is correct or not we are not going into that. This is the basic fulcrum of the judgement. They also say, the cut off date has no significance as it is a mere adjustment, and in any case you are entitled to the money, so if you take it from left or right hand it is your money, that is how they have perceived. Whether its correct is a different issue."

The bench wondered if it will be proper on its part to consider the issue in variance with the decision in RC Gupta. If any doubt is raised regarding the said decision, the bench said the proper course might be to refer it to a larger bench.

"When one of the issues on which you may hang your case is RC Gupta and if you are having doubts about that, will it be proper on our part to continue hearing that rather than refer it to Bench of three judges who will not be hindered by any such consideration and can then bestow attention without being bothered by any kind of value of RC Gupta as a precedence, as they are a larger Bench." Justice Lalit said.

"Your endeavour is to say that matter is concluded by RC Gupta but In case we feel RC Gupta has perhaps not taken an aspect into account, like the judgement in Pawan Hans, which has stated that invested money lying in pension fund has a different characteristic and if we come to that level, we will be taking a diametrically opposite view." the bench told the respondents.

The Bench clarified that it is not saying anything as to whether the judgement is correct, good or bad, all it is saying is that a doubt may come up.

"All we are asking is will it be worthwhile for us to spend two-three more days and arrive at that conclusion or we should refer to a three judge bench now." the Bench asked the Counsels.

Senior Advocate R Venkatramani, appearing for one of the respondents, suggested that " If by any reason and in any manner RC Gupta has to be doubted, its relevance or applicability, then it has to be referred to three judges. And if entire fulcrum of case is on principle that there is no difference between provident and pension fund there is a principle of law settled in RC Gupta."

Senior Advocate Meenakshi Arora, appearing for one of the respondents, pointed out that the Government accepted RC Gupta's judgement and issued a letter to implement RC Gupta which is a significant aspect and needs to be considered. However, later they tried to create an arbitrary distinction saying that it will be extended to those who are not in an exempted organisation, she added.

"As of now, prima facie we think Mr Sundaram has a case, what do we do now", the bench said.

Responding to the Court's statement, Senior Counsel Gopal Sankaranarayanan opined that there are certain provisions that have not been drawn to the court's attention or otherwise the prima facie view wouldn't have come. Pointing to para 26 of the Pension Scheme and para 52 of the Provident Scheme regarding how money is invested, he said that almost all respondents before the court are people who have fully contributed on actual salary completely, which is why RC Gupta's last paragraph calls only for an adjustment, which is the exact thing they are doing.

Justice Rastogi further added that " If we go through the entire pension scheme with the amendments introduced what Mr Sundaram has said has sum and substance to it. We can't completely say NO".

Mr Sankaranarayanan then suggested that instead of referring the case to a three-Judge Bench, the Court may frame a question regarding correctness of RC Gupta's judgement and if the court finds that RC Gupta cannot be justified by the Respondents, the matter may be referred.

"RC Gupta alone is not the plank of our arguments. Our arguments will be in consistence with it." he said.

To this, Mr Sundaram responded saying that,

"They think that they will persuade the Court that RC Gupta is right. The question is if i convince you to the contrary, will your Lordships be able to write a judgement? They will be substantiating why RC Gupta is right and i will substantiate why it's wrong. And then again question of reference will come up."

Advocate Rohan Thawani submitted that RC Gupta was never sought to be reviewed as neither EPFO or Union of India ever filed a review. The arguments can be dealt with without disturbing RC Gupta

In RC Gupta's Case, the Bench had said that the date of commencement of the Scheme or the date on which the salary exceeds the ceiling limit under 11(3) of the Pension scheme are dates from which the option exercised are to be reckoned with for calculation of pensionable salary, and are not cut-off dates to determine the eligibility of the employer-employee to indicate their option under the proviso to Clause 11(3) of the Pension Scheme.

It observed that a beneficial scheme, ought not to be allowed to be defeated by reference to a cut-off date, particularly, in a situation where the employer had deposited 12% of the actual salary and not 12% of the ceiling limit.

The Kerala High Court, while setting aside the 2014 amendments by its 2018 judgment, had declared that all the employees shall be entitled to exercise the option stipulated by paragraph 26 of the EPF Scheme without being restricted in doing so by the insistence on a date. Further, the High Court had also set aside the orders issued by the EPFO declining to grant opportunities to the employees to exercise a joint option to remit contributions to the Employees Pension Scheme on the basis of the actual salaries drawn by them.

In April 2019, the Supreme Court had dismissed the special leave petition filed by the EPFO against the Kerala High Court's judgment, through a summary order. Later, in January 2021, a three-judge bench recalled the dismissal order in the review petitions filed by the EPFO, and posted the matters for hearing in open court.

On February 25, 2021, the division bench of Justice UU Lalit and Justice KM Joseph restrained the High Court of Kerala, Delhi and Rajasthan from initiating contempt proceedings against the Central Government and the EPFO over the non-implementation of the HC verdicts. The bench also posted the matters for final hearing.

(Case Title : The Employees Provident Fund Organization and others v.Sunil Kumar B and others - SLP(c) No.8658-8659/2019 and connected cases)