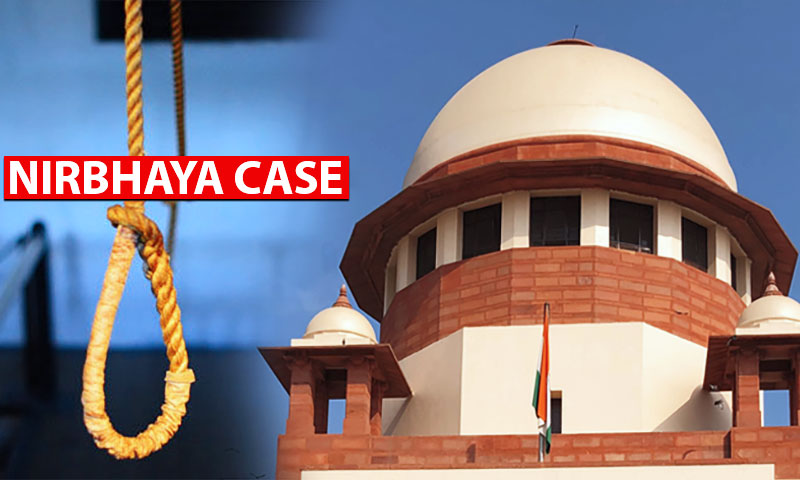 Sessions Judge Satish Arora of Patiala House Courts, Delhi has already issued a fresh death warrant for the execution of the four convicts in the case on February 1 at 6am.

The apex court has dismissed the curative petitions of Vinay Sharma and Mukesh, two of the other four convicts awaiting execution of death penalty in the Nirbhaya gang rape-murder case.

The Petitioner submits that the placement of the "collective conscience of the society" and public opinion within the judicial matrix of the determination of the case has prejudiced the Petitioner and his co-accused and amounted to a back-door entry of the media frenzy which has followed this case from the beginning.

"The present curative petition is also filed in recognition of the increasingly unsustainable judicial demand for the death penalty in light of the severely inconsistent application of its imposition by this Hon'ble Court. It is public information that there have been as many as 17 cases involving rape and murder in which various three judge benches of this Hon'ble Court have commuted the sentence of death. Many of these cases have involved rape and murder of minors. One such case (RP(Crl.) No. 324 of 2015, Order dated 01.11.2018) even involved the gang-rape and murder of a minor where death penalty was commuted to life imprisonment of 20 years RI in review jurisdiction by this Hon'ble Court on the basis that the convict did not have a prior criminal history and could still have the possibility of reformation. To this Court which routinely hails the rights all participants of the criminal justice system uninfluenced by majoritarian and media driven narratives, this inconsistency should cause an appropriate judicial answer".

The petitioner also submits that the impugned judgment does not provide any reasons for imposing the sentence of death and rejecting the alternative of imposing a fixed term sentence as provided in Union of India v. V. Sriharan [Union of India v. V. Sriharan, (2016) 7 SCC 1. Why such a remedy of a 'full life term' is available for those such as Swami Shraddhananda who was proven to plan out an elaborate crime across days showing extensive pre-meditation against a woman, for an ulterior motive, in a plan which involved unspeakable planned brutality existent both moments before and days after the crime, but not available for poor people like the Petitioner whose actions in four hours have made the Petitioner deserving of being killed by the state is beyond understanding to the Petitioner and beyond explanation by the Supreme Court.

"The impugned judgment does not have any explanation why the alternative of life imprisonment without the possibility of parole until the exhaustion of natural life is unquestionably foreclosed in case of the Petitioner. Additionally, the fact that the Petitioner has a wife and children in Aurangabad Bihar who he was supporting through a menial existence in New Delhi has been erroneously rejected as a mitigating circumstance. It is a gross miscarriage of justice that the Petitioner is going to bear the burden of the country proving to itself that it is safe for women by carrying out an act of brutality, despite the extent of torture already imposed upon the Petitioner in jail or even his impending death having no connection or impact to other instances of rape or murder which this country aims to tackle".

The Petitioner alleges that the impugned judgment has been occasioned by reliance on overruled law and that new and changed circumstances would mean that non-interference with the impugned judgement would result in gross miscarriage of justice.

This Hon'ble Court has in paras 354 and 503 has relied on Rajendra Pralhadrao Wasnik v. State of Maharashtra, (2012) 4 SCC 37 to impose the sentence of death. However, Wasnik's case has been subsequently overruled by this Hon'ble Court in Rajendra Pralhadrao Wasnik v. State of Maharashtra (Review Petition (Criminal) Nos. 306-307 of 2013 in Criminal Appeal Nos. 145-146 of 2011) through judgment dated December 12, 2018 and the sentence of death imposed was commuted to one of life imprisonment. These inconsistences have not received the appropriate attention of this Hon'ble Court during review proceedings.

Petitioner also submitted that after the pronouncement of the impugned judgment there have been as many as 17 cases involving sexual violence and murder in which various three judge benches of Supreme Court have commuted the sentence of death.

It is also submitted that that the impugned judgment places erroneous reliance on the collective conscience of society. At para 486, it is held:"It is expected of the courts to operate the sentencing system as to impose such sentence which reflects the social conscience of the society. While determining sentence in heinous crimes, Judges ought to weigh its impact on the society and impose adequate sentence considering the collective conscience or society's cry for justice."