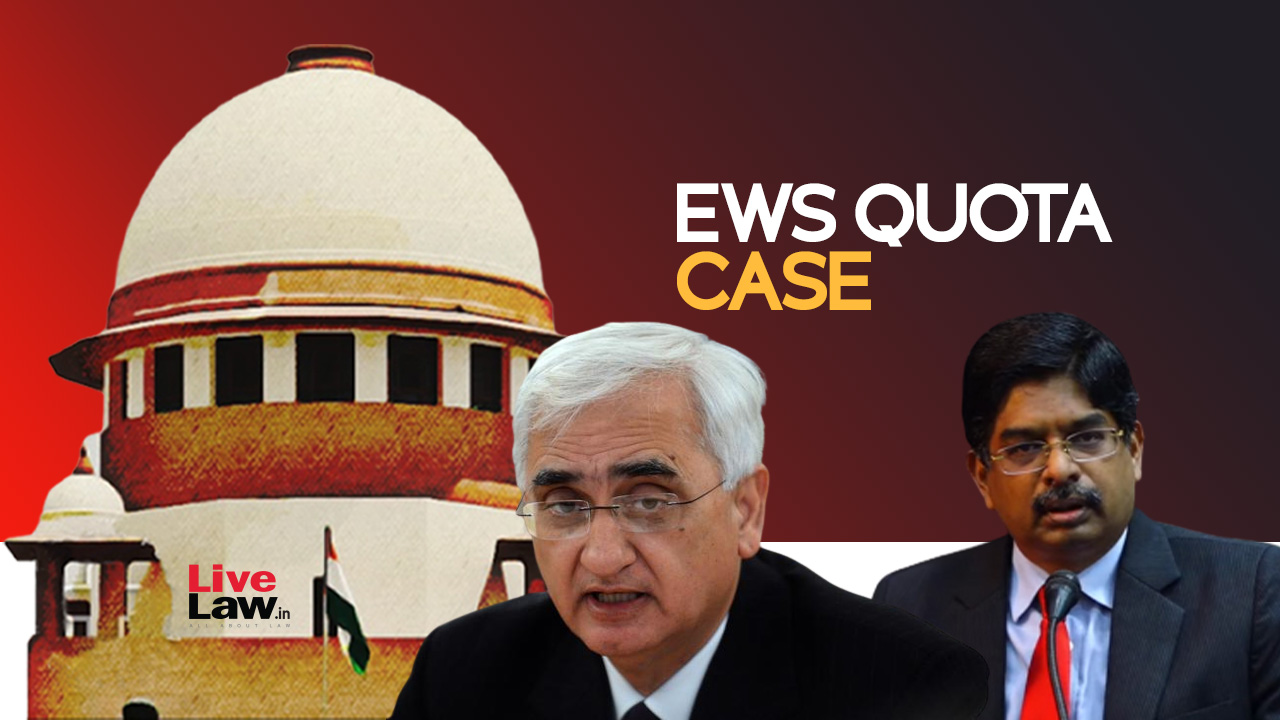 "Under Article 14, reasonable classification is what you have upheld. Nexus should be achieved and object must be reasonable. The first point I wish to make is that the entire list of reserved category of citizens in our country is based on caste. We don't look at caste for any other purpose except for purpose of constitutional support. In the list of Mandal commission, every protected class is based on caste"

He submitted that to understand the parameters on which caste was converted to class, reference must be made to Indira Sawhney v. Union of India, where the reference made was to communities and not to class. He said–

"Class is the second stage which one will reach after examining communities...There is an overlap between class and caste."

While continuing his arguments on affirmative action, he relied upon international jurisprudence on the issue. He submitted–

"I am conscious of the fact that your lordships have said that American decisions may not be exactly but periodically you do refer to them...In the US, in some regions when quotas are not used, minorities are given special provisions...They said you cannot exclude someone on basis of reservations but you can take into account race and give special preference to them."

To this, Justice Bhat remarked–

"This may not be good law there as racial tie breaker is frowned upon now as they have said that their Constitution is colour blind."

However, Sr. Adv. Khurshid stated that the tie breaker and alternative approach in the US and Europe was common. He also gave an example of Israel in this context, where in certain cases some reservations were made to promote gender justice. He referred to this policy of Israel as a "class based affirmative action policy" which emphasised upon structural disadvantages and made institutions more diverse than they otherwise would have been.

Thus, he submitted that diversity could be one of the many reasons why affirmative action was taken in different countries.

"One law for lion and ox is oppression": Sr. Adv. P. Wilson

Sr. Adv. P Wilson started his arguments by quoting William Blake – "One law for lion and ox is oppression." He stated–

"That is what I want to say about reservations for SC/ST/OBCs and EWS on other hand."

He submitted that the 103rd amendment granted reservation to upper castes and this was violation of the basic structure of the Indian Constitution. He also submitted that the said amendment constituted a "mockery on idea of affirmative action" and was violative of Article 14. He added that the classification of EWS was neither reasonable nor valid and failed the "guided test" as laid down under Nagaraj v. Union of India.

To supplement his arguments, Wilson referred to the Office Memorandum which was challenged in the Indira Sawhney judgement. He drew parallels between the said O.M. and the 103rd amendment and stated that the two were similar in nature. He further submitted–

"While extending the benefit of reservation to the socially and economically backward class and for removal of creamy layer, economic criterion can also be looked into. But it is not open for the State to make any reservation for section of citizens in unreserved category, only on the ground that section of such category of citizens belong to economically weak. As the economically weaker sections among unreserved category cannot constitute as homogeneous group for the purpose of reservation and such reservation will not withstand to the scrutiny of twin test under Article 14 of the Constitution of India..."

He continued quoting from the judgement and stated–

"It is clear that in the aforesaid judgment, the Hon'ble Supreme Court has held that economic criteria cannot be the criterion for the purpose of determination of social backwardness. Further, even with regard to cap of percentage of reservation, from the above said judgment, it is clear that reservation cannot exceed 50% and 50% shall be the rule. Exception is carved out only in certain extraordinary situation, as referred in the above paragraph, to make some departure by some relaxation. As we do not find any such extraordinary circumstance for making departure to 50% of reservation, we hold that reservations exceeding 50% by virtue of the impugned Ordinance also cannot be sustained."

He further cited Ashok Kumar Thakur v. Union of India to stated that the non exclusion of creamy layer and inclusion of forward classes violated equality. He the submitted–

"I will now take you to Articles 15(6) and 16(6). Your Lordships have the benefit of statement of objects and reasons but one has to read the article itself. If we read article 15(6), the definition of EWS is not found in 15(6). My lord, my submission is that this article leaves entirely to the discretion of the state to notify who all will be EWS that too from time to time. This affronts the guided theory in Nagaraj. Tomorrow we'll ask what is economically weaker; they'll say it's people without a car...So far as SC/ST/SEBCs are concerned, the constitution is overseeing their reservation by virtue of 366(24), 366(25), 338, 340,341. For EWS there is noone who would verify. It's left to the whims and fancies of executive and the State. It will destroy the constitution."

While speaking about the history of caste oppression in India, Sr. Adv. Wilson remarked–

"Today it is caste, earlier it was Jaati and Varna...I don't want to quote Eklavya from Mahabharata. I don't want to mention how a President of India was turned out from temple, even first lady couldn't enter. Untouchability still is lingering in our society even though Art 17 abolishes it. What is the reason for reservation? It is injustice for years. That's why reservation was given. Substantive equality, not formal equality was given. We have to see structural barriers, handicaps, these people were kept from main streets...Equality will be robbed away if 15(6) is implemented."

The hearing will continue tomorrow

Also Read : EWS Quota Arbitrary As It Excludes Poor On The Ground Of Caste; Only Benefits The Privileged : Ravi Verma Kumar To Supreme Court [Day 2]