Examination Of Witnesses In The Absence Of Accused Is A Curable Irregularity: SC [Read Judgment] 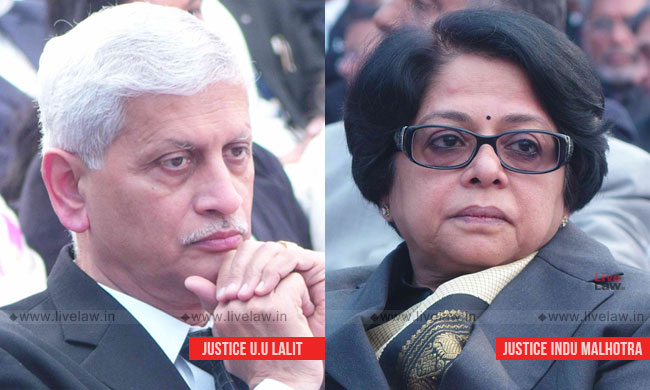 Absence of the accused while taking evidence of prosecution witnesses, by itself, would not vitiate the trial, unless great prejudice has caused to the accused, the Supreme Court has held, while upholding a High Court judgment which ordered fresh trial in a murder case. The bench comprising of Justice Uday Umesh Lalit and Justice Indu Malhotra was considering an appeal against High...

Absence of the accused while taking evidence of prosecution witnesses, by itself, would not vitiate the trial, unless great prejudice has caused to the accused, the Supreme Court has held, while upholding a High Court judgment which ordered fresh trial in a murder case.

The bench comprising of Justice Uday Umesh Lalit and Justice Indu Malhotra was considering an appeal against High court judgment which ordered fresh trial/de-novo by directing the trial court to lawfully re-record statements of the witnesses whose evidence was recorded in the first round without ensuring presence of the accused in the court.
[Read the case background here]
On behalf of the accused, Senior Advocate Sanjay Hegde argued that the right of an accused to watch the prosecution witnesses deposing before a Court is a valuable right and infringement of such a right is gravely prejudicial. The court agreed with this submission and observed that the right is a valuable one and there was an infringement in the present case. But it proceeded to consider these questions:

What is material to consider is the effect of such infringement? Would it vitiate the trial or such an infringement is a curable one?

"It is not the direction of the High Court to read the entire evidence on the earlier occasion as evidence in the de novo trial. The direction is to re-examine those witnesses who were not examined in the presence of the appellants. The direction now ensures the presence of the appellants in the Court, so that they have every opportunity to watch the witnesses deposing in the trial and cross-examine said witnesses. Since these basic requirements would be scrupulously observed and complied with, there is no prejudice at all."

Taking note of the powers of the Appellate Court provided in the Code, the bench said:

"If the power can go to the extent of ordering a complete re-trial, the exercise of power to a lesser extent namely ordering de novo examination of twelve witnesses with further directions as the High Court has imposed in the present matter, was certainly within the powers of the High Court. There is, thus, no infraction or jurisdictional error on the part of the High Court"

Upholding the High Court judgment, and allowing the Trial Court to proceed with re-trial, the bench observed:

"Four persons of a family were done to death. It is certainly in the societal interest that the guilty must be punished and at the same time the procedural requirements which ensure fairness in trial must be adhered to. If there was an infraction, which otherwise does not vitiate the trial by itself, the attempt must be to remedy the situation to the extent possible, so that the interests of the accused as well as societal interest are adequately safeguarded. The very same witnesses were directed to be de novo examined which would ensure that the interest of the prosecution is subserved and at the same time the accused will have every right and opportunity to watch the witnesses deposing against them, watch their demeanor and instruct their counsel properly so that said witnesses can be effectively cross-examined. In the process, the interest of the accused would also stand protected. On the other hand, if we were to accept the submission that the proceedings stood vitiated and, therefore, the High Court was powerless to order de novo examination of the concerned witnesses, it would result in great miscarriage of justice. The persons who are accused of committing four murders would not effectively be tried. The evidence against them would not be read for a technical infraction resulting in great miscarriage."