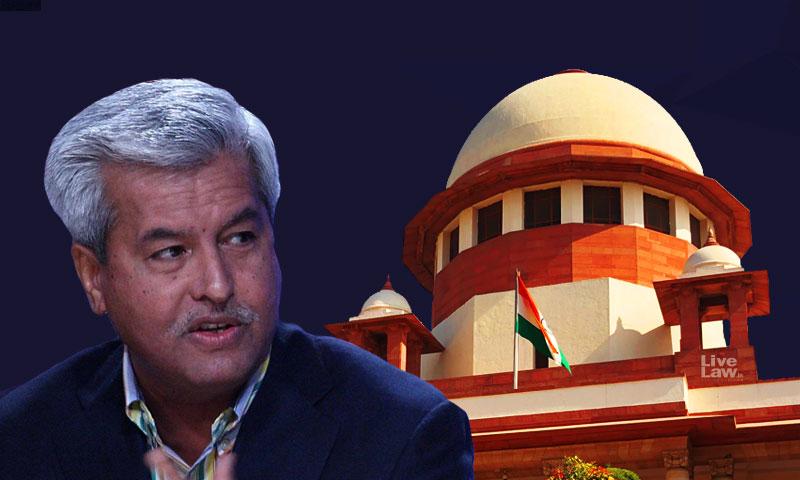 Challenging the order dated November 13, 2020, which retrospectively amended the tenure of the present Director of Enforcement Directorate, Sanjay Kumar Mishra, Senior Advocate Dushyant Dave in a plea filed by Common Cause told Supreme Court that power had to be construed in a reasonable and not in an unreasonable manner and that the extension was a mockery of the Top Court's judgement...

Challenging the order dated November 13, 2020, which retrospectively amended the tenure of the present Director of Enforcement Directorate, Sanjay Kumar Mishra, Senior Advocate Dushyant Dave in a plea filed by Common Cause told Supreme Court that power had to be construed in a reasonable and not in an unreasonable manner and that the extension was a mockery of the Top Court's judgement in Prakash Singh's case.

"Since he was retiring in May of 2020, this exercise was an unreasonable exercise of power. Power has to be construed in a reasonable manner & not in an unreasonable manner. Govt has to think about Rule 56 & govt can't be oblivious.These are fundamental rules. It would play havoc. In democracy, every political govt has chosen officers & they would be granted extension as govt likes & govt would not permit this.", submitted Senior Advocate Dushyant Dave.

The submissions were made before the division bench of Justice L Nageswara Rao and Justice BR Gavai.

Senior Counsel Dave commenced his arguments by putting forth the question of law involved in the present plea and the background of the case.

"This matter has a very important question of public law. The question is, officer of the ED which the Court considers one of the most important posts, whether a person can be appointed beyond the period of superannuation? The person here superannuates, but as commanded by Court in Vineet Narain's case, he continues. The Govt modifies the order dated 2019 & extends the period from 2 years to 3 years. Despite this, the officer who retired in May 2020 is re-appointed till 2021," added Senior Advocate Dave.

Terming the modified order as abuse of executive power and malice in law and laying down the purpose behind the Rules, Senior Counsel put forth questions such as,

Contending that Mishra was re appointed beyond the age of 60 years and that his term wasn't extended, Senior Counsel submitted that, "Total period including extension does not exceed 2 years. Law officers are waiting. If the government will exercise in this fashion, there would be havoc in services. Officers have legitimate expectations."

Relying on the relevant paras of the Top Court's judgement in Vineet Narain & Ors v Union of India & Ors and Section 25 of the Central Vigilance Commission Act, 2003, Senior Counsel argued before the Top Court that like the Director CBI, there is minimum tenure of 2 years regardless of superannuation. And that first appointment is possible, but not the extension.

"The scheme of CVC in light of Vineet Narain's case emerges is the tenure of 2 years irrespective of superannuation can be appointed, however the govt cannot extend the period as per its wish," Senior Counsel contended.

Highlighting on the zone for consideration for appointment of Director of ED, Senior Counsel argued that,

"Even for CVC, when you appoint the Director of ED u/s 25, the zone of consideration is important. You form a panel & from the panel you select the most worthy person. Extension defeats this process. It's only the 1st appointment which can be of 2 years, irrespective of superannuation. One month's extension was understandable in case the government could not convene a meeting but a 1 year period is unreasonable."

Senior Counsel Dushyant Dave also argued that the Union was bound by the directives laid down in Prakash Singh & Ors v Union of India & Ors and that the government could just not go on in giving extensions. In order to further substantiate his contention, Senior Counsel while referring to the Top Court's judgment in Ram Jawaya Kapur submitted that uncannalised and unbridled powers of the executive demoralised the officers.

"Unbridled powers of the executive demoralises the officers. If you are the govt's favourite, you would be appointed & in case you are an independent officer, you won't be appointed," Senior Counsel submitted.

"One month's extension was understandable in case the govt could not convene a meeting but a 1 year period is unreasonable. Your lordship does not want any favouritism. Union is bound by these directives & are parties to. The law laid down in Prakash Singh is pari materia with regards to CBI & ED. You can't just go giving extensions," Senior Counsel also added.

Mishra was appointed as the Director of ED vide order dated November 19, 2018, and his mandatory two years tenure prescribed under the CVC Act came to an end on November 18, last year. His tenure had however been extended for one more year by the impugned Office Order dated November 13, whereby the 2018 amendment Order for appointment had been amended such that the period of 'two years' written in that order has been modified to a period of 'three years'. Thus, in effect, Mishra has been given an additional one year of service as Director, Enforcement Directorate.

This extension was challenged in a writ petition filed by the NGO 'Common Cause'.

The arguments of the Solicitor General of India Tushar Mehta defending the appointment order is underway at the time of publication. Live Updates available here.