'Delhi Can Ill-Afford Another Riots; Role Of Facebook Must Be Looked Into': Supreme Court Upholds Delhi Assembly Summons 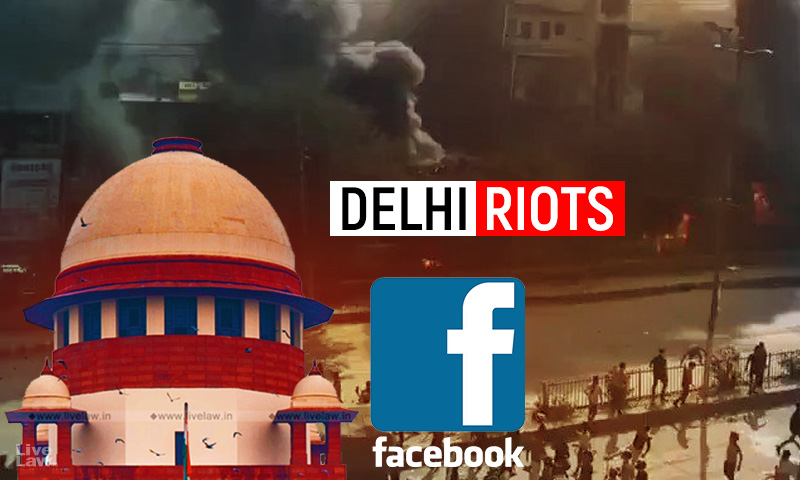 The Supreme Court on Thursday refused to quash the summons issued to Facebook India Managing Director Ajit Mohan by the Peace and Harmony committee of the Delhi Assembly Committee seeking his appearance in an enquiry related to Delhi Riots."The capital of the country can ill-afford any repetition of the occurrence and thus, the role of Facebook in this context must be looked into...

The Supreme Court on Thursday refused to quash the summons issued to Facebook India Managing Director Ajit Mohan by the Peace and Harmony committee of the Delhi Assembly Committee seeking his appearance in an enquiry related to Delhi Riots.

"The capital of the country can ill-afford any repetition of the occurrence and thus, the role of Facebook in this context must be looked into by the powers that be. It is in this background that the Assembly sought to constitute a peace and harmony committee – whether it has the legislative competence or not is an aspect we will deal with it under the relevant head. The Assembly being a local legislative and governance body, it cannot be said that their concerns were misconceived or illegitimate," the judgment stated.

The Court held that the challenge of Facebook Head was "premature" and "preemptive" as  nothing much has happened really except being asked to appear. There is no precedent for interfering with an action of assembly at a threshold stage.

The Court also held that legislative function is  only one of the functions of the assembly. Investigation of complicated social problems are also under its domain.

Ajit Mohan had approached the Supreme Court under Article 32 of the Constitution challenging the summons issued by the Peace and Harmony committee of the Delhi Assembly, headed by Raghav Chadha MLA, to probe the role of fake social media posts in creating communal riots in North East Delhi in February 2020.

The Court rejected the argument that the Delhi Assembly has no legislative competence to enquire into the matter of Delhi riots. The committee has right to seek information on any matter related to peace and harmony without encroaching in any subject of  the Union under the 7th schedule.  Because of the nature of the riots, the Delhi Assembly, without transgressing into any field of the Union under 7 Schedule can look into the issue. Larger concepts of "peace and harmony" go beyond the concept of "law and order".

However, the bench took exception to certain statements made by the Committee in its press conference against Facebook. It underscored that the Committee has no power to prosecute. The committee cannot don the role of a prosecuting agency and direct filing of supplementary chargesheet. Assembly does not have power on law & order or social media intermediaries.

Therefore, the Court held that any representative of the petitioner can deny answering any question by the committee if its falls within the prohibited domains.

The judgment authored by Justice Kaul stated that the Court has not dealt with the issue of codification of legislative privileges.

"Regarding codification of privileges, it is a serious issue, we did not exercise powers under 142 as we were asked to", the judgment said.

The Supreme Court observed that Facebook's role is not so "innocuous" and is more "active" while dealing with third party information.

"It is too late in the day for companies like Facebook to deny that they use algorithms (which are sequences of instructions) with some human intervention to personalise content and news to target users. The algorithms select the content based on several factors including social connections, location, and past online activity of the user".

The Court noted that such algorithms are often "far from objective with biases capable of getting replicated and reinforced". Serious questions have been raised about whether there is a faulty architecture of such intermediary platforms and whether the kind of free,liberal debate which they sought to encourage has itself become a casualty, defeating the very objective of providing that platform.

"The role played by Facebook is, thus, more active and not as innocuous as is often presented when dealing with third party content", the Court said

The judgment authored by Justice Kaul referred to the studies indicating the role of Facebook posts in fuelling genocide in Myanmar, violence in Sri Lanka etc.
"Internationally, Facebook has had to recognise its role in failing to prevent division and incitement of offline violence in the context of the stated ethnic cleansing in Myanmar where a crescendo of misinformation and posts, some how missed by Facebook employees, helped fuel the violence. The platform similarly apologised for its lack of serious response to evident signs of abuse of the platform in Sri Lanka, which again is stated to have stoked widespread violence in 2018 in the country and had to acknowledge its need to be regulated though the exact method is still unclear and a prerogative of law making authority".

The judgment also referred to reports suggesting role of social media misinformation in influencing results of 2016 US Presidential Elections and Brexit referendum.

"...while social media, on the one hand, is enhancing equal and open dialogue between citizens and policy makers; on the other hand, it has become a tool in the hands of various interest groups who have recognised its disruptive potential. This results in a paradoxical outcome where extremist views are peddled into the mainstream, thereby spreading misinformation", the judgment stated.

"Election and voting processes, the very foundation of a democratic government, stand threatened by social media manipulation. This has given rise to significant debates about the increasing concentration of power in platforms like Facebook, more so as they are said to employ business models that are privacy-intrusive and attention soliciting"

In this context, the judgment referred to the concept of "Post-Truth", and the trend of "objective truth fading away" in the wake of digital media misinformation.

India's Unity in Diversity cannot be allowed to disrupted

"The sheer population of our country makes it an important destination for Facebook. We are possibly more diverse than the whole of Europe in local culture, food, clothing, language, religion, traditions and yet have a history of what has now commonly been called 'unity in diversity'. This cannot be disrupted at any cost or under any professed freedom by a giant like Facebook claiming ignorance or lack of any pivotal role".

The Court underscored that the unprecedented degree of influence wielded by social media necessitated the need for safeguards and caution in consonance with democratic values.

There is a need to draw a line between tackling hate-speech and fake news on the one hand and suppressing legitimate speech which may make those in power uncomfortable, on the other. This delicate balance has thus far only been maintained by the intermediaries by being value-neutral.

"Platforms and intermediaries must subserve the principal objective as a valuable tool for public good upholding democratic values", the Court reminded.

Facebook cannot be excused from appearing before Delhi Assembly panel

The Court refused to accept the argument of Senior Advocate Harish Salve that Facebook cannot be drawn into a political divide.

"Facebook is a platform where such political differences are reflected. They cannot wash their hands off the issue as this is their very business. As noticed earlier, their role is not as innocuous as they are seeking to contend", the Court said.

The Court also upheld the competence of the Delhi assembly to enquire into the circumstances leading to the Delhi riots. The argument that assembly only can have legislative functions was rejected.

"We cannot say that informed deliberation inter alia on the best measures through which online mass hate and violence in their geographical jurisdiction can be addressed would not be within the Committee's area of competence as it would undermine the very purpose of a vital democratic polity", the Court said.

"The unfortunate communal riots between 24th and 29th February,2020 in various parts of Delhi, led to the death of 53 persons, caused significant damage to public and private property, disruptions to schools,transport, water supply, medical and other civic amenities. The complexity of communal tensions and their wide-ranging ramifications is a matter affecting citizens of Delhi and it cannot be said that the Government of NCT of Delhi cannot look into the causal factors in order to formulate appropriate remedial measures. Appropriate recommendations made by the State Government in this regard could be of significance in the collaborative effort between the Centre and the State to deal with governance issues. It is in that context that this Court had recognised that certain local interests are best addressed by the elected representatives of the concerned State"

On 24th February, the Supreme Court had reserved its judgment in the matter. During the hearing, Senior Advocate Harish Salve, appearing on behalf of Ajit Mohan, had argued that it was not the "core function" of the Delhi Legislative to constitute a Committee examining issue of peace and harmony when there is no legislative power rested with the Assembly to deal with the issue.

Solicitor-General Tushar Mehta, representing Union of India, had informed the Supreme Court that the problem emerging from social mediums like Facebook and Twitter was an "uncontrollable global problem" which could not be legislated by State Assemblies. He further submitted that such an issue of global importance had to be examined on a national level by a national body, namely the Parliament.


Senior Advocates Dr. Rajeev Dhavan and Dr. Abhishek Manu Singhvi, appearing for the Delhi Legislative Assembly, had argued that an Article 32 petition could not be invoked as there had been no violation of fundamental rights, and that as per the Kalpana Mehta judgement, Parliamentary Committees harboured an inquisitorial power.


Senior Advocate Arvind Datar had also made submissions on behalf of Facebook, stating that the Committee could not deal with public order situation and it could further not compel private individuals to appear before them.