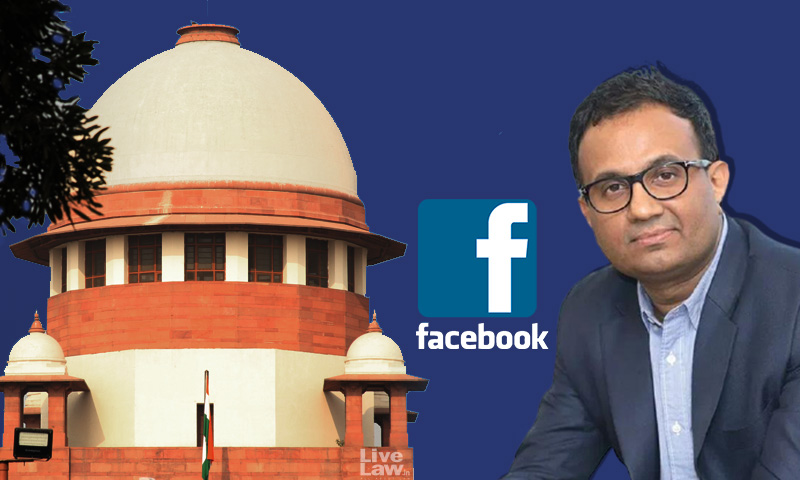 The Supreme Court on Thursday adjourned to January the plea filed by Vice-President of Facebook India Ajit Mohan challenging the summons issued to him by Delhi Assembly's Committe on Peace and Harmony in connection with the February 2020 Delhi Riots. A Bench of Justices SK Kaul, Dinesh Maheshwari and Hrishikesh Roy presided over the matter and issued notice in an...

The Supreme Court on Thursday adjourned to January the plea filed by Vice-President of Facebook India Ajit Mohan challenging the summons issued to him by Delhi Assembly's Committe on Peace and Harmony in connection with the February 2020 Delhi Riots.

A Bench of Justices SK Kaul, Dinesh Maheshwari and Hrishikesh Roy presided over the matter and issued notice in an Intervention Application filed on behalf of the Committee which was represented by Senior Advocate Rajeev Dhavan.

The Petitioner has been given two weeks to file a Reply to the Application, while the Applicant has been directed to file a written synopsis.

In today's hearing, Dhavan submitted to the Court that the issue revolved around the powers of the Committee.

Senior Advocate Harish Salve, appearing on behalf of Mohan, concurred and stated that he had a lot to say about the Committee's stand that it had separate powers as a jurisdictional entity. He informed the Bench that the Application could be allowed as these were all legal issues ultimately.

Dhavan, along with Senior Advocate Dr. AM Singhvi, submitted that if the Petitioner felt that it was an issue of law, then the proceedings could continue, or otherwise the earliest date could be given.

Salve then informed the Bench that a date for final hearing could be fixed and that he would take his instructions.

Accordingly, the matter is now listed for the third week of January, on a regular day, except for 19th January, 2021.

In September, Facebook India Vice President Ajit Mohan had moved the Supreme Court challenging the summons issued by the Delhi Assembly's "Peace and Harmony" Committee, which is looking into Facebook's alleged failure to track down hate-speech. Mohan had stated that this issue fell within the exclusive domain of the Union of India.

The Assembly Panel on Peace and Harmony is looking into complaints on the "role or complicity of Facebook officials in the Delhi riots" that took place in February 2020.

On 23rd September, a Bench comprising of Justices SK Kaul, Aniruddha Bose and Krishna Murari issued the notice after hearing Senior Advocates Harish Salve (for Mohan), Mukul Rohatgi (for Facebook) Dr. AM Singvhi (for the Chairman of the panel, Raghav Chadha).

The Bench also recorded the submission of Singhvi that the meeting scheduled for that had been deferred in view of the hearing and that there would be no further proceedings on the notice till the matter is finally disposed.

In a Counter-Affidavit filed by the Delhi Legislative Assembly, the Supreme Court was informed that Ajit Mohan had merely been summoned by its "Peace and Harmony Committee" to give his expert deposition in its inquiry against the Company's alleged failure to track down hate-speech.

It was emphasized that its proceedings were not criminal or judicial in nature, and neither was Mr. Mohan an "accused" and therefore, he could not assert the right to remain silent.

However, during the hearing on 15th October, Senior Advocate Harish Salve had asserted before the Court that Mohan would not appear before the Committee. Senior Advocate Dr. AM Singhvi, on the other hand, had submitted that no coercive action had been intended against Mohan in the fist place and the scope of the Panel was recommendatory in nature.