'This Is Forest Land, Not Ordinary Land' : Supreme Court Refuses To Halt Demolition Of Over 10,000 Settlements In Faridabad Khori Gaon 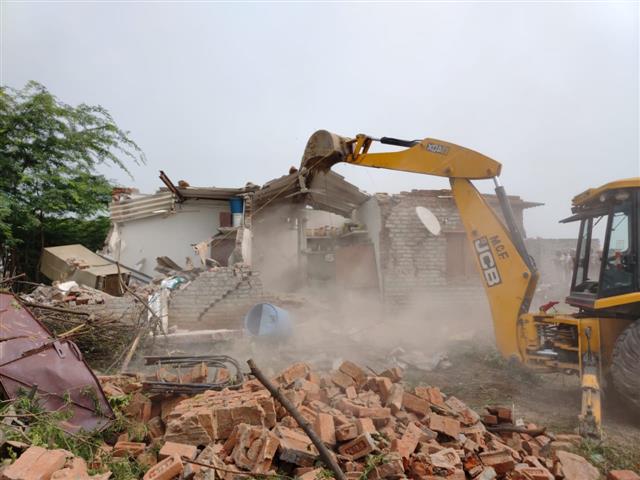 "No indulgence is required to be shown to the Petitioners", said the Supreme Court on Thursday in a Public Interest Litigation (PIL) seeking a stay on the demolition of 10,000 houses that has been planned by the Municipal Corporation of Faridabad at Khori Gaon in Faridabad, Haryana. The removal of encroachments on the forest land within 6 weeks had been directed by the Supreme Court...

"No indulgence is required to be shown to the Petitioners", said the Supreme Court on Thursday in a Public Interest Litigation (PIL) seeking a stay on the demolition of 10,000 houses that has been planned by the Municipal Corporation of Faridabad at Khori Gaon in Faridabad, Haryana. The removal of encroachments on the forest land within 6 weeks had been directed by the Supreme Court on 7th June.

A Bench of Justices AM Khanwilkar and Dinesh Maheshwari heard the matter, and recorded that the Petitioners would be permitted to produce documents before the Corporation and that they had had enough opportunity to vacate the forest land after February 2020.

"Petitioners were obligated to provide the documents to be under the rehabilitation scheme which they have failed to do. We have recorded the submission that the clearance of unlawful encroachment on forest land will be carried out as per due process of law", ordered the Supreme Court.

Further, the Court noted that the Corporation and the State of Haryana could proceed with the demolition on the basis of the commitment that had been givento the Court on June 7, 2021.

The matter is now to be listed with the other SLP on July 27. The bench was hearing the PIL Ashok Kumar and others vs State of Haryana.

On June 7, the same bench had directed the removal of all encroachments on forest land within 6 weeks at Khori Gaon in Faridabad, Haryana, observing that no compromise can be made with forest lands.

In today's hearing, Advocate Aparna Bhat, appearing for the Petitioners, submitted to the Court that the issue of eligibility had not been taken up by the State and en masse demolitions were taking place.

"There has to be some identification process that the State must initiate. If they begin the exercise in some time-bound manner, we will be grateful. Our right to rehabilitation will be protected", submitted to Bhat.

The arguments were rejected by the Court who reiterated that enough time had been given to the Petitioners to leave the land.

"We gave orders, you have been there at your own risk. This is forest land, not any ordinary land. Please read our Order dated April 5, 2021. When you want the scheme to be extended, you need to provide the additional documents and details. One year was already given to you", said the Court.

In response to Bhat's submissions that the people residing on the land had nowhere to go and were migrant labourers as well as children, the Court remarked that it was the State which had to deal with rehabilitation and that the Court was solely concerned with forest land.

However, the Court noted that even if demolition took place, the Petitioners could produce the documents for identification and rehabilitation before the Corporation.

Further, it was observed, "Enough indulgence was shown last year. Had you submitted your documents, by now rehabilitation would have been done. All your clients were ill-advised by someone else. We have heard this argument again and again. The matter has been going on for a while", said the Court.

The instant plea has urged the Court to 'Ex debito Justitia' consider that the inhabitants of Khori Gaon, Faridabad be not evicted or their houses be not demolished till such time the threat of pandemic continues, in view of the current pandemic and the guidelines issued by World Health Organization.

The plea filed by Advocate Tanima Kishore has sought directions to the State of Haryana and Municipal Corporation, Faridabad to collect all the required information from the persons who are in occupation at Khori Gaon, Faridabad to facilitate their right to resettlement and rehabilitation before their eviction.

Further directions have been sought to the State and Municipal Corporation to place before Supreme Court, the policy or legal framework with regard to resettlement and rehabilitation in consonance with Article 21 of the Constitution and law prevailing in Delhi, Maharashtra and other States

The petitioners have urged the Court to direct the respondents to provide temporary shelter to evicted residents of Khori Gaon in consonance with Article 21 of the constitution and to fulfil the legal requirement of resettlement/rehabilitation.

"All around the world, people are being encouraged to stay indoors as a house is the most effective frontline defence against covid-19 pandemic, therefore, evicting the slum dwellers at Khori Goan during pandemic would make them vulnerable to the disease", the plea has stated.

While highlighting that Right to housing has been recognised by Supreme Court as a part and parcel of the fundamental Right to Life in several judgements, the petitioners have stated that the principle that slum dwellers occupying government land which also includes forest land are entitled to rehabilitation is also recognised by the State of Haryana themselves via Haryana Shehri Vikas Pradhikaran Rehabilitation Policy, 2010.

On 7th June, while hearing a separate plea filed by 10,000 families living in Khori Gaon who had challenged the Haryana Shehri Vikas Pradhikaran Rehabilitation Policy to the extent that it limited the cut-off for rehabilitation to 2003, the Supreme Court directed for the removal of all encroachments within 6 weeks and also sought for a report of compliance under the signature of Chief Secretary and Secretary of Haryana Forest Department to be provided.

"After the certificates are provided, we will determine our own factual position. We make it clear that MCF will proceed as stated in February 2020 order and State will give necessary logistical support to enable corporation to fully evict the occupants on forest land and clear the encroachments", directed the Court.

The Supreme Court further directed the DCP of Faridabad to provide police protection to the corporation officials. It did, however, note that the relief claimed by the Petitioners could be considered de hors the compliance given in the earlier February 2020 order.

The Court also noted – "We make it clear that if the certificate does not portray it truthfully that the forest land has been cleared, there will be contempt action. We have asked the Secretary of Forest Department to reply now. Next, the Chief Secretary of Haryana will be responsible for this".