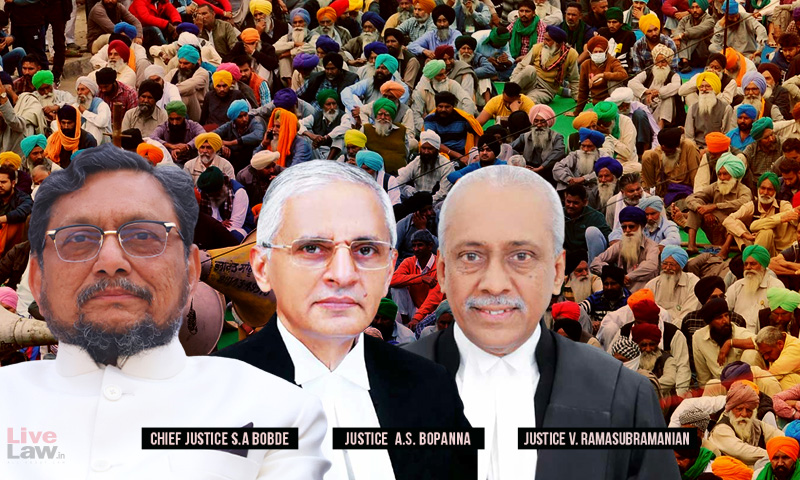 The Supreme Court will pronounce Orders on stay on operation of Farm Laws tomorrow.Earlier today, the Bench hinted that it will stay the implementation of the three farm laws, in order to prevent violence and breaking of laws. "You tell us if you will put on hold the implementation of the laws. Otherwise we will do it. What is the problem in keeping it in abeyance?", the CJI asked...

The Supreme Court will pronounce Orders on stay on operation of Farm Laws tomorrow.

Earlier today, the Bench hinted that it will stay the implementation of the three farm laws, in order to prevent violence and breaking of laws.

It observed that a Committee needs to be appointed to resolve the deadlock between the Government which wants a clause by clause consideration of the legislations and the farmers, who want that the laws to be completely repealed.

"Staying the implementation of laws and staying the law are different. We can always stay executive action under a law. Who will be responsible if any bloodshed happens?" said CJI SA Bobde while hearing a batch of petitions challenging the Farm Laws/ seeking removal of protesting farmers from Delhi borders.

Solicitor General Tushar Mehta, who opposed the stay order during the hearing, has sought a day's time to suggest names for the Committee.

Senior Advocate Dushyant Dave, appearing for a farmers group, suggested the name of former CJI RM Lodha as a member of the Committee.

Strong remarks by the CJI

The CJI did not mince words in expressing disappointment at the Central Government.

"We want an amicable solution for the problem. That is why we asked you last time, why don't you keep the laws on hold. But you are keeping asking on time. If you have some sense of responsibility, and if you say you will withhold the implementation of laws, we will form committee to decide. We don't see why there should be an insistence that the laws must be implemented at any cost.

We asked you this last occasion. But you haven't replied. And the matter is getting worse. People are committing suicide. People are suffering in the cold", the CJI asked the Attorney General.

SG submitted that the government did its best to hold talks with the farmers and urged the court to remove the impression that nothing was done by the Centre.

Power of Court to stay implementation of a legislation

The proposal to stay the law was opposed by the Attorney General for India KK Venugopal, who pointed out that that there are Supreme Court precedents saying that Courts cannot stay legislation.

The AG referred to State of UP v. Hirendra Pal Singh, (2011) 5 SCC 305, where it was held that in cases where validity of statutory provision is under challenge, the Courts should exercise self-restrain in passing interim orders.

"Court cannot stay a legislation unless the court finds that (1) law is passed without legislative competence (2) law violates fundamental rights (3) law violates other provisions of constitution."

The AG said that he has not seen any argument in any of the petitions raising the above three points.

The CJI however referred to a three-judge bench order that stayed the implementation of 2018 Maharashtra law granting reservation to Marathas in education and job, while hearing a batch of pleas challenging the validity of the law.

The CJI clarified that the Court is not encouraging preventing of laws. "In fact, we propose to pass the order to prevent violence and breaking of laws," he said.

"We Are Extremely Disappointed At The Way Govt. Handling The Farmers Protests And Farm Laws",Chief Justice Bobde

The AG also pointed out that since the Act coming into force in June 2020, by way of an Ordinance, more than 2000 farmers entered into contract for selling products in mandis.

"If the Court stops the implementation, they will lose heavily. If your lordships stay the law, it will cause tremendous loss to these 2000 farmers. Staying implementation of law is same as staying. Court cannot do indirectly what it cannot do directly," the AG said.

No stay on farmers' protests

The Top Court however refused to pass an order restricting the farmers protests. The CJI said, "Court will not pass an order that citizens should not protest… We told last time also Court is not going to decide issues like who should enter Delhi etc. It is for the police to decide."

"We are sorry to say that you, as the Union of India, are not able to solve the problem. You have made a law without enough consultation resulting in a strike. So you have to resolve the strike."

The Court made it clear that its previous order that the farmers can continue protests in a peaceful manner shall continue with the exception that the Court will think of changing the site of protest, (given the extreme weather conditions in Delhi).

"The most serious concern occupying the court is the possible loss of life and property. This is the most important component of our view.

Passions are running high. But you must tell them to go back. There is cold. There is COVID. It is not necessary that they (old people and women) should be there at protests," the CJI said asking Advocate HS Phoolka to persuade the old people and women among the protesters to return to their villages.

Phoolka replied that these people came from villages on their own. They were hurt by statements made by Ministers that they were 'naxals', 'khalistanis' etc, as most Punjab families have at least one member serving the Army.

At this point, Senior Advocate Colin Gonsalves assured the Court that he, Dushyant Dave and HS Phoolka will go to the farmers union today with the Court's views and will come back with their suggestions.