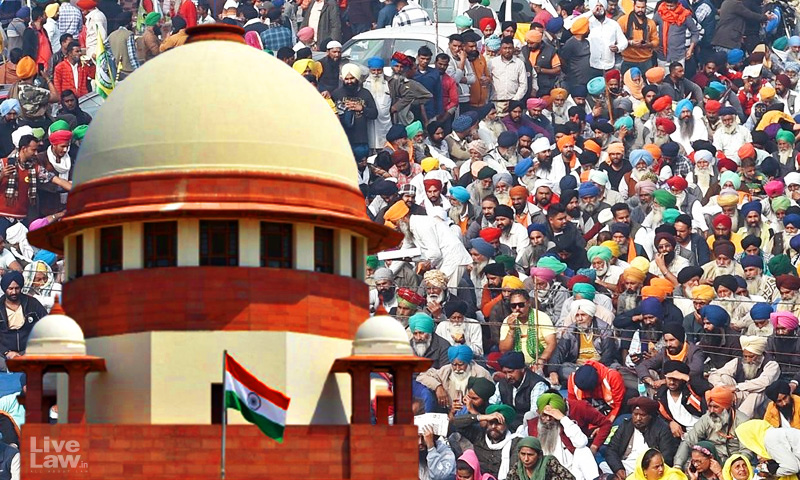 In the counter-affidavit filed in the Supreme Court in the case concerning farmers protests, the Central Government has claimed that farmers are happy with the contentious farm laws which have sparked protests.The Centre has told the Court that its Preliminary Affidavit is for the purpose of "dispelling the erroneous notion that the protestors have peddled" regarding the absence of...

In the counter-affidavit filed in the Supreme Court in the case concerning farmers protests, the Central Government has claimed that farmers are happy with the contentious farm laws which have sparked protests.

The Centre has told the Court that its Preliminary Affidavit is for the purpose of "dispelling the erroneous notion that the protestors have peddled" regarding the absence of consultative process on behalf of the Central Government and Parliament before passing of the three contentious farm laws.

The Affidavit, filed in the matter pertaining to the petitions challenging the farm laws as well as seeking for the removal of protesting farmers situated at the borders of Delhi, states that an impression was created in today's hearing that the Acts had been passed without any consultative process.

The Centre has attempted to dispel the aforementioned impression and submits that the Court must consider the "serious, sincere and constructive efforts made by the Central Government to engage with the limited number of protesting farmers who are opposing the Act".

The Affidavit goes on to state that the protest is limited to only one section of the country, and that the majority of the farmers "are not only happy with the legislations but are finding these legislations to be progressive and in their interest as substantially they are having one more option than the existing option". Therefore, it has been requested to not treat the agitation as a reflection on the validity or the efficacy of the laws.

It has been highlighted in the Affidavit that protestors have fully and partially blocked seven and four roads respectively, and that with the impending Republic Day ceremony, "any disruption or obstruction in the said functions would not only be against the law and order, public order, public interest but would also be a huge embarrassment for the nation".

The Affidavit then lays down the steps taken by the Government of India prior to legislating the laws.

"…Government of India has been thus, actively and intensively engaging with the States for about two decades to achieve the aforesaid objectives of reforms…"

(a) farm laws are not hurriedly made but result of 2 decades of deliberations.

The Centre said that farmers unions are not coming for talks with open mind. It said 'Representatives of Farmers' Unions came with pre-occupied mind & instead of discussing the dispute rationally they raised placards with "YES or NO" to repeal the stated three Farm Reform Laws'.

It further said there is "a deliberate wrong perception created systematically by non-farmer elements present at the protest site and using media / social media" to create misgivings in the mind of farmers about the farm laws.

It has further been submitted that "as a responsible Government, it has taken all conceivable steps" to have an effective dialogue to remove any misgivings and to also ensure that specific grievances of agitating farmers are "discussed and sorted out so far as possible".

The Affidavit further contends that the "apprehensions, misgivings and misconceptions" of some of the farmers and their Unions have created by "some vested interest people, which have moved from Punjab to in and around Delhi", and that the "Union Government is committed for the socio-economic empowerment of the farmers through better market and price for their produce".

It concludes on the note that the laws "were not enacted overnight but were the result of suggestions by various experts and recommendations by varied Committees/Groups over the last 20 years".

Earlier today, a Bench headed by CJI SA Bobde hinted that it will stay the implementation of the three farm laws, in order to prevent violence and breaking of laws.

It observed that a Committee needs to be appointed to resolve the deadlock between the Government which wants a clause by clause consideration of the legislations and the farmers, who want that the laws to be completely repealed.

"Staying the implementation of laws and staying the law are different. We can always stay executive action under a law. Who will be responsible if any bloodshed happens?" said CJI SA Bobde while hearing a batch of petitions challenging the Farm Laws/ seeking removal of protesting farmers from Delhi borders.

Solicitor General Tushar Mehta, who opposed the stay order during the hearing, has sought a day's time to suggest names for the Committee.

Senior Advocate Dushyant Dave, appearing for a farmers group, suggested the name of former CJI RM Lodha as a member of the Committee.

Orders in the matter will be pronounced tomorrow.