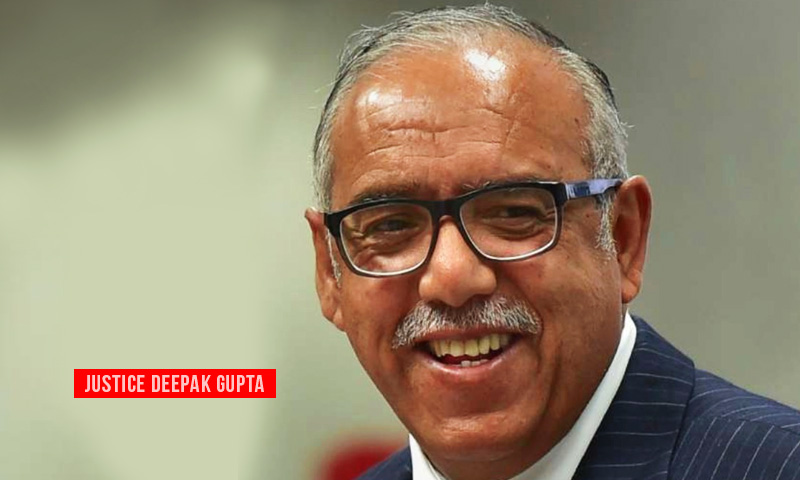 "I do feel that the court should have been careful to tread in as this is a dangerous territory", commented former Supreme Court judge, Justice Deepak Gupta, recently.Appearing on India Today channel, the retired judge was addressing the question whether the Supreme Court's recent interim order staying the implementation of the three farm laws was, as the critics are calling it, an advent...

"I do feel that the court should have been careful to tread in as this is a dangerous territory", commented former Supreme Court judge, Justice Deepak Gupta, recently.

Appearing on India Today channel, the retired judge was addressing the question whether the Supreme Court's recent interim order staying the implementation of the three farm laws was, as the critics are calling it, an advent into unchartered territory.
"As to whether the Supreme Court could pass such an order, normally when the constitutionality of a law challenged, the law is not normally stayed. Sometimes, there is a partial stay to the effect that though the law shall continue to operate, the final thing is not carried out till the court decides the matter. Here, the court decided to intervene. I'm not saying that the court is powerless; it has wide powers. Under article 142, it can lay down the law for the country. It can also act where larger public interest is involved. The present instance seems to be one of these cases", explained the former judge.
Justice Gupta continued to opine that when is granted, the court is expected to give reasons-

"Here, the order does not give reasons except that it was issued with the intention of making the farmers and the government come to the dialogue table. A stay cannot be granted for this purpose. It can be granted only if prima facie, the law is illegal. If this precedent is followed by the various high courts, it will result in a situation where various several legislations passed by the government will be stayed without adequate reasons. The Supreme Court should have given more reasons for staying or should not have stayed the laws at all"

On the appointment of the four-member committee by the Supreme Court, each of whom in the past has expressed views in favour of the laws and whether now they can be trusted to assuage the concerns of the farmers or accommodate the same
In suspending the operation of the laws, the CJI SA Bobde-led bench also mentioned the names of Agricultural economist Ashok Gulati, Bhupinder Singh Mann, President BKU and All India Coordination Committee, Pramod Kumar Joshi( Director South Asia international Food Policy), Anil Ghanwat (Shethkari Sangathan) to be the members of the Committee, that is expected to resolve the deadlock between Government and protesting farmers.
Shri Bhupinder Singh Mann, who was a former MP of the Rajya Sabha, had in December led a delegation which met the Union Agriculture Minister to demand the implementation of the three laws, with certain amendments.
Dr Pramod Kumar Joshi, recently co-authored an article in the Financial Express which said "any dilution in the farm laws will constrain Indian agriculture to harness emerging global opportunities".
Ashok Gulati has argued in an article written in the Indian Express that the farm laws are in the right direction. He commented that the opposition has been misguided. He said that the laws will "make Indian agriculture globally competitive, and benefit farmers and consumers alike".

S. Bhupinder Singh Mann, Ex MP and National President of BKU and Chairman of All India Kisan Coordination Committee. has recused himself from the 4 member committee constituted by Supreme Court "As a farmer myself and a Union leader, in view of the prevailing sentiments and apprehensions amongst the farm unions and the public in general, I am ready to any position offered or given to me so as to not to compromise the interest of Punjab and farmers of the Country, I am recusing myself from the Committee and I will always stand with my framers and Punjab", he said in a statement.

Justice Gupta stated that it is not just a principle of mediation but the first principle of justice, that justice must not only be done but also be seen to be done.

"Without any consultation with the directly affected parties, these members have come to be appointed. In a country with a population of 135 crores, we could not find one economic-agricultural person who had views in favour of the farmers? Finding neutral persons would not have been difficult to find. The court could have invited the recommendations of the government and the farmers and then could have chosen to draw the members from such a pool. It would have been more balanced then", he expressed his view.

However, he proceeded to state, "But now that the members are the members of a committee appointed by the Supreme Court, I hope and expect that they will leave their personal views behind and decide the issue solely on merits and by not what they have said before and that they will rise to the occasion"
On the claims that the Supreme Court has stepped in only to help the government
"I will not go to the extent of saying that the Supreme Court stepped in only to help the government. That would be putting too much into it. But I do feel that in the last few years, a large number of so-called PILs are filed, which claim to be public interest litigations, but are basically police interest litigations to help the police to do its job. If the police can't do its job, if it cannot maintain law and order, it is not the job of the court to step in. We have petitioners who say that the police is not doing this, so please ask the protester to do this – I would say that this is beyond the Supreme Court's interference, otherwise it would result in the opening of a Pandora's box. There may be some who like the court's interference here, but may not like it in some other cases", expressed the judge.
On the best and judicious way forward

"Not just judicious, but a practical way, speaking as a citizen of the country- The first demand of the farmers was that the laws must guarantee the MSP. The government said that it can't be guaranteed in the Act. I don't understand why one section can't be added that when a private individual or a corporate entity buys from a farmer, it cannot be for a price lesser than the MSP. There is nothing in the Constitution which prevents the government from legislating in such a manner. This would have helped the situation then", asserted the judge.

"Today, the farmers are stuck at one level. We can't expect the laws to be withdrawn or repealed. The farmers should also understand and realise that the MSP can be guaranteed to them by suitably amending the law, even without repealing it...The amendment in Punjab is basically one which guarantees the MSP. If the Centre could take this into consideration, I don't see why it should not", said Justice Gupta.
He signed off with the remark- "I do feel that the Court should have been careful to tread in this matter...this is a dangerous territory..."