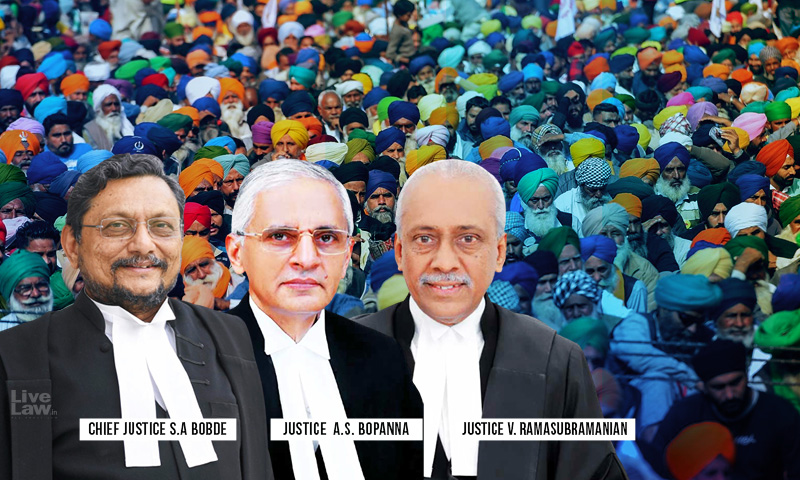 The Supreme Court has issued notice on an application seeking re-constitution of the Committee appointed by the Top Court for the purpose of holding talks between the Central Government and the farmers for a resolution of the protests due to the three contentious farm laws.The Court noted that there is a vacancy in the committee following the resignation of BS Mann. The Bench led by CJI...

The Supreme Court has issued notice on an application seeking re-constitution of the Committee appointed by the Top Court for the purpose of holding talks between the Central Government and the farmers for a resolution of the protests due to the three contentious farm laws.

The Court noted that there is a vacancy in the committee following the resignation of BS Mann.

The Bench led by CJI SA Bobde however expressed dissatisfaction at the manner in which the farmers unions had cast unnecessary aspersions on the Committee members and said that the Supreme Court does not appreciate branding people like this.

How can you play with people's reputation like this? We have serious objections in they being called biased and in saying court was having an interest. You malign people according to majority opinion?," the CJI sternly remarked on Wednesday.

He observed that the Committee members are experts in the field of agriculture and merely because they have expressed opinions in different context doesn't amount to their disqualification.

"Expressing opinions in different context doesn't mean disqualification…Branding people like this, we don't appreciate. Even judges express views during hearing. That doesn't mean they can't decide," the CJI remarked.

The observation resonates with the remarks made by the CJI yesterday, while hearing the suo moto matter on steps to expedite criminal trial.

"Just because a person has expressed a view on the matter, that is not a disqualification to be a member of a Committee…Committee members are not judges. They can change their views," the CJI had orally observed while suggesting names for amicus curiae in the matter.

While hearing an application filed by the Bhartiya Kisan Union Lokshakti and Kisan Mahapanchayat for the Committee's re-constitution, the CJI said,

"The basis of your application is that all four people are disqualified. How do you come to that conclusion? They are brilliant minds in the field of agriculture. They are experts. How do you malign them coz they have expressed some views in the past?
Every judge and lawyer have expressed some views in past and are doing something different now. Does it not happen that people change their opinions after hearing contradictory point of view? Men of integrity do that.
We don't understand this. The Supreme Court appoints a committee and their reputation is torn to shreds!"

The CJI clarified that the Committee has not been given powers to adjudicate and is appointed only to assist the Court.

"Committee was asked to listen to protesters and give us a report. Where is the question of bias in that?," the CJI asked rhetorically.