Group Of 140 Lawyers Writes To CJI Seeking Suo Motu Cognizance Against Suspension of Internet Services in Parts of Delhi-NCR, Amidst Farmers Protests. 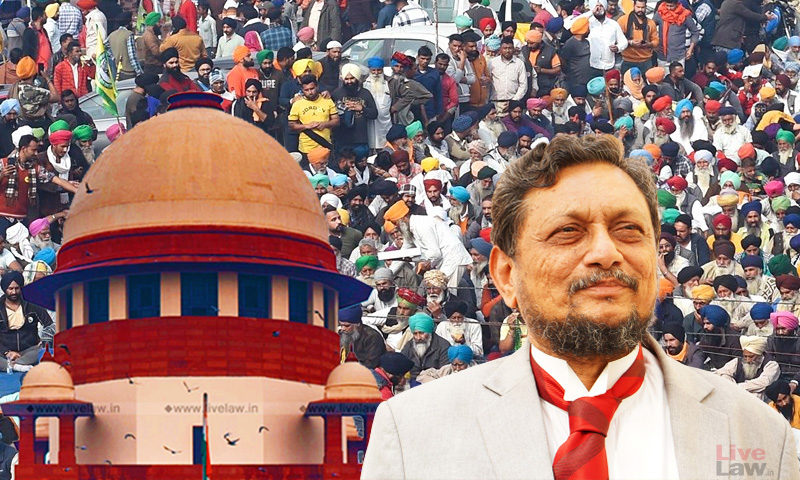 A group of 140 lawyers have written to the Chief Justice of India against suspension of internet services in parts of Delhi-NCR, during the ongoing farmers protests.

After the farmers' Republic Day tractor rally turned violent, the Ministry of Home Affairs ordered temporary suspension of Internet services in several parts of Delhi. This order was extended after violent encounters at Singhu Border on January 29, and internet services at Singhu, Ghazipur and Tikri border areas remains suspended.

As per the Government, it is necessary to suspend Internet services "in the interest of maintaining public safety and averting public emergency".

In the letter petition, the lawyers alleged that the violence was perpetrated by local hoodlums. It is alleged that about 200 men claiming to be local residents barged into the protest site at Singhu Border to vacate the area and pelted stones, damaged properties, and attacked the protestors despite the presence of heavy security of the police.

The lawyers have thus urged the Supreme Court to take suo moto cognizance of the issue and restrain the Central Government from imposing further Internet shutdowns at the protest sites and adjoining areas.

"As internet services remain suspended in and around the protest venues and its adjoining areas for the sixth consecutive day, farmers are rightly convinced that their voices are being shunned down and only one-sided narrative of the government is being pushed forward, which is a clear attack on the fundamental values of the Constitution."

Reliance is placed on Anuradha Bhasin v. Union of India, (2020) 3 SCC 637 and Foundation for Media Professionals v. Union Territory of Jammu and Kashmir & Another (2020) 5 SCC 746, where the Supreme Court had observed,

"access to the Internet is a fundamental right under Article 19 of the Constitution, subject to some restrictions and said freedom of the press is a valuable and sacred right."

The Supreme Court had cautioned that magistrates, while passing prohibitory orders, should apply their mind and follow the doctrine of proportionality.

The lawyers have also opposed erection of multi-layer barricading at Delhi's Ghazipur border, turning the protest sites into a fortress where it seems like they are waging war against their own men.

"Embedding more than 2000 iron nails, multi-layer metal barricades, cement walls, and heavily armed security officials- these cannot be considered as law-and-order situations. This should be rather termed as fortification! These activities are depriving the protesting farmers of their basic human rights and are in gross violation of the Right to Life enshrined under Article 21 of the Constitution."

Inter alia, they have contended that the plight of the farmers is worsening because of the biased reporting by few mainstream media channels.

It is denigrating the peaceful protest and is only adding fuel to the blazing fire. Labeling farmers as "terrorists" by the mainstream media and airing provocative content, the letter states.

In this backdrop, the lawyers have urged the Supreme Court to set up a Commission of Enquiry to probe into:

"This must be done immediately in order to stop the gross injustice which is tarnishing the fabric of our Constitution and causing colossal damage to the sheen of a democratic country. History will not pardon us if we remain mute spectators to this violation of human rights," the letter states.