'You Have Strangulated The Entire City, Now You Want To Come Inside?' : Supreme Court On Farmers Group's Plea For Permission For Satyagraha At Jantar Mantar 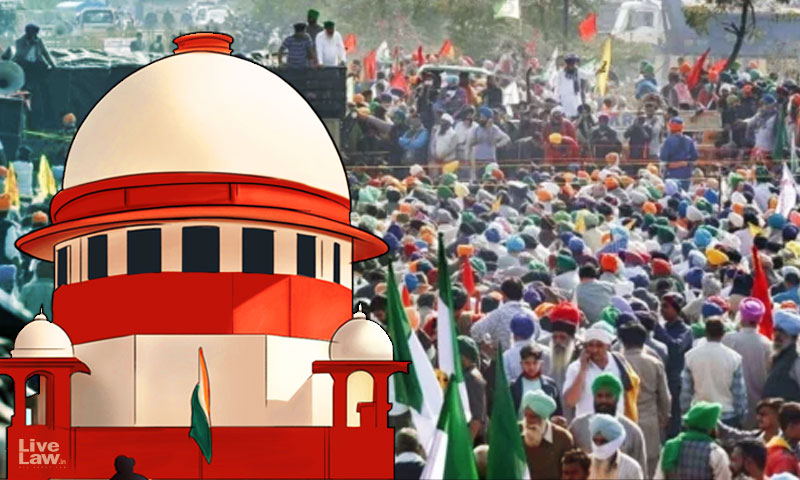 If the farmers groups have already approached the Courts challenging the controversial farm laws, what is the point in continuing with the protests against the laws, asked the Supreme Court today.A bench led by Justice AM Khanwilkar posed this query orally to farmers group "Kisan Mahapanchayat" which has approached the Court seeking permission to hold satyagraha at Jantar Mantar in the...

If the farmers groups have already approached the Courts challenging the controversial farm laws, what is the point in continuing with the protests against the laws, asked the Supreme Court today.

A bench led by Justice AM Khanwilkar posed this query orally to farmers group "Kisan Mahapanchayat" which has approached the Court seeking permission to hold satyagraha at Jantar Mantar in the national capital.

The judge also made critical remarks against the road blockade held by protesting farmers at Delhi-NCR border as part of the protest.

"You have strangulated the entire city, now you want to come inside the city! The residents around, are they happy with the protest?This business should stop. You are obstructing security and defence personnel. This was in the media. All this should stop. There is no point in protest once you come to the court challenging the laws", Justice Khanwilkar said.

The petitioner's counsel Ajay Choudhary submitted that "Kisan Mahapanchayat" is not part of the group of protesters which have organized the road-blockade at Delhi-NCR. He further submitted that the roads were blocked by the police and not the farmers.

The bench, also comprising Justice CT Ravikumar,  asked the counsel to file an affidavit to that effect affirming that the petitioner is not part of the road blockade.

The bench further asked the counsel to serve advance copy of the petition on the Attorney General for India and posted the matter for hearing next Monday.

In a related development, another bench of the Supreme Court led by Justice Sanjay Kishan Kaul had yesterday made oral remarks against the road blockade organized by protesting farmers in Delhi-NCR borders. The bench orally remarked that highways cannot blocked perpetually and that redressal of grievances should be sought through judicial forum or Parliamentary debates.

Details of the petition :

Farmers group "Kisan Mahapanchayat" has approached Supreme Court seeking issuance of directions to the the authorities under the Central Government, Lieutenant Governor and Commissioner Delhi Police ("Respondents") to allow the Mahapanchayat to stage Satyagraha at Jantar Mantar as permitted to Sanyukt Kisan Morcha farmers.

The Kisan Mahapanchayat is a body of agricultural community and farmers across the country protesting against the the three controversial farm laws passed by the Parliament last year.

The writ petition filed through Advocate on Record Ajay Choudhary has also sought for issuance of directions to the Respondents for providing space to at least 200 farmers/ protestors of the Mahapanchayat at Jantar Mantar for organising peaceful and non violent Satyagraha and to not stop them from proceeding towards Jantar Mantar.

Kisan Mahapanchayat in their petition has averred that the "patently discriminatory, arbitrary and unreasonable action" of the Delhi Police in denying the Mahapanchayat from holding peaceful, unarmed and non violent Satyagraha at the designated place Jantar Mantar is in violation of the basic democratic rights enunciated as fundamental rights under the Constitution of India.

"Action of the respondents in permitting the similar protest at the same site is unfair and violative of Right to Equality under Article 14, 19 and 21 of the Constitution of India, 1950," petition states.

It has further been averred that the action of Delhi Police of detaining the Satyagrahis of the Mahapanchayat for the whole day when they were holding Satyagraha in peaceful and orderly fashion as per the Standing order No 10 of 2018 of the Delhi Police is violative of the Fundamental Rights.

Mahapanchayat in their petition has also contended that the Respondent's action is also discriminatory and arbitrary as permission to protest has been granted to another farmer body while denying the petitioner to organise staggered Satyagrah.

The petition is listed tomorrow before the Supreme Court bench led by Justice AM Khanwilkar.