"We Will Not Pass Orders, You Withdraw It":Supreme Court Allows Centre To Withdraw Plea To Restrain Farmers' Tractor Rally On Republic Day 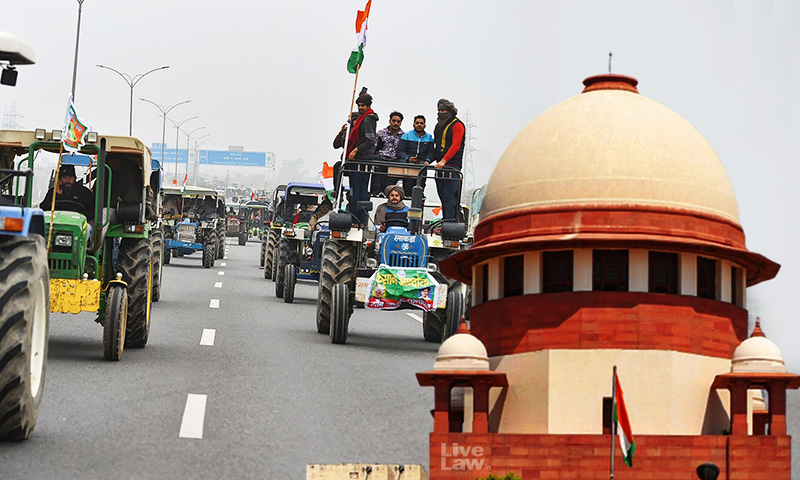 The Supreme Court on Wednesday allowed the Delhi police to withdraw its application seeking for an injunction against the tractor rally proposed to be carried out by farmers in Delhi on the Republic Day to show their protest against the contentious farm laws."The norm is that police decides if permission should be granted or not. You are the executive of the country and have the authority...

The Supreme Court on Wednesday allowed the Delhi police to withdraw its application seeking for an injunction against the tractor rally proposed to be carried out by farmers in Delhi on the Republic Day to show their protest against the contentious farm laws.

"The norm is that police decides if permission should be granted or not. You are the executive of the country and have the authority to take the decision. You have powers to pass appropriate order please do that. The Court cannot interfere. We will not keep it pending," the Supreme Court said.

The development comes after a bench comprising Chief Justice of India SA Bobde, Justices AS Bopanna and V Ramasubramanian refused to keep the application pending, while observing that the Delhi Police have the powers under law to check the law and order situation and that it is not a matter for the court to decide.

On January 18, the Court had orally observed that it is for the Delhi police to decide on the entry of farmers and that the Court cannot be expected to pass orders on a law and order issue.

"The question of entry into Delhi is a law and order situation that is to be determined by the police. We have told the AG and SG before that whether who should be allowed and who should not be allowed and the number of people who can enter are all matters of law and order to be dealt with the by the police. We are not the first authority. You are at liberty to invoke all powers under the law," CJI SA Bobde had told the Attorney General.

Today, on mentioning of the application by the Attorney General during hearing on the pleas against Farm laws, the CJI said,

"We have told that it is for the police to decide. We won't pass the orders. We will allow you to withdraw this application. You are the authority. You decide."

The AG told the Court 5000 tractors are going to enter Delhi. The Solicitor General urged the Court to keep the matter pending and consider it on January 25, to see how the situation develops.

However, the three-Judge Bench refused to consider the matter citing Delhi Police's authority under the law.

Last week, the Supreme Court had told the Delhi Police that it is the 'first authority' to decide whether protesting farmers can be granted entry into the national capital or not.

The Application filed by Delhi Police stated that it has come to the knowledge of security agencies that "a small group of protesting individuals/organisations have planned to carry out a tractor/trolley/vehicle march on Republic Day" and that the march is "slated to disturb and disrupt" the parade as well as create a law and order situation, thereby causing embarrassment to the nation.

Highlighting that right to protest is subject to the countervailing public order and public interest, the Delhi Police submitted that the right cannot include "maligning the nation globally". Noting that the Supreme Court is seized of the issues pertaining to the constitutionality of the Farm Acts and the Farmers' protests, the Application sought for the Top Court to pass an injunction restraining such protest march scheduled on Republic Day.

The Supreme Court had issued notice on the petition on January 12. The CJI later remarked that he need not tell the Union of India that it has powers under law to tackle the situation.

In another significant development, one farmers' union, Bhartiya Kisan Union Lokshakti, filed an application seeking the complete reconstitution of the Committee constituted by the SC for negotiations.