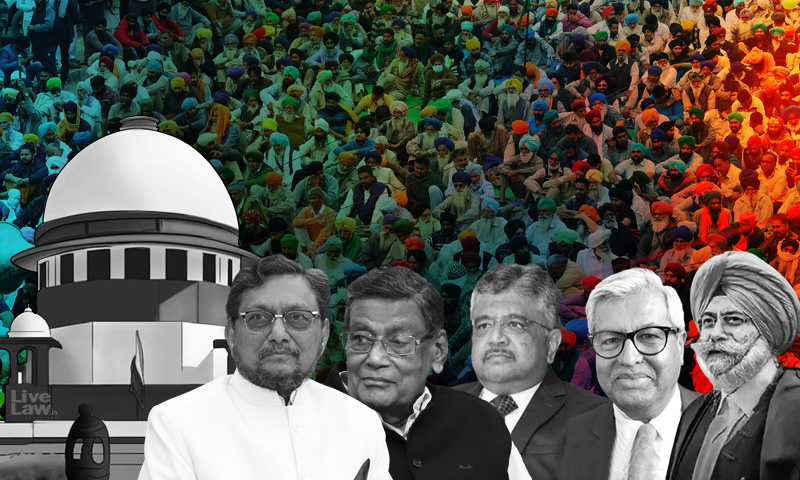 The Supreme Court on Monday made strong oral observations criticizing the Central Government for its handling of the farmers protests.A bench comprising Chief Justice of India SA Bobde, Justices V Ramasubramanian and AS Bopanna was hearing a batch of petitions which seek the removal of the protesting farmers near Delhi borders and also another set of petitions challenging the contentious...

The Supreme Court on Monday made strong oral observations criticizing the Central Government for its handling of the farmers protests.

A bench comprising Chief Justice of India SA Bobde, Justices V Ramasubramanian and AS Bopanna was hearing a batch of petitions which seek the removal of the protesting farmers near Delhi borders and also another set of petitions challenging the contentious three farmers laws.

The CJI, who was presiding the bench, did not mince words in expressing disappointment at the Centre for not having resolved the farmers protests, which had been going on since November 26 last year.

Here are some of the key observations made by the CJI.

"We are sorry to say that you, as the Union of India, are not able to solve the problem. You have made a law without enough consultation resulting in a strike. So you have to resolve the strike.

Not a justification to say previous government suggested the laws

When the Attorney General submitted that the farm laws were the crystallization of the suggestions for agrarian reforms made by various expert panels, some of them appointed during the term of the previous government, the CJI replied :

"It will not help you to say that this was started by last government. We are discussing constitutionality. You are saying negotiations are going on. But what negotiations?

Either you put on hold the laws, or court will stay

"You tell us if you will put on hold the implementation of the laws. Otherwise we will do it. What is the problem in keeping it in abeyance?"

The CJI on more than one occasion shared his unhappiness over the fact that the Centre did not respond to the suggestion made by the Court on December 17 regarding the withholding of implementation of laws. The CJI also noted that many protesters have ended their lives and some have succumbed to cold.

When one of the intervenor submitted that they have trust in the government regarding negotiations, the CJI said:

"Whether you have trust in the govt is immaterial. We are the Supreme Court and we will do what we have to do".

"We have an apprehension that someone will do something a day which will lead to breach of peace.  Each one of us will be responsible if something goes wrong. We don't want anybody's blood on our hands".

"The most serious concern occupying the court is the possible loss of life and property. This is the most important component of our view".

Will not stop protests

"We are not against protests. Don't understand that the Court is stifling protests", the CJI said. The CJI also indicated that the bench will not alter its December 17 order which held that farmers can continue their protests without hindrance in a peaceful manner.

The CJI also indicated that though the court will not stop the protests, it will consider asking the protesters to shift the site of protests elsewhere from the Delhi border roads.

Staying the implementation of laws to facilitate talks before the Committee

The CJI said that the bench was mulling the setting up of an independent committee to resolve the deadlock and will stay the implementation of the laws to facilitate that process.

"We are staying the implementation only to facilitate the talks before the Committee".

Staying the law different from staying the implementation of laws

When the Attorney General cited certain precedents to argue that the Court cannot stay a legislation, the CJI said that staying the law and staying executive actions under a law were different.

"Staying the implementation of laws and staying the law are different.  We can always stay executive action under a law"

The CJI referred to a three-judge bench order that stayed the implementation of 2018 Maharashtra law granting reservation to Marathas in education and job, while hearing a batch of pleas challenging the validity of the law.

Old people and women ought to go back from protest sites

The CJI also wondered why many old people and women were at the protests site.

Senior Advocate Dushyant Dave, appearing for a farmers union, submitted that the old people came to the protest site from their villages on their own as "their very existence was threatened by the laws".

Senior Advocate HS Phoolka, appearing for another farmers union, submitted that these old people came from villages on their own. They were hurt by statements made by Ministers that they were 'naxals', 'khalistanis' etc, as most Punjab families have at least one member serving the Army.

In response, the CJI said :

"Mr.Phoolka, passions are running high. But you must tell them to go back. There is cold. There is COVID. It is not necessary that they(old people) should be there at protests.

Mr.Phoolka you persuade them to go back. At some time, we might say in the order that old people and women need not be there in the protests.

I want to take a risk. I want you to tell them that the Chief Justice of India wants them (old people and women) to go back. Try persuade them".

Justice Sathasivam declined to be part of committee

During the hearing, the CJI revealed that he had spoken to former CJI P Sathasivam seeking his consent to be in the proposed Committee.

"We had talked to Justice Sathasivam, who himself is now a farmer. But he expressed difficulty saying he does not understand Hindi".

SG submitted that the government did its best to hold talks with the farmers and urged the court to remove the impression that nothing was done by the Centre.
Before rising, the CJI said that the bench will pass an order today or tomorrow regarding the stay of the implementation of the laws and the setting up of a committee.