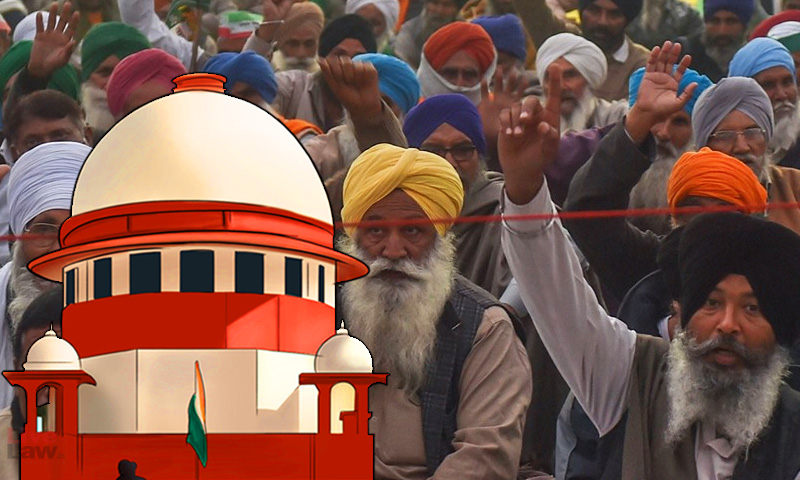 Pursuant to Top Court's direction asking the State of Haryana and Union of India to find solution in a petition which seeks removal of farmers from NCR roads, State of Haryana in its affidavit submitted has told the Supreme Court that although the farmers did not meet the State Level Committee constituted to resolve the issue of agitation on public spaces but the State would continue...

Pursuant to Top Court's direction asking the State of Haryana and Union of India to find solution in a petition which seeks removal of farmers from NCR roads, State of Haryana in its affidavit submitted has told the Supreme Court that although the farmers did not meet the State Level Committee constituted to resolve the issue of agitation on public spaces but the State would continue to persuade protesting farmers to remove blockages on state and national highways.

"Sincere efforts are being made to remove the blockades from interstate roads and national highways and to resume free flow of traffic on these roads for the convenience of general public by way of persuading the farmers and farmers' organisations to cooperate. Regular deliberations are being held by Local Administration from time to time to convince them to remove the blockades as General Public is facing great hardship due to such blockades" the affidavit stated.

The Top Court had asked the State of Haryana and Centre to find a solution.

"The solution lies in the hands of UOI & State. If the protests are on, the traffic isn't stopped in any manner so that to & fro for people is not disturbed," Court had remarked.

State has also said that in compliance with the directions, a meeting was convened on September 10, 2021, through Video Conferencing under the Chairmanship of the Union Home Secretary which was attended by Chief Secretaries and the Home Secretaries of the State of Haryana, Uttar Pradesh and NCT Delhi and the Senior Police Officials of all these states.

"It was deliberated in the meeting to make efforts to open the Inter-State National Highways on both the sides of Delhi Haryana Border," affidavit states.

Further, the State has also submitted that even the District Administration of the concerned districts is also striving to ameliorate the hardships faced by the general public and traffic is being diverted through alternate routes.

"In the past, the District Administration has made earnest efforts to persuade the Farmers/Farmer's Organizations to realign their vehicles including tractor trolleys and hutments etc. in such a manner so as not to block the National Highway/Inter-State roads," Haryana Government stated in their affidavit.

In its affidavit the Haryana Government has also said that even the District Administration in this regard, organized a meeting with the representative of farmers groups on September 14, 2021 making them aware about the inconvenience caused to the general public and were also made aware of the Court's order dated September 23, 2021.

"The representative of farmers groups assured to hold discussions with other members and had indicated their willingness to engage in dialogue with District Administration and the State Authorities," State told Supreme Court.

State of Haryana also apprised the Top Court about the constitution of a State Level committee after a meeting chaired by the Haryana Chief Minister on September 15 to resolve the issue of blockades of inter-State Roads and National Highways by holding discussions with the Farmer's Organization so as to avoid any inconvenience to General Public.

The state submitted before the court that this committee scheduled a meeting to hold discussion with Farmers/Farmer's Organizations on September 19, 2021, at Murthal, Sonipat alongwith the Divisional Commissioner, Rohtak Division, Inspector General of Police, Rohtak Range, Rohtak, Deputy Commissioners and Superintendents of Police of District Sonipat and District Jhajjar.

"Unfortunately the Farmers/Farmer's Organizations did not come forward for discussion with the State Level Committee in spite of being invited to do so," state submitted adding that representative from Industrial Establishment/Units of the surrounding areas in Sonipat District came at their own to attend the meeting and informed the Committee about the myriad difficulties being faced by them.

"However, the State Level Committee would continue to persuade Farmers/Farmer's Organization to hold discussion to resolve the issue," state further submitted.

The PIL was filed by Monicca Agarwaal, a resident of Noida, who had alleged that travelling to Delhi from Noida for her marketing job had become a nightmare as it took 2 hours instead of 20 minutes for two weeks.

The matter was listed for hearing today, was not taken by the bench of Justices SK Kaul and MM Sundresh.