"Farmer Unions Will Not Appear Before Committee, They Are Totally Convinced That Farm Laws Need To Be Repealed": Dave, Bhushan Tell Supreme Court 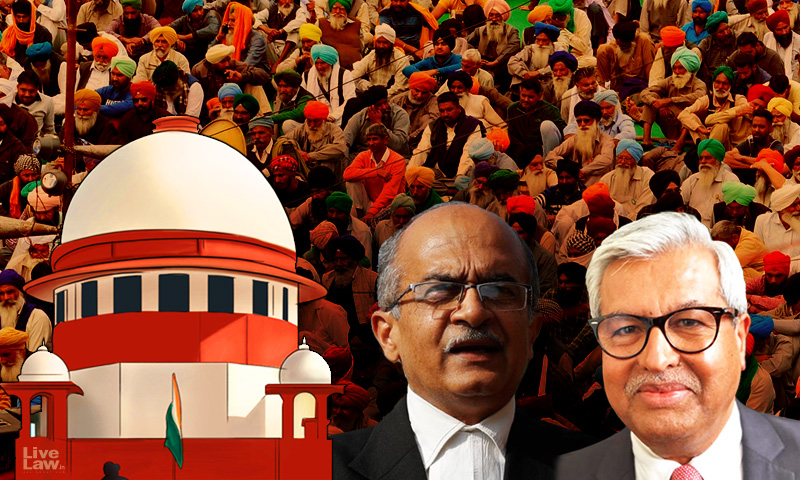 The farmers unions are 'totally convinced' that the farm laws need to be repelled and therefore they will not appear before the committee to discuss amendments, submitted Advocate Prashant Bhushan and Senior Advocate Dushyant Dave before the Supreme Court on Wednesday.Bhushan and Dave are appearing for the eight farmers unions which were added as respondents by the Supreme Court in December...

The farmers unions are 'totally convinced' that the farm laws need to be repelled and therefore they will not appear before the committee to discuss amendments, submitted Advocate Prashant Bhushan and Senior Advocate Dushyant Dave before the Supreme Court on Wednesday.

Bhushan and Dave are appearing for the eight farmers unions which were added as respondents by the Supreme Court in December last year in the cases seeking removal of farmers protesting against the contentious farm laws from Delhi borders.

Bhushan told the Bench led by the Chief Justice of India that the farmers are especially agitating because the impugned Laws were passed without discussions, and without even voting in Rajya Sabha.

Bhushan and Dave told the bench that their clients have taken a stand to not participate in the talks held by the Committee constituted by the Court on January 12 to negotiate on the farm laws.

The bench, also comprising Justices AS Bopanna and V Ramasburmanian, recorded this submission in the order passed to issue notice on an application filed by Bharatiya Kisan Mahapanchayat seeking reconstitution of the committee.

Dave also clarified that his non-appearance on the last occasion (January 12) was due to his 'bona fide understanding' that the case was listed for orders and not for hearing.

He made this clarification after the CJI asked why he did not appear when the order constituting the committee was passed.

"Last time Dave said he will get instructions and he did not appear on the next day", CJI said.

CJI to Dave: Normally you are happy to appear. But on that day you were unhappy?

The CJI SA Bobde on Wednesday observed that the protesting farmers and their unions should be counselled to change their attitude and look forward for resolution of the dispute.

"We are calling upon you to counsel your clients in such a way to bring peace. We want a resolution of the dispute.

We are requesting you to advise them to change their attitude and counsel them," CJI SA Bobde told Advocate Prashant Bhushan.

The remarks were made after Bhushan told the Court that the unions are not ready to appear before the Committee appointed for the purpose of holding talks with the Central Government on the three contentious farm laws.

Bhushan assured the Bench that he has been counselling the Unions to maintain peace and even on the proposed Republic Day rally, they wish to do it peacefully; to celebrate republic day.

"They have issued a call that there should be absolute peace," Bhushan informed the Bench.

At this juncture, the Attorney General intervened to state that 5,000 tractors are likely to enter Delhi on Republic Day and hence, it will be impossible to maintain the roads. "They will go all over the city," he submitted.

The CJI however expressed trust over Bhushan's submissions that the farmers wish to demonstrate peacefully, and told the AG that the matter is purely in the domain of executive.

"We Will Not Pass Orders, You Withdraw It":Supreme Court Allows Centre To Withdraw Plea To Restrain Farmers' Tractor Rally On Republic Day

During the hearing, the CJI had told the AG that the question of entry into Delhi is a law and order situation that is to be determined by the police.

"The norm is that police decides if permission should be granted or not. You are the executive of the country and have the authority to take the decision. You have powers to pass appropriate order please do that. The Court cannot interfere," the CJI observed following which the Delhi police withdrew its application seeking injunction against the rally.

Related development: Supreme Court Issues Notice On Plea For Reconstitution Of Committee To Resolve Deadlock Between Farmers and Govt