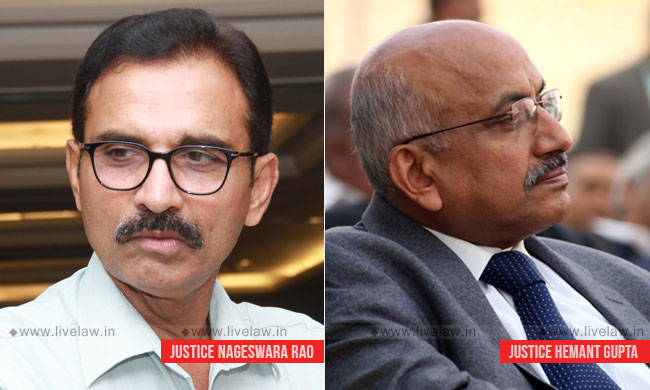 The Supreme Court has held that as per Mitakshara Law of Succession, father's self-acquired property given to son by way of Will/gift will retain the character of self acquired property and will not become ancestral property, unless a contrary intention is expressed in the testament.

The bench comprising Justices L Nageswara Rao and Hemant Gupta was dealing with an appeal from the High Court of Gujarat (Govindbhai Chhotabhai Patel and ors v Patel Ramanbhai Mathurbhai).

Chhotabhai Ashabhai Patel executed a gift deed in favour of his son Ramanbhai Mathurbhai Patel in 1977. Chottabhai died in 2001. The other sons of Chhotabhai filed a suit challenging the gift and claiming share of the property. They claimed that Chottabhai had inherited the property from his father, and therefore it was ancestral property. Another contention was raised that the attestation of the gift deed was not proved.

The primary question before the Supreme Court was the property in the hands of Donor (Chhotabhai) was ancestral property by virtue of him having inherited from his father.

The Court noted that the issue was settled in 1953 by the Supreme Court in the decision C N Arunahcala Mudaliar v C A Muruganatha Mudaliar AIR 1953 SC 495. The Court while examining the question as to what kind of interest a son would take in the self-acquired property of his father which he receives by gift or testamentary bequest from him, it was held that Mitakshara father has absolute right of disposition over his self-acquired property to which no exception can be taken by his male descendants. It was held that it was not possible to hold that such property bequeathed or gifted to a son must necessarily rank as ancestral property. It was further held that a property gifted by a father to his son could not become ancestral property in the hands of the donee simply by reason of the fact that the donee got it from his father or ancestor.

It was observed in that case :

"In view of the settled law that a Mitakshara father has right of disposition over his self-acquired property to which no exception can be taken by his male descendants, it is in our opinion not possible to hold that such property bequeathed or gifted to a son must necessarily, and under all circumstances, rank as ancestral property in the hands of the donee in which his sons would acquire co-ordinate interest…"

In this case, the Court found that the plaintiffs had not produced the Will by which the Donor (Chhotabhai) had obtained the property from his father. Therefore, there was no means to ascertain if there was any intention expressed in the Will that the property should take the character of ancestral property.

"In view of the undisputed fact, that Ashabhai Patel purchased the property, therefore, he was competent to execute the Will in favour of any person. Since the beneficiary of the Will was his son and in the absence of any intention in the Will, beneficiary would acquire the property as self-acquired property in terms of C.N. Arunachala Mudaliar case."

It is the plaintiff's burden to prove that the property is ancestral :

"The burden of proof that the property was ancestral was on the plaintiffs alone. It was for them to prove that the Will of Ashabhai intended to convey the property for the benefit of the family so as to be treated as ancestral property. In the absence of any such averment or proof, the property in the hands of Donor has to be treated as self-acquired property. Once the property in the hands of Donor is held to be self-acquired property, he was competent to deal with his property in such a manner he considers as proper including by executing a gift deed in favour of a stranger to the family."

The Court also held that the donee is not required to prove the attestation of the gift unless its execution is specifically disputed by the plaintiff.

In a judgment delivered in July, the SC had held that property inherited from father by sons becomes joint family property in the hands of sons. But that was a case of intestate succession, unlike the present case, where it was by way of a deed.

In this case too, the SC distinguished another SC decision cited by the appellants Shyam Narayan Prasad v. Krishna Prasad & Ors (2018) 7 SCC 646 by saying "The question examined in the aforesaid case was in respect of status of the property after partition. The said question is not arising in the present case as it is not a question of partition but testamentary succession in favour of the Donee."