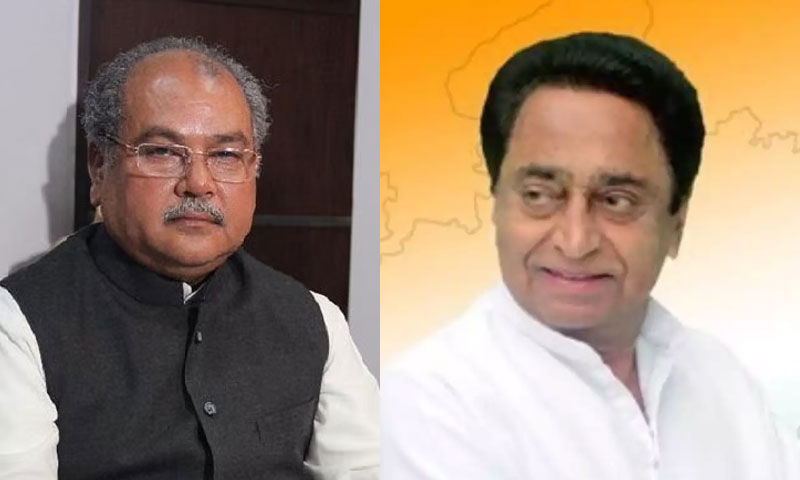 While observing that despite the High Court's strict orders, the Political Gatherings were attended and addressed by candidates, political/governmental/State functionaries in the State, the Madhya Pradesh High Court on Tuesday (20th October) in a strongly-worded order observed,"The common agenda of the political parties appear to be to conduct as many and as large congregations as possible...

While observing that despite the High Court's strict orders, the Political Gatherings were attended and addressed by candidates, political/governmental/State functionaries in the State, the Madhya Pradesh High Court on Tuesday (20th October) in a strongly-worded order observed,

"The common agenda of the political parties appear to be to conduct as many and as large congregations as possible with the ultimate object of gaining popularity during the election campaign. This obviously is done at the cost of health and lives of those gullible and innocent citizens of this country who come from lower strata of society and are unaware of the risk they incur to their lives by being a part of such congregations."

The Division Bench of Justice Sheel Nagu and Justice Rajeev Kumar Shrivastava, was hearing a plea seeking directions for respondents authorities to take action to restrain the function organized by the political parties in the State.

Notably, the Bench also directed the District Magistrates of Datia and Gwalior to ensure the registration of FIR against Central Minister Narendra Singh Tomar and Ex-CM Madhya Pradesh Kamal Nath for the alleged commission of the cognizable offence of breach of Covid-19 protocol.

Significantly, the Counsel for the petitioner (Ashish Pratap Singh) informed the Court that on 05.10.2020 at Modi House, Opposite Landmark Hotel, Gwalior, Narendra Singh Tomar, the Hon'ble Minister of the Central Cabinet and M.P. from Morena was present and he addressed the political gathering but no FIR was lodged against Minister Tomar.

It was also informed to the Court that a congregation took place on 05.10.2020 at Bhander, District Datia (M.P.) in the presence of Kamal Nath, Former Chief Minister of State of M.P., but no FIR was lodged against Kamal Nath.

Apart from this, Court by an interim order directed thus:

2. The decision of the District Magistrate permitting any political party to conduct physical congregation shall become effective only after the Election Commission of India approves the same in writing.

Notably, on 18th September, the Madhya Pradesh High Court had observed that "law, whether statutory or in the shape of the executive instructions deserves respect & obedience, as much from a common man as from a leader, a political functionary and even the head of State."

Further, the High Court on Saturday (03rd October), in the public interest, passed some interim orders to prevent the Political Congregation in the State (specifically in the 9 districts falling within the territorial jurisdiction of the Bench).

The Bench of Justices Sheel Nagu and Rajeev Kumar Shrivastava had instructed the State Authorities to invoke the penal provisions of DMA, IPC against political/governmental/state or social functionaries (Para (E) of the order dated 03.10.2020).

Further, on Monday (12th October) the Court had directed the District Magistrates to treat the contents of I.A.6084/2020 in which the petitioner had revealed facts about the congregations held by different political parties and the contents of three reports of amicus curiae, as first information for the purpose of registration of a cognizable offence u/S.154 Cr.P.C. not only against the defaulting common man who is part of the congregations but in particular the political/State/Governmental functionaries in whose name or on whose behalf and in whose presence such congregation were held.

The amicus curiae in the matter drew attention of the Court to his 04th report which revealed holding of more such congregations where social distancing and wearing of masks was not followed and yet the congregations were attended and addressed by candidates, political/governmental/State functionaries.

However, the Court noted that there is much higher and sacred right to life which is guaranteed to every citizen u/Art.21 of the Constitution.

"In the factual matrix attending the present case, on one hand is the right of candidate to campaign during election process and on the other hand is the right of a common man of preservation of his right to health and life. Campaigning which is being conducted by various candidates of political parties as has come to the notice of this Court is being done primarily through congregations where social distancing, wearing of masks and use of sanitizers are not being followed putting the health and lives of the members of congregation to risk."

"The circumstances in the present case are extremely unfortunate where the political leaders, who are supposed to lead by example of conduct, behaviour and character have done little to protect the health and life of the common man by drawing him out of his home to be part of the congregation called out by the political parties for gaining popularity and votes for the election."

The Court also noted that in the COVID-19 protocol issued by the Election Commission of India suggestions have been made without making it mandatory for political parties to conduct virtual election campaign to avoid physical congregations.

"Virtual election campaign with the aid of electronic means is certainly more expensive than holding a physical meeting but in the extraordinary circumstances of ongoing Covid-19 pandemic which is at its peak in our country, it is time for the candidates to realize and adopt extraordinary means to conduct an election campaign by virtual mode."

Lastly, the Registry has been directed by the Court to communicate the order to the Additional Advocate General and District Magistrates all nine districts falling within territorial jurisdiction of the Bench.

It may be noted that Madhya Pradesh Chief Minister Shivraj Singh Chauhan, in a video message, has informed that the Madhya Pradesh government has decided to approach the Supreme Court against the decision of the Gwalior Bench of the High Court to restrict physical political rallies in nine districts in view of the coronavirus pandemic.