If Banned Firecrackers Found To Be Made Or Used, Authorities Will Be Held Personally Liable : Supreme Court [Read Order] 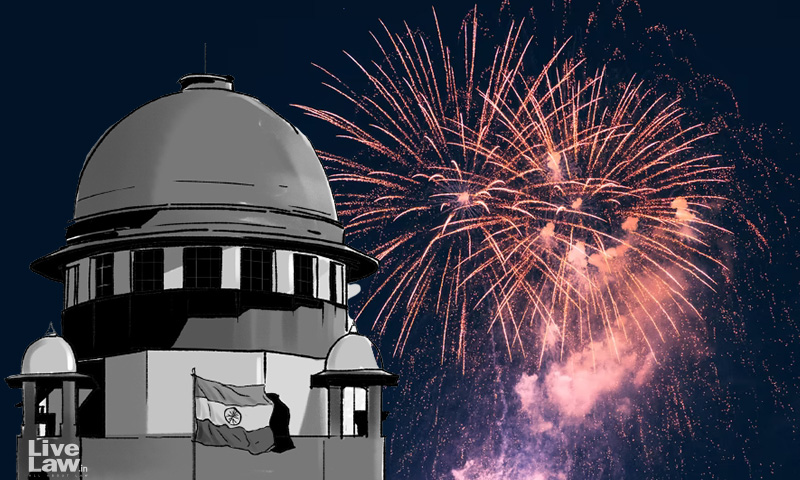 The Supreme Court on Friday issued a series of directions to ensure the strict implementation of its earlier orders banning the use of barium-based chemicals in fire crackers and allowing only the use of "green crackers".A bench comprising Justices MR Shah and AS Bopanna held that that if it was found that any banned firecrackers are manufactured, sold and used in any particular area, the...

The Supreme Court on Friday issued a series of directions to ensure the strict implementation of its earlier orders banning the use of barium-based chemicals in fire crackers and allowing only the use of "green crackers".

Lapses will be viewed seriously; authorities will be held personally liable.

The bench also directed the States/Union Territories to see that its directions issued earlier and today are strictly complied with in its true spirit and in toto. It also said that any lapse on part of State Governments/State Agencies and Union Territories shall be viewed seriously.

Not total ban on the crackers

The Court in its order made clear that there was no total ban on use of firecrackers and said that only those firecrackers were banned that contained barium salts.

"It is made clear that there is no total ban on use of firecrackers. Only those firecrackers are banned, as directed hereinabove, which are found to be injurious to health and affecting the health of the citizens, more particularly the senior citizens and the children," Court further said.

Give wide publicity to the order : SC directs States/UTs

The bench further directed the States/Union Territories to give due publicity through electronic media/print media/local cable services to make the people aware and know the directions issued by the Apex Court with respect to manufacture, use and sale of banned firecrackers.

Bench also noted in its order there was an occasion wherein Fireworks Manufacturers had sought relief for permitting them to manufacture fireworks with Barium substitute i.e Barium Nitrate the Top Court observed that the same had not been permitted till date and that the use of Barium Salts in the fireworks continued to be banned.

Fake green crackers are there in market

"Even though they are banned, the manufacturing, selling and using of joined firecrackers have been continued and the same is being used in blatant violation of the directions issued by this Court. It is reported that even under the guise of 'green crackers' banned chemicals firecrackers are being sold and there is a mislabelling on the boxes and even the QR codes provided on the boxes of 'green crackers' are alleged to be fake," bench further noted in their order.

Observing the fact that even the Top Court had earlier issued directions from time to time in the larger public interest and having found that such use of banned fireworks affects the health of the other innocent citizens including the senior citizens and the children the Court in its order said,

"It is the duty of all the States/State Agencies to see that the directions issued by this Court in the earlier orders reproduced hereinabove are strictly complied with. No authority can be permitted the violation of the directions issued by this Court and permit banned firecrackers under the guise of celebration. Celebration cannot be at the cost of the other's health. Under the guise of celebration, nobody can be permitted to infringe the right to health of the others, guaranteed under Article 21 of the Constitution of India and nobody can be permitted to play with the life of the others, more particularly the senior citizens and the children."

With regards to the report that was submitted by the CBI as per which banned firecrackers were being sold and used in the markets, the bench said that the allegations, if found to be true, were very serious and could not be tolerated.

Remarking that everybody including the implementing agencies were bound to see that the Top Court's directions were issued and followed in true spirit, the Top Court said that,

"It prima facie appears that the implementing agencies of the concerned States either lack desire to implement the directions issued by this Court or they close their eyes for whatever reasons. Despite the use of Barium Salts in the firecrackers was banned; manufacture and use of the joined fireworks have been banned and transporting and selling them across the country have also been banned physically and/or online, the banned firecrackers are being manufactured, transported, sold and used."

The directions have been issued in the application which had sought for issuance of the following directions:

a) ban the sale, purchase and use of firecrackers in India;

b) State Governments and police to take immediate appropriate steps against anyone seeking to manufacture, sell or purchase firecrackers;

c) District Magistrates and Superintendents of Police of every district be made personally accountable if the order for a complete ban on the manufacture, sale, purchase and use of firecrackers is violated;

d) The Delhi Police be directed to state on affidavit the senior level officer(s) that are to be responsible and personally accountable for ensuring that the ban on transportation of fireworks into Delhi and NCR from outside regions is properly enforced and violators caught and punished; and

The application had also brought on record the tests done by 'Awaaz Foundation' alleging that the banned firecrackers are being manufactured, used and sold though they are specifically banned by this Court and alleging that 'green crackers' are being sold in the market by fireworks manufacturers containing chemicals that have been banned by this Court and not only that but even the fake QR codes are printed on the boxes and mislabelling them as 'green crackers'.

The Top Court will now hear the application on November 30, 2021.