Appears That Displaying Of Fireworks Has Been Integral Part Of 'Thrissur Pooram': SC Allows Fireworks During The Festival [Read Order] 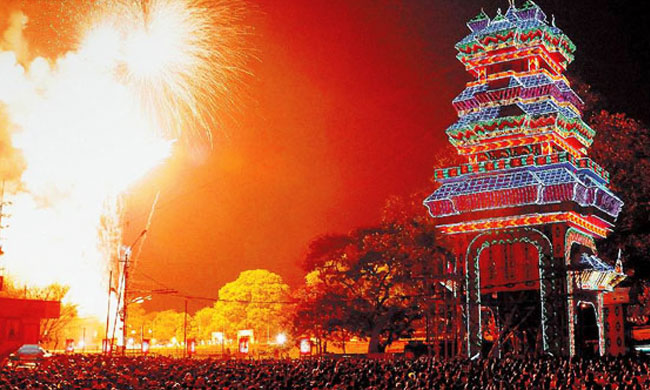 "We see no reason why the festivity should be suspended."

The Supreme Court has allowed displaying of fireworks during 'Thrissur Pooram', a famous festival in Kerala.

Thrissur Pooram is an annual temple festival held at the Vadakkunnathan Temple in Thrissur every year on the Pooram day.

Before the bench comprising Justice SA Bobde, Justice Mohan M. Shantanagoudar and Justice Indira Banerjee, Senior Advocate R. Basant, who appeared for the temple management submitted that these temples have been celebrating the 'Thrissur Pooram' festival since 1798. The temple management had approached the court seeking permission to use fireworks during the festival which falls between 7-14 May, this year.

"It appears that displaying of fireworks has been an integral part of the celebration of this festival. Hence, we see no reason why the festivity should be suspended."

The bench noted that the temples get the fireworks manufactured through their own licensees. The court added:

"They may do so subject to the written approval to be granted by the PESO recording the new formulation that can be used in the firecrackers. However, they shall ensure that barium is not used in the fireworks."

The court, however, cautioned the temple and said that they must take care that the fireworks manufactured for the festivity are used and retained by them and do not find their way into the market. The fireworks will be displayed according to the usual customs of the temples, the bench said.

In a judgment delivered  in october last year, the Supreme Court had said that only less polluting green crackers can be sold, that too only through licensed traders. The Court had banned online sale of firecrackers, restraining e-commerce websites from carrying out its sale.It also fixed duration for bursting of crackers. On the day of Diwali and other religious festivals, it will be between 8 PM and 10 PM. On Chirstmas eve and New Year, it will be allowed only between 11.45 PM and 12.45 AM. It was  also ordered that crackers can be burst only in designated areas.