'First Few Years Of Practice Must Be Confined To Trial Courts' : Chief Justice A S Oka's Advice To Young Lawyers 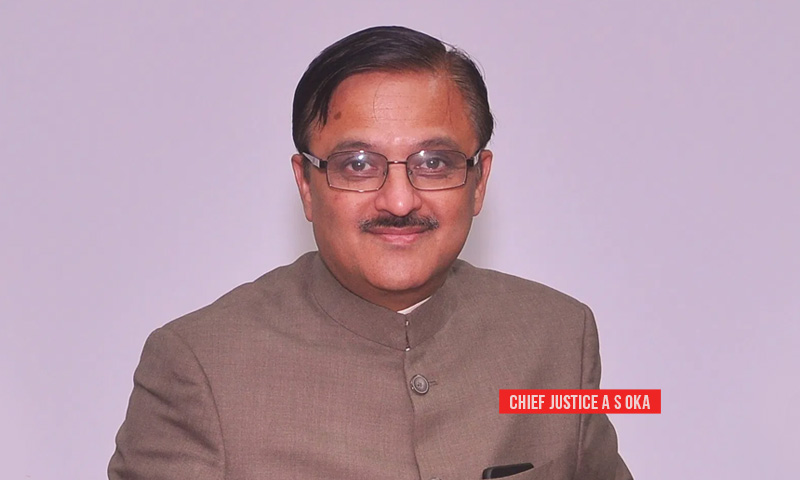 Chief Justice Abhay Shreenivas Oka of the Karnataka High Court shared his insights about lawyering and justice in an e-seminar hosted by The Roots Resources and NALSAR'S Nyaya Forum. In the interview, Justice Oka shared his views and experiences for the benefit of students and young lawyers who wished to construct a career in litigation."THE WORK AT TRIAL COURT LEVEL IS A...

Chief Justice Abhay Shreenivas Oka of the Karnataka High Court shared his insights about lawyering and justice in an e-seminar hosted by The Roots Resources and NALSAR'S Nyaya Forum.

In the interview, Justice Oka shared his views and experiences for the benefit of students and young lawyers who wished to construct a career in litigation.

"THE WORK AT TRIAL COURT LEVEL IS A GREAT EDUCATION"

The first question of the conversation was related to the significance of trial court lawyering. Justice Oka commented that, "If you want to practice in High Court or Supreme Court and if you want to really succeed, then you must ensure that the first few years of practice must be confined to the trial courts"

He further observed that, in laws schools the enthusiasm related to the procedural aspects of law are facing a serious dearth. And for students, the practice at the trial courts are among the least priorities. And he made his point concrete by placing examples of requisites required while drafting a plaint and written statement in a civil case.

His words are,, "Now, no law schools are going to tell you how to visualise what will happen at the time of trial ,while you take up the work of drafting a plaint."

He added, the trial court practice opens up a brilliant opportunity to grasp the working of a human mind. When the client approaches you and brief the facts to you in the first place,this will improve a lawyer's skillsets to ascertain the truth from the client. And interacting with client is also a learning experience.

As per Justice Oka, some of the indispensable knowledge that trial Court practices can only impart :

In the case of criminal trials, it is cardinal that, before you conduct a trial you must visualise on the basis of the materials available on the charge sheet and in what manner the incident that is complained must have happened, observed Justice Oka.

Also Justice Oka had discerned his view that, the experience of a young trial court lawyer who begins his practice today will not find any major differences from his prior generation of lawyers, because the procedure of law has never undergone any leading changes and only there might occur some marginal differences.

On the aspect of 'Access to justice', Justice Oka had observed that, in our country due to varying reasons we have innumerable number of people who are denied of access to courts and silently suffering injustice. And the greater debate of access to justice must give focus towards such kind of people

He added, a wrong image that tarnished the great initiative of legal aid is spreading all over and it is nothing other than regarding the inefficiency of those lawyers who conducts the legal aid cases. And as a cure to this wrong perception, all lawyers must offer their services as legal aid lawyers and must conduct one or two legal aid cases per month. That will create a substantial improvement in the access to justice aspect.

And equally, all the stake holders must remain pro active especially in the present pandemic situation and ensure that access to justice is not denied to anyone.

"the object of conducting legal literacy seminars are not to encourage the litigants to go to the court, the object of the legal literacy seminars are to ensure that every person must made aware that the legal remedies are available in cases he suffers any injustice, and every one must made aware of his fundamental duties and the duties as a citizen "

THE REAL PRACTICE OF LAW LIES BEFORE THE TRADITIONAL COURTS.

According to Justice Oka, traditional courts are institutions where real form of practice flourishes. He says, While practicing before the traditional courts, you will become instruments to give justice to poor people who deserves the justice most. So every law student must be equipped with knowledge in procedural laws.

TRIAL COURTS ARE NOT 'LOWER' COURTS

On a question related to one of his recent administrative order preventing the usage of 'subordinate courts' as 'lower courts' by the appellate courts , Justice Oka had commented that every court play a prime role in the business of administration of justice and the differences are only in terms of nature of cases, procedures and scope of adjudication, etc.

"If you closely analyse the functioning of all courts, …….every court plays equally an important role in the administration of justice and the differences are only in terms of nature of cases, procedure and scope of adjudication. But not withstanding all these differences, I must say that a court of civil judge in the taluk level is as important as our supreme court, the reason is immediate relief is to be given to the litigant and it can only be given by our trial courts. Fate of our litigants are decided before our trial courts".

He further added, If pleadings are not proper, if the evidences are not properly recorded then there are hardly anything can be done by the higher courts, there are very limited powers at appellant stage in the matter of evidences . Every court is doing equally important jobs irrespective of its status

Regarding the best advices Justice Oka had received while he was a junior, the most important was the honesty towards the client. And apart from honesty he believes in observation . For a lawyer observation is the key towards success.

The one hour long web based conversation concluded with his advices to the young lawyers to become more reasonable towards the profession by showing an unrelenting enthusiasm upon the activities of legal service authorities in all levels and He believes that, the same will translate a right message to the society and to those who are in need.