Forests In Alagar Hills Does Not Belong To The Deity, Holds SC [Read Judgment] 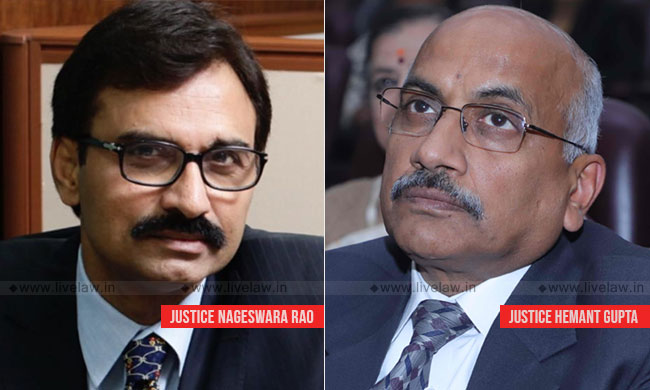 x
"Presumption of lost grant cannot be applied when there is no evidence of continuous possession under an assertion of title.

The Supreme Court, on Wednesday, set aside the Madras High Court judgment which held that the the entire forest area in Alagar Hills belongs to the deity of Arulmigu Kallalagar Thirukoil Alagar Koil.The bench comprising Justice L. Nageswara Rao and Justice Hemant Gupta held that the presumption of lost grant cannot be applied when there is no evidence of continuous possession under an...

The Supreme Court, on Wednesday, set aside the Madras High Court judgment which held that the the entire forest area in Alagar Hills belongs to the deity of Arulmigu Kallalagar Thirukoil Alagar Koil.

The bench comprising Justice L. Nageswara Rao and Justice Hemant Gupta held that the presumption of lost grant cannot be applied when there is no evidence of continuous possession under an assertion of title.

Sundara Ramanuja Periya Jeer Swamigal of Periya Jeer Swamigal Mutt, Tirupati and others had filed a suit for a declaration that the entire forest area in Alagar Hills to Sri Arulmighu Kallalagar also called Sri Sundarajasami or Sundara Bahu or Paramasamy, the Presiding Deity of the temple.

The Trial Court dismissed the Suit accepting the contention of the Government that the suit property was declared as a reserved forest in 1881 was accepted by the trial Court. In appeal, the High Court, applying the principle of lost grant held that adequate material has been produced by the temple to prove its title of the temple over Alagar Hills, and therefore directed it to be reverted to the temple.

In appeal filed by the state, the Apex Court bench held that the Temple was not in continuous possession under an assertion of title as there is no evidence on record to reach such a conclusion. The presumption of lost grant is therefore not permissible and the finding recorded by the High Court that there is adequate material to hold that Alagar hills belong to the temple is erroneous, said the bench. The bench referred to these observations in Sri Manohar Das Mohanta v. Charu Chandra Pal:

The circumstances and conditions under which a presumption of lost grant could be made are well settled. When a person was found in possession and enjoyment of land for a considerable period of time under an assertion of title without challenge, Courts in England were inclined to ascribe a legal origin to such possession, and when on the facts a title by prescription could not be sustained, it was held that a presumption could be made that the possession was referable to a grant by the owner entitled to the land, but that such grant had been lost. It was a presumption made for securing ancient and continued possession, which could not otherwise be reasonably accounted for. But it was not a presumptio juris et de jure, and the Courts were not bound to raise it, if the facts in evidence went against it. "It cannot be the duty of a Judge to presume a grant of the nonexistence of which he is convinced" observed Farwell, J. in Attorney-General v. Simpson [(1901) 2 Ch D 671, 698]. So also the presumption was not made if there was any legal impediment to the making of it. Thus, it has been held that it could not be made, if there was no person competent to be the recipient of such a grant, as where the right is claimed by a fluctuating body of persons. That was held in Raja Braja Sundar Deb v. Moni Behara [1951 SCR 431, 446] . There will likewise be no scope for this presumption, if there is no person capable of making a grant: (Vide Halsbury's Laws of England, Vol. IV, p. 574, para 1074); or if the grant would have been illegal and beyond the powers of the grantor.