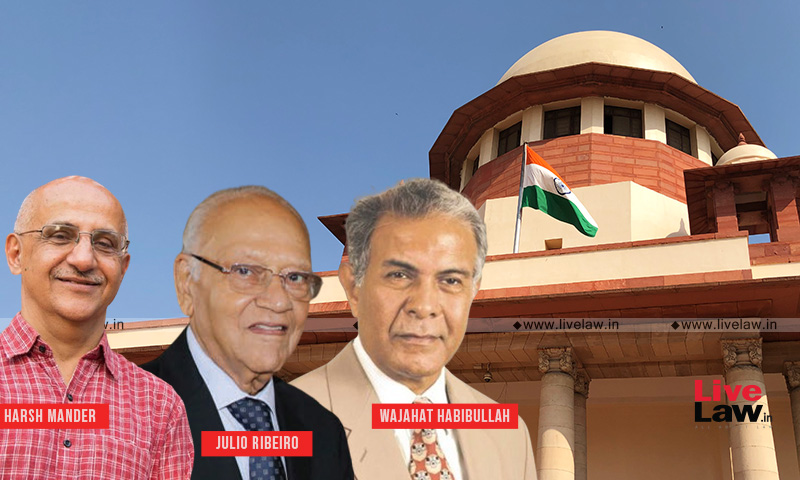 The Supreme Court on Wednesday issued notice on a Writ Petition filed by petitioners- who have all been former IAS/IPS/IFS officials- challenging the vires and validity of the various provisions of the draconian anti-terror law Unlawful Activities Prevention Act, 1967On Wednesday, a Bench comprising the Chief Justice of India NV Ramana, Justice DY Chandrachud and Justice Surya...

The Supreme Court on Wednesday issued notice on a Writ Petition filed by petitioners- who have all been former IAS/IPS/IFS officials- challenging the vires and validity of the various provisions of the draconian anti-terror law Unlawful Activities Prevention Act, 1967

On Wednesday, a Bench comprising the Chief Justice of India NV Ramana, Justice DY Chandrachud and Justice Surya Kant issued notice to the Union Government on the petition and directed that it be tagged along with a similar petition.
Senior Advocate Chander Uday Singh represented the petitioners, who include former former IAS officials Harsh Mander, Wajahat Habibullah, Amitabha Pande, Kamal Kant Jaiswal, Hindal Hyder Tyabji, MG Devasahayam, Pradeep Kumar Deb, Baldev Bhushan Mahajan, decorated former IPS officer Julio Francis Ribeiro, former IFS officer Ashok Kumar Sharma, and ex-IPS Dr.Ish Kumar.
The Petition deals with four issues primarily- lack of protection to the rights of individuals being tried on the charges of being "terrorists", lack of protection of the rights of individuals charged with carrying out "unlawful activities", the process of sanction under Section 45 of the Act and the restrictions on the grant of bail under proviso to Section 43D(5).

The Petition submits that the abysmally low rates of successful prosecution and the fact that citizens find themselves being incarcerated for long period and some even having died while incarceration point to the fact that "the proviso to Section 43D(5) is arbitrarily used to quell dissent than to achieve the actual objectives of the Act."

The Petition also seeks that the Respondent be directed to publish the name of every person against whom prosecution is sought to be initiated in the Fourth Schedule; provide the detailed sanction order containing reasons reflecting the independent review of the material by the sanctioning authority; set up a suitable scheme for compensating people who are incarcerated under the UAPA and who are eventually acquitted, with the quantum of compensation increasing in proportion to the time spent in jail.

The Petition makes detailed submissions on the following grounds:

The petition submits that the second part of the definition of "terrorist act" under the Act, says that a "terrorist act" is an act whereby terror is caused, with no definition of terror being given in the UAPA. The Petition submitted that: " accusing a person of having committed a "terrorist act", by saying the person "struck terror" cannot be sustained, in the absence of a definition of the word "terror"....the term "…with intent to strike terror or likely to strike terror in the people…", is open-ended, ill-defined, and arbitrary. This arbitrariness and lack of precision in a definition which affects the life and liberty of an individual, cannot be sustained, and is required to be struck down.

"for individuals whose names do not get included in Schedule 4, but for whom the government has given sanction (based on cogent material and evidence), such individuals have to undergo a lengthy trial process to clear their names, without any application process or Review process being made available to such individuals"

The petition further submits that the classification of terrorists into two categories- one whose names is included in Schedule 4 and those whose name are not- is incorrect and flawed, and not only is permissible under the UAPA, but is also contrary to Article 14.

The petition further submits that the Government has arrogated to itself the discretion to either publish the name of an individual being prosecuted for "terrorism" in Schedule 4, or to prosecute the person for terrorism without publishing the name of the person in Schedule 4 and that this discretionary power does not flow from the UAPA, and is completely antithetical to not only the UAPA but also the constitutional mandate contained in Articles 14 and 21.
The petition prays that protections, identical to those available under Fourth Schedule be made available for all people whose names are not published in the Fourth Schedule but in whose case sanction for prosecution under UAPA is granted by the Government.
Lack of protection to the rights of people accused of "unlawful activities"
The petition points out that whereas "unlawful associations" get protection mechanism under the Act, persons accused of "unlawful activities" are not granted similar protection. It prays that the principle of parity requires that there has to be a similar protective mechanism for individuals accused of having carried out the same kind of unlawful activity as an "Unlawful Association".
Process of sanction under Section 45
The Petition points out that the only protection available to such individuals accused of carrying out "terrorist acts" and who do not have their names published in the Fourth Schedule, and individuals who are accused of "unlawful activities", is contained in Section 45.
The Petition submits that while the Review Committee (under Section 35 and 36) is required to apply judicial principles, no such standards are set for the authority granting sanction, thus reducing the "independent review" prior to grant of sanction to a mere administrative exercise, for which no yardsticks are laid down.
It further submits that:

"At no point in the "independent review" or grant of sanction, does an individual accused of having committed a "terrorist act" or an "unlawful activity" have the right to be heard. Furthermore, the sanctioning authority, who is expected to carry out an "independent review" of the materials against a person, is statutorily given a mere seven days to complete this exercise. Thus it is apparent that the process of "independent review" is a mere eye-wash."

The Petition also draws attention to the fact that no Rules have been made under Section 52 of the UAPA as to how and in what manner the sanctioning authority is required to "independently review" the evidence.

The Petitioners submit that "a meaningful pre-sanction "independent review" process will necessarily require the entire material upon which sanction is sought, being made available to the accused person. The accused individual can then examine the "independent review" process and sanction, in light of legal principles and judicial decisions on the issue, and thereafter, if aggrieved, have the right to seek judicial review of the sanction process."

The Petition annexes a copy of the reply given by the Ministry of Home Affairs in Lok Sabha detailing the number of persons arrested and convicted under the UAPA during 2015-2019:

The Petition points out that the average rate of conviction has been 2.19 percent and in that light, it submits that "prosecution under the UAPA is either initiated in "bad faith", or the quality of the evidence is not sufficient, bringing into question the entire process of "independent review" prior to grant of sanction."

It submits that in the absence of a truly independent reviewing authority, the entire exercise of pre-sanction review of evidence is reduced to a sham and mere lip service to principles of law. The Petition cites the example of Crown Prosecution Services in the UK as an example of an independent body to independently review the evidence collected by the investigating authority.

On S.45 of the UAPA Act, the Petition submits that: "a law, which permits the continued incarceration of a human being on the basis of mere "prima facie" opinion and does not permit bail, is a truly unjust law, and if the same is to remain on the statute book, the person whose prolonged and indefinite incarceration is sought must be given every opportunity to challenge such incarceration, especially if, as the current statistics seem to suggest, there is a 97.81 percent probability that the person will eventually be acquitted."

The petition further challenges the constitutionality of Proviso to Section 43D which mandates that a person shall not be released on bail if the court is of the opinion that there are reasonable grounds for believing that the accusation is "prima facie" true. It submits that the Proviso is arbitrary and unreasonable and tested against Art.14, 19 and 21, liable to be struck down especially since the UAPA Act is not a law enacted for preventive detention.
The Petition submits that since UAPA is not a preventive detention law, there is no justification to deny a person the right to bail merely on the basis of an accusation.
The Petition submits that the use of the words "…reasonable grounds for believing that the accusation against such person is prima facie true…" shift the onus upon an accused to show that even prima facie no case is made out, in order for the accused to obtain bail...and that by this " the golden thread that runs through our common law criminal jurisprudence, i.e., a person is innocent until proven guilty, has been completely upended and given the go-by."

The Petition relies on the case of CBI v Amarmani Tripathi [ 20005 8 SCC 21] which laid down eight parameters to be considered while granting bail- prima facie ground to believe, nature of offence, severity of punishment, likelihood of offence being repeated, witnesses being tampered with, among others.

The Petition submits that as far as Section 43D(5) is concerned, the existence of a prima facie case is all that is required in order to keep a person incarcerated, without any consideration for the other 7 elements.

"Therefore, in cases where the principle of "innocent until proven guilty" applies, and if any statute inhibits or prohibits the application of the principle, then the statute is ex-facie unconstitutional and invalid," the Petition submits.

The Petition further makes reliance on Ranjitsing Brahmajeetsing Sharma v State of Maharasthra (2005) 5 SCC 294 and Deepakbhai Jagdish Chandra Patel v State of Gujarat 2019 (16) SCC 547 and Union of India v. K.A. Najeeb (2021) 3 SCC 713 to submit that the Supreme Court, in exercise of its powers under Article 32, has inherent and implicit powers to frame guidelines as to grant of bail in cases under the UAPA to be followed by Courts to ensure that the provisions of the UAPA are not applied arbitrarily, indiscriminately and in a mala-fide fashion, merely to curb dissent.

The Petition prays that the Court:

Petition has been filed by Ann Matthew.