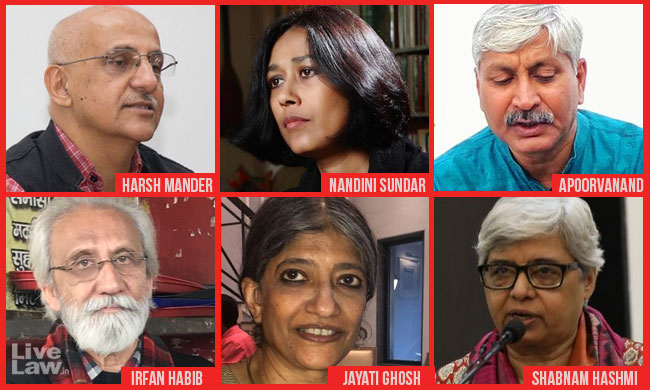 Forty civil rights activists on Monday filed a review petition against the November 9 judgment of the 5 judges bench of the Supreme Court in Ayodhya-Babri Masjid dispute.The petitioners include academics, authors and activists such as Harsh Mander, Nandini Sunder, Apoorvanand Jha, Jayati Ghosh, Irfan Habib, Shabnam Hashmi etc.Though they were not parties to the original case, they said that...

Forty civil rights activists on Monday filed a review petition against the November 9 judgment of the 5 judges bench of the Supreme Court in Ayodhya-Babri Masjid dispute.

Though they were not parties to the original case, they said that they were seeking review as the verdict has a "direct impact on the syncretic culture of the country and its secular fabric envisaged in the Constitution".

According to them, the tenor, language and operative orders of the judgment showed that the Supreme Court had expanded the scope of a title dispute to a "battle about faith" of Hindus and Muslims.

The review petition filed through Advocate Prashant Bhushan contended that the Court placed higher value on the belief of the Hindu parties that the disputed place was the birth place of Lord Ram.

"Therefore, by relying on the faith of the belief of the existence of a temple, over the evidence of existence of the mosque, this decision has been in violation of Constitutional principles of equality and freedom of religion", the petition stated.

By providing exclusive ownership of the disputed land to the Hindu worshippers, and completely excluding Muslim worshippers from access to the land, the faith of one of the communities was consequently regarded higher than the other, thereby violating the secular principle embedded in the Constitution of India, said the plea.

According to the petitioners, the judgment rewarded those who acted illegally by trespassing into the mosque and eventually demolishing it.

"The first criminal act which interrupted the worship in the mosque was the surreptitious and illegal introduction of the Ram idol in the mosque in 1949. The second was the celebratory demolition of the mosque in 1992 by a fevered mob, cheered by leaders like Lal Krishna Advani. The third was the violation of court orders prohibiting any alteration of the status quo of the site, by building a makeshift Ram Temple where the demolished mosque stood, during the 36 hours which followed the demolition of the mosque. The court does acknowledge in its judgment the wanton debasement of the law in the first two cases, yet rewards the party responsible for this, for their multiple assaults on the law, the constitution and the Supreme Court".
The Court overlooked that these crimes took the toll of hundreds of innocent lives in communal violence that rocked the country from 1989 to early 1993, and that their unhealed wounds continue to tear apart the country decades late, stated the review petitioners.

"The Court categorically ruling in favour of the so-called Hindu parties was nothing but providing legal recognition of these illegal acts. Because of this, the Court's decision is dangerously complicit in the violation of constitutional principles".

"the Orders passed by this Hon'ble Court have allowed the concerned militant Hindutva outfits to take advantage of their illegal actions such as placing the idol under the central dome on the intervening night of December 23/24 1949 which were done to further manufacture a cause of action. The Hon'ble Court fails to consider this act in light of the settled principle of law i.e. ex turpis causa non oritur actio (from a dishonorable cause an action does not arise)".

The Muslim side has filed a review petition against the verdict contending, inter-alia, that the relief to Hindu parties amounted to rewarding illegal acts of trespass and demolition committed against the mosque. The judgment is mostly based on Hindu faith than secular principles, contended another set of review petitions filed by persons backed by the All India Muslim Personal Law Board.

The Hindu Mahasabha has also filed a review against the direction to allot 5 acres for construction of mosque as a 'compensatory measure'.