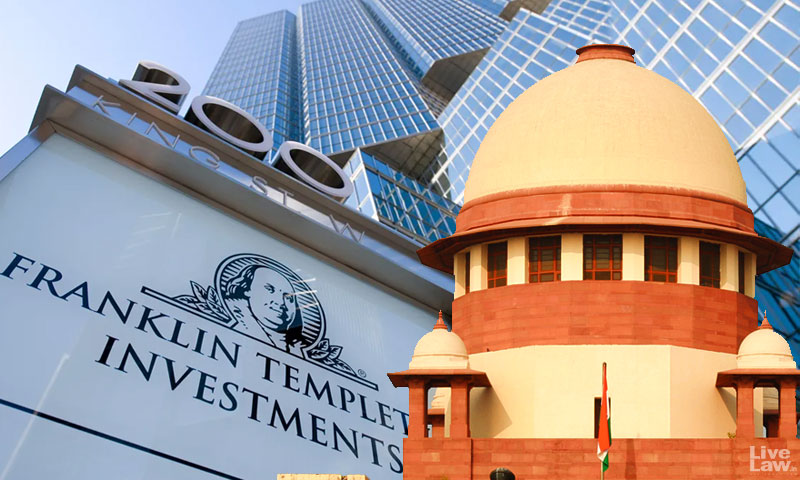 Securities & Exchange Board of India has appointed an Observer regarding e-voting of unit holders of six schemes of Franklin Templeton Mutual Fund.This comes in light of an order passed by top court of December 9, 2020 whereby the top court had also directed that the result of the e-voting would not be announced and would be produced before the Hon'ble Supreme Court in a sealed...

Securities & Exchange Board of India has appointed an Observer regarding e-voting of unit holders of six schemes of Franklin Templeton Mutual Fund.

This comes in light of an order passed by top court of December 9, 2020 whereby the top court had also directed that the result of the e-voting would not be announced and would be produced before the Hon'ble Supreme Court in a sealed cover along with the report of the Observer appointed by the SEBI.

The SEBI had been requested to appoint an observer for the purpose of the e-voting of unit holders, which is scheduled to take place between 26 and 28 December, in relation to the Franklin Templeton debt schemes that were wound up this year.

Accordingly, SEBI has appointed Shri Taruvai Subayya Krishnamurthy, the former Chief Election Commissioner of India as the "Observer" on December 18, 2020.

On December 25, Chennai Financial Markets & Accountability (CFMA), one of the petitioners at the forefront for the cause of Unit Holders in the Franklin Templeton Mutual Fund (FTMF) case of winding up of six of its schemes had moved an urgent interim application before the Supreme Court in light of order of the court dated 9th December being rendered non-est.

It was contended by CFMA that though the aforesaid order was passed on the 9th of this month, there had been no "apparent" steps taken by SEBI to appoint an observer.

"The voting is schedule to commence from tomorrow (26th December) and there is no update about who the Observer is, or his/her email id, contact information, etc.," it said.

The CFMA had stated that the conduct of SEBI in the FTMF case had remained "questionable" since the abrupt winding up of the six schemes in April 2020 by FTMF citing frivolous reason of COVID-19.

"Hon'ble Karnataka High Court also observed that SEBI being the market regulator did not do enough to sustain the confidence of investors and that the investors would be "justified in their criticism that SEBI was a silent spectator". Had it been any prudent regulator, it would have given the details of the observer well in advance for the unit holders to voice their grievances, if any. However, in the present case, SEBI has left the unit holders in lurch. FTMF choosing weekend for voting and SEBI remaining silent on the observer shows that the duo does not want to keep the voting process transparent and unbiased," the petitioner stated.

"What is the use to declare or put it in public domain today when the appointment was made on 18th Sept? The voting has already begun," Manoj K. Sethi, President of CFMA told Live Law.

Sethi also said that SEBI has been useless, vested, biased in the entire Franklin episode. "Everyday the point only becomes stronger," he added.

A bench of Justices Abdul Nazeer and Sanjiv Khanna is currently hearing the plea by Franklin Templeton Trustee Services Pvt Ltd challenging a Karnataka HC order which restrained winding up of six of its debt schemes without obtaining the consent of its investors by a simple majority.

On December 3, the bench had allowed Franklin Templeton Trustees to call for a meeting of unit holders to seek their consent/approval.

The top court had also hauled up SEBI adding that it had a lot to answer for and why did it not intervene when unit holders started seeking redemption, much like how RBI intervened in cases of banks, to protect depositors.