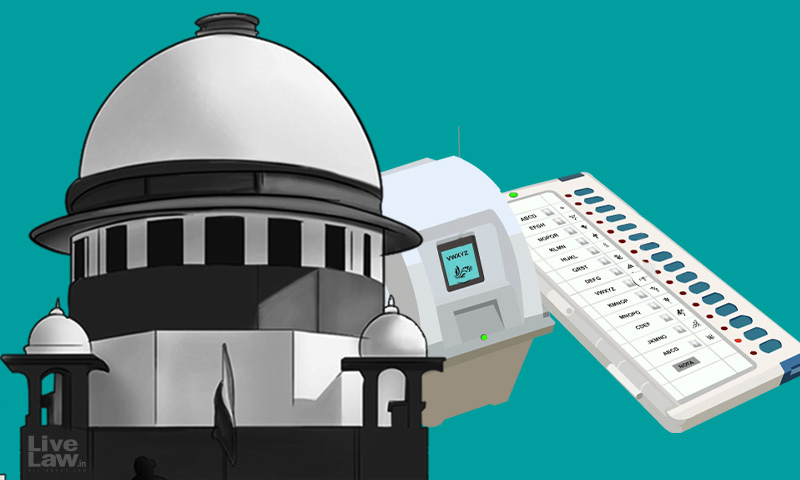 While considering a plea seeking directions to the Election Commission of India to not permit political parties to promise freebies during election campaigns, the Supreme Court on Thursday stressed on creating a balance between the welfare of the State and the economic strain on the public exchequer. ."Economy losing money and the welfare of people, both have to be balanced. That's why...

While considering a plea seeking directions to the Election Commission of India to not permit political parties to promise freebies during election campaigns, the Supreme Court on Thursday stressed on creating a balance between the welfare of the State and the economic strain on the public exchequer. .

"Economy losing money and the welfare of people, both have to be balanced. That's why this debate and there must be someone to put thoughts to the vision," the CJI said.

The bench of CJI NV Ramana and Justice Krishna Murari also refused to look into the aspect of de-registering political parties for distributing freebies.

"I don't want to look into the aspect of de-registration. That's an anti-democratic thing. We are a democracy after all," the CJI said.

The Top Court also said that another question which required to be considered was the extent to which the Court could interfere in the issue.

"Question is, now to what extent we can interfere or go into the issue?  The reason is there is ECI, which is an independent body and the political parties are there. Everyone is there. It's the wisdom of all those people. It's definitely an issue of concern & financial discipline has to be there but in a country like India where poverty is there we can't ignore that issue," CJI said.

On August 3, 2022, the Court had opined that an expert body consisting of various stakeholders such as Niti Aayog, Finance Commission, Law Commission, Reserve Bank of India, and members of ruling and opposition parties would be required to give suggestions to address the issue of promise of freebies during election campaigns. To enable the Court to pass an order for the constitution of such a body, the bench directed the petitioner, Central Government and the Election Commission of India to give suggestions.

What Transpired In Court Today?

At the outset, CJI expressed displeasure on ECI's failure to file its counter affidavit in the court till 10:00 pm yesterday.

Although Senior Advocate Maninder Singh for the ECI submitted that the body had filed it only.  The CJI further said, "If you want to give the same to newspapers, please give it. If it reaches the newspapers, why can't it reach the court?"

Referring to the ratio laid down in S Subramanian Balaji v State of Tamil Nadu wherein the Court had highlighted freebies having the tendency of shaking the nature of free and fair democracy, Senior Advocate Vikas Singh for the petitioner suggested inserting section 29D in the Representation of People's Act, 1951 which could impose an obligation on the political parties to submit a manifesto on financial implications of the promises made during election to the ECI for its approval.

Considering the submissions made by Singh, Solicitor General Tushar Mehta said that most of the freebies were not part of the manifesto but were declared during rallies & speeches.

Reiterating that the distribution of irrational freebies is a serious issue, the CJI said that the Court will not enter into area of law-making as it is the domain of the legislature. He further added that discussion was also required to be done with regards to the effect that this distribution could have.

"Nobody says that this isn't a serious issue but it's a serious issue. Those who are getting they want it and ours is a welfare state. People who are opposing have a right to say that they are paying tax. The amount has to be spent on infrastructure etc and not on distributing money. It's a serious issue. The committee can look into the issue. Making legislation is not very advisable and it'll be exceeding our limit. I'm strictly orthodox. I don't want to encroach on the areas meant by the Legislature. This is a serious issue. It's not an easy thing," the CJI said.

Senior Advocate Arvind Datar, who said that he had appeared in the S Subramanian Balaji matter, opined that while welfare measures might be part of Directive Principles of State Policy "giving gold chains cannot be part of implementing the DPSPs".

Stressing on the fact that a call for financial discipline could not be taken in court, Senior Advocate Vijay Hansaria contended that he'd submitted some recommendations on who could be the members of the Expert Committee.

On the suggestion that parties must declare the financial budget also while promising freebies, the CJI said, "Until and unless they don't come into power, how would they know about the budget? We should not take over the issues, I am very reluctant to look at legislative issues."

Senior Advocate AM Singhvi for Aam Aadmi Party submitted that "freebies" were being used in a very wrong sense here and that welfare measures are different.

Solicitor General Tushar Mehta urged the bench to lay down some guidelines till the legislature addresses the issue.

Terming the issue as "complex", Senior Advocate Kapil Sibal contended that data was required to consider the issue. Citing an example of women being allowed to travel for free in a bus, Senior Advocate said, "There was a lady who works and yesterday she said that I need money to take metro as roads were blocked due to Muharram and when I asked her how does she go everyday, she said that she takes the bus because that's free. Now is that a freebie?"

Recalling an incident wherein his father in law who is an agriculturist had sought CJI's help on the State Government banning electricity for agriculturists or landholders but had later regularised all the irregular connections, the CJI said,

"My father-in-law is an agriculturist and the government had said no free power connection to agriculturists or landholders. He asked me If I could do something and I told him that this is the policy of law and one day, one irregular connection was regularized and his was not. I can't even construct brick in my house because I may violate a sanctioned plan. Next to me, they are constructing floors. What is the message that we're giving?"

Opining that the matter required further consideration, the bench asked the parties to recommend some suggestions and adjourned the same to August 17, 2022.

On January 25, 2022, the bench headed by Chief Justice of India NV Ramana had sought the response of ECI and the Central Government in the petition which had urged the Court to declare that :

Before the Court, the ECI had taken a stand that it is not within its mandate to regulate the policies which a party might adopt after getting elected. In a supplementary affidavit, the ECI declined to be the part of the expert body proposed to be constituted by the Supreme Court to examine the issues relating to the promise of "freebies" by political parties during elections. Saying that it is a Constitutional Body, the ECI has expressed unwillingness to be part of the expert panel.