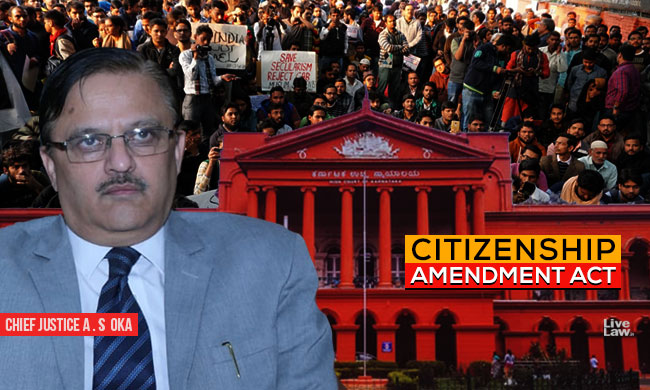 While holding the Section 144 order imposed in Bengaluru on December  2019 in the wake of anti-CAA protests to be illegal, the High Court of Karnataka observed that the fundamental right to hold peaceful protests is a basic feature of democracy.

"The violation of fundamental right to hold peaceful protests, which is a basic feature of democracy, cannot be taken lightly by a writ court", observed the division bench comprising Chief Justice Abhay S Oka and Justice Hemant Chandanagoudar.

The Court said that a test of legality of a prohibitory order under Section 144 of Code of Criminal Procedure is not one of "mere technicality" but was a "matter of substance", as question of infringement of fundamental right to freedom of speech and expression and freedom of peaceful assembly under Articles 19(1)(a) and 19(1)(b) are involved.

Though the judgment was pronounced on February 13, the copy of the same containing detailed reasons was not released until yesterday.

The question before the Court was the legality of the order passed by Commission of Police, Bengaluru on December 18, 2019 prohibiting protests and gatherings. The Court was considering the petitions filed by Congress legislator Sowmya Reddy, Rajya Sabha MP Rajeev Gowda, Leo Saldhana, Kavita Lankesh etc.

The Court observed that the order did not reflect the subjective satisfaction formed by the Commissioner of Police (exercising powers of District Magistrate) regarding the need to impose restrictions to quell immediate threat to law and order.

"A perusal of the impugned order shows that it is only a reproduction of what is stated in the reports submitted by the Deputy Commissioners of Police. There is not even a remote indication that any further inquiry was made by the District Magistrate", the Court observed in this regard.

The stand of the State Government was that no inquiry was necessary in the light of the reports submitted by Deputy Commissioners. The Court did not accept this.

Referring to the recent decision of apex court in Anuradha Bhasin v Union of India case regarding Kashmir lockdown, the HC observed that formation of opinion by District Magistrate on inquiry was necessary. The Court also noted that some of the Deputy Commissioners had already granted permission for protests on the date of prohibition. This was not disclosed in the reports submitted by them to the Commissioner.

"..except for setting out what the Deputy Commissioners of Police have stated in the reports, no facts have been set out in the impugned order. ..

there is a complete absence of reasons in the impugned order", the Court observed.

The Advocate General also tried to sustain the order by stating that there was a direction from the Director General of Police regarding imposition of Section 144 orders. The Court said that there was no reference to any such direction in the impugned order.

Also, the opinion of the superior officer cannot be a ground to impose Section 144 order, the Court added.

"When the Commissioner of Police exercises the power under sub-section (1) of Section 144 of the said code, he does not act as a police officer, but he acts as a District Magistrate and therefore, he cannot simply rely upon the opinion expressed by the police officer who may be incidentally his superior in the police machinery.  In fact, he cannot get influenced by the opinion of his superior officer in police hierarchy while passing an order under Section 144",  the judgment authored by Chief Justice Oka stated.

The Court observed "Unfortunately, in the present case, there is no indication whatsoever of any application of independent mind by the District Magistrate".

The Court declared the order illegal, but did not pass any formal order to set it aside, as the same has "worked out itself".