'Gandhi's Principle For Weakest and Ambedkar's Principle for Constitutional Morality Are my Principles':Justice Muralidhar In His Farewell Speech 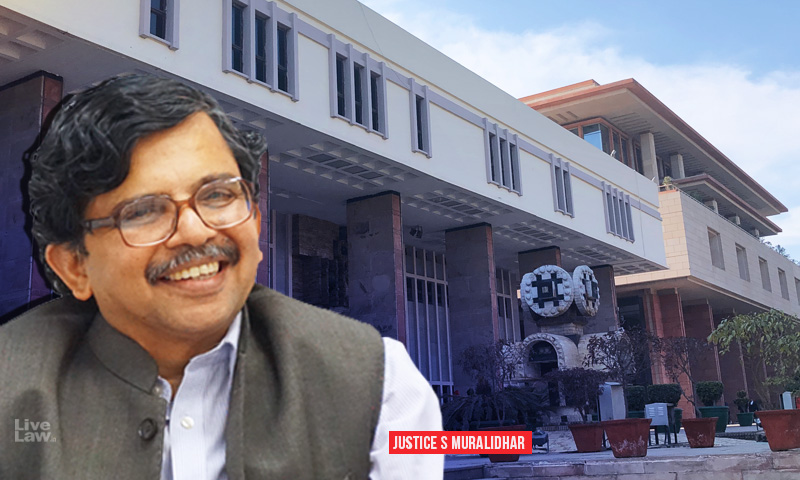 The Delhi High Court on Thursday bid farewell to Justice S. Muralidhar on his transfer to Punjab & Haryana High Court. The High Court was bustling with lawyers as they gathered to witness a Full Court Reference. Chief Justice DN Patel recalled the landmark verdicts delivered by the judge during his stint of 14 long years, including the one on patents and parity on retirement...

The Delhi High Court on Thursday bid farewell to Justice S. Muralidhar on his transfer to Punjab & Haryana High Court.

The High Court was bustling with lawyers as they gathered to witness a Full Court Reference. Chief Justice DN Patel recalled the landmark verdicts delivered by the judge during his stint of 14 long years, including the one on patents and parity on retirement age.

Additional Solicitor General at the Delhi High Court, Maninder Acharya said that Justice Muralidhar always displayed sensitivity towards the plight of people and his judgments depicted this.

"In the last 14 years, I had countless opportunities to argue matters before him. The common Petitioner blesses you."

Advocate Rahul Mehra, Standing Counsel for Delhi Government began his farewell speech by calling Justice Muraldhar a "supremely respected, incredibly courageous, and justice-oriented judge". He said that Justice Muralidhar's transfer was antithetical to Rule of Law and that he was one of the people amongst the legal fraternity who condemned the arbitrariness of it. Mehra added that it was the wish of the Bar that Justice Muralidhar should soon get elevated to the Supreme Court and return to Delhi.

He sang the famous Bengali Song "Tumi Ekla Chaalo..." and translated it to English. "This means, means that even if no one hears your call, you walk alone.Thank you for keeping the flame on side of truth and justice alive. A thousand members of the Bar have been inspired by you", said Mehra.

Mohit Mathur, President of the Delhi High court Bar Association, in a lighter vein remarked that the counsel of Punjab & Haryana High Court must be warned, for Justice Muralidhar is a remarkable man who would never settle for the ordinary.

"Counsel may enter in court, but with socks pulled up" he said.

Justice Muralidhar in his farewell speech thanked his wife and family for their incredible support. Referring to his pet labrador, he poignantly noted that she breathed her last on the day of his transfer. Thanking his staff and each employee of the court, he added that without their support, work would not have been possible.

He had good words for the junior bar.

"What I have to now say is for the junior Bar which I found to be, by and large well-informed, articulate and unafraid. I believe in their hands the future of this Court's bar is secure".

He further added that court spaces must be incredibly democratic, where Gandhi's principle for the weakest and Ambedkar's principle for Constitutional morality must apply.

"Over the years, I have realized that that it is not enough for lawyers and judges to speak about constitutional values. It is important to imbibe them. The constitutional values of equality, non-discrimination, dignity, prohibition of untouchability, inclusivity,  plurality have to be practiced continuously at personal and professional level both. " he said.

Act of judging meditative and mediative

Justice Muralidhar added that the act of judging takes place in a space that is mediative and meditative. The mediative part is the primary function of judging : dispute resolution.

"The meditative space in constitutional adjudication, has for me, at least two guiding principle. The Gandhian talisman of the weakest person and Ambedkar's adoption of Grote's constitutional morality", he said.

He added that he did not subscribe to the view that Judges perform a divine function.

"To me, jettisoning the prefix Lordship and even 'hon'ble' is not a fetish. It is an acknowledgment of how mortal and temporal, and I may venture to add, fallible, we are", he said.

Distinction between impartiality and neutrality

Justice Muralidhar then elaborated on the distinction between impartiality and neutrality.

"Impartiality is non-compromisable for a judge. It is an essential attribute. On neutrality, the Constitution in my view requires the judge at all levels to be able to discern the weak from the strong litigant in terms of their capacities to access justice and lean on the side of the vulnerable in order to attempt to achieve equality of arms"

He then spoke about how exhausting and at the same time enlightening the process of judging can be.

"Judging is, without question, not an easy task. It involves a daily onslaught of negative emotions brought to the court by anxious, and often frustrated litigants seeking justice. It is possible that many of the physical ailments of judges are on account of having to withstand the negative energies. Maintaining equanimity and calm through the day, case after case, is indeed a big challenge.

Judging can be enlightening. It demands that you delve deep into the minds and lives of people across a wide cross-section of society, sometimes very different from your own. It can also be deeply humbling".

Intellectual stimulus for lawyers and judges

"There are some needs common to both lawyers and judges. Intellectual stimulus is one. It is only after becoming a judge you begin to realise that there is even less time, than as a lawyer, for doing serious reading of both legal and non-legal literature. Having a forum to meet, discuss and exchange ideas is helpful to both judges and lawyers".

He then spoke about the Friday Meeting Group he initiated in 1998 in his lawyer days.

"Films reflecting real events, having relevance to issues confronting legal system, can form powerful tools of communication. This is my experience from screening films in my chamber for colleagues as a lawyer, and here in the High Court judges' lounge fr my colleagues and their LRs...

The use of multi-media, audio and visual material, is equally an effective means of teaching as I found them when I taught credit courses in two national law schools in the past few years".

On what keeps him going as a judge

"What keeps me going as a judge? Those moments when I can bring to an end a two or three-decade old case, get an 80-year-old pensioner relief, long overdue retiral benefits to the legal representatives of a deceased bus conductor or wrongly dismissed CRPF jawan, reverse a wrong conviction or a wrong acquittal. The cry for justice is loud in every roster and in every court. What I felt every day as a Judge, and still feel, is that it never seems enough".

Justice Muralidhar also suggested diversifying paperless courts, enhancing transparency for effectuating access to justice and using multimedia as an effective way of teaching. Recalling the day he delivered the Judgment that struck down Section 377 of the IPC with the then Chief Justice A.P. Shah of Delhi High Court in 2009, he said that many people broke down in the court. He continued, "That day we knew, justice happened!"

Further, Justice Muralidhar brought up the controversy surrounding his transfer and expressed that he would like to clear the air before he left.

"In my case, the Collegium's decision was communicated to me by the CJI on 17 February by a letter which sought my response. I acknowledged receipt of that letter. I was then asked to clarify what I meant. As I saw it, if I was going to be transferred from the Delhi High Court any way, I was fine with moving to the Punjab & Haryana High Court...I therefore clarified to the CJI that I did not object to the proposal. An explanation for my transfer reached the press via Maneesh Chibber's article in The Print...quoting sources, confirming what had been indicated to me a couple of days earlier", he said.

Before concluding, he referred to the events of February 26, when he held a midnight hearing for relief of Delhi riot victims, and also passed order in Harsh Mander's plea for registration of FIR against politicians for hate speech.

"26th February 2020 was perhaps the longest working day of my life as a judge of this Court", he said.

"I will always be proud to be called as a former judge  of the best High Court of India, unarguably the Delhi High Court" he concluded.