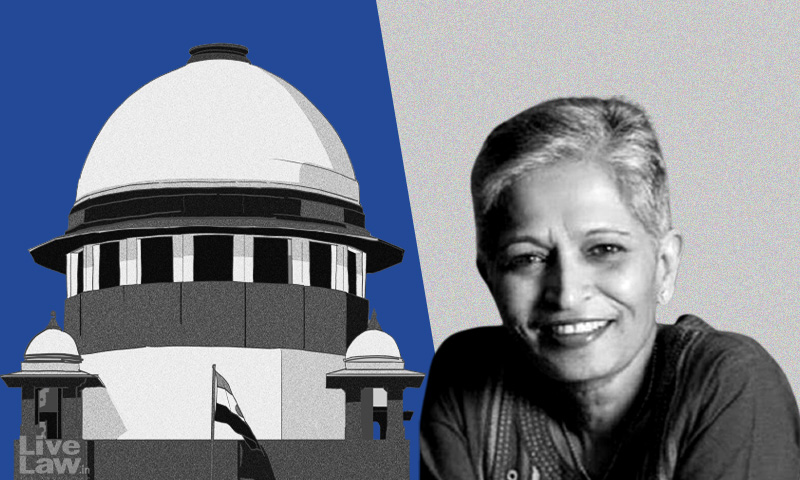 The Supreme Court on Tuesday issued notice on a special leave petition filed by filmmaker Kavita Lankesh challenging a judgment of the Karnataka High Court which quashed the charges under Karnataka Control of Organised Crimes Act (KCOCA) against accused Mohan Nayak in the Gauri Lankesh murder cases.Kavita Lankesh is the sister of Gauri Lankesh, who was shot dead in Bengaluru in 2017....

The Supreme Court on Tuesday issued notice on a special leave petition filed by filmmaker Kavita Lankesh challenging a judgment of the Karnataka High Court which quashed the charges under Karnataka Control of Organised Crimes Act (KCOCA) against accused  Mohan Nayak in the Gauri Lankesh murder cases.

Kavita Lankesh is the sister of Gauri Lankesh, who was shot dead in Bengaluru in 2017.

On this, the bench comprising Justices AM Khanwilkar, Dinesh Maheshwari and Aniruddha Bose observed that the bail application should be decided uninfluenced by the impugned judgment.

The SLP arises out of the murder of journalist Gauri Lankesh outside her home in Bengaluru on 5th September, 2017. The plea submits that complaint was lodged under Section 302 of the Indian Penal Code against unknown persons by the Kavita Lankesh and the investigation was entrusted to the SIT, and this investigation clearly indicated that accused persons were involved in an "organized crime syndicate", thereby attracting provisions of KCOCA.

Further investigation found, the plea contends, that Nayak had been actively found providing shelter to the killers, and that he was involved in "continuous unlawful activity" within the meaning of KCOCA.  Thereafter, sanction was accorded under Section 24(2) of KCOCA and supplementary chargesheet was also filed.

The plea submits that the investigation undertaken had also revealed that the syndicate, which was led by Amol Kale, had committed other crimes as well, including the murder of Dr. Narendra Dabolkar in 2013 in Pune, murder of Govinda Pansare at Kolhapur, Maharashtra in 2015, murder of Dr. MM Kalburgi in 2015, and conspiracy to murder Prof. Mohan Bhagavan of Mysore in 2018.

However, the impugned order of the Karnataka High Court, delivered on 22 April, 2021, quashed both the order of the Bengaluru Commissioner of Police as well as the supplementary chargesheet. Therefore, charges under KCOCA were dropped against Nayak.

The instant plea submits that the Karnataka High Court has erred in its order by "not examining the scheme of Section 24 KCOCA which states that prior approval ought not to be granted by any officer below the rank of Additional Director General of Police which has been duly complied with in the present case".

In light of the above, the appeal prays for a stay on the operation of the final judgement and order dated 22 April, 2021 passed by the Karnataka High Court.