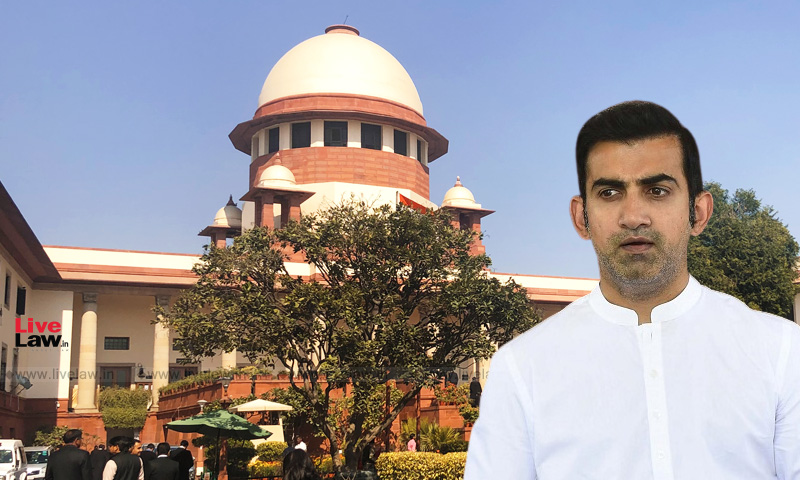 The Supreme Court on Monday refused to entertain a petition filed by Gautam Gambhir Foundation against the order passed by the Delhi High Court for enquiry into alleged hoarding of COVID-19 drugs by the trust headed by former Indian team cricketer and present BJP MP from Delhi Gautam Gambhir.A bench comprising Justices DY Chandrachud and MR Shah made oral observations disapproving...

The Supreme Court on Monday refused to entertain a petition filed by Gautam Gambhir Foundation against the order passed by the Delhi High Court for enquiry into alleged hoarding of COVID-19 drugs by the trust headed by former Indian team cricketer and present BJP MP from Delhi Gautam Gambhir.

A bench comprising Justices DY Chandrachud and MR Shah made oral observations disapproving the distribution of essential COVID drugs by a single individual when people were running 'helter-skelter' to procure the same during the peak of the second wave in April-May this year.

"We read the papers. People were going helter skelter to procure drugs during the second wave. And then suddenly one person started distributing drugs. This is not done", Justice Chandrachud observed.

The submission made by Senior Advocate Kailash Vasudev, appearing for Gautam Gambhir Foundation,  that the petitioner was doing service to people, did not appeal to the bench.

"Individuals cannot distribute drugs. We saw how the common man was suffering. This cannot be done. Do you want us to go into merits?", Justice Shah remarked.

The bench said that the petitioner gets itself impleaded in the proceedings before the Delhi High Court and raise the contentions there.

On May 24, the Delhi High Court had directed the Drugs Controller to conduct inquiry against Gautam Gambhir, AAP MLAs Preeti Tomar and Praveen Kumar on unauthorized distribution of COVID drugs.

"Mr. Gautam Gambhir must have done it to genuinely help the needy people. Let us be clear about it. But the issue is, is that a responsible behaviour? Should he not have realised that Medicines are in shortage for others. When people were not getting medicines, should he not have thought about this? Many people would have suffered because of this. This was no way", Justice Vipin Sanghi of the High Court had orally remarked while ordering the probe.

"He might have not done it with that intention but this is not to be done. The way he has gone about it, he has done a disservice. This wasn't the way certainly. Even with the best of intentions, they are malpractices. In our society, we can't permit this."

A division bench comprising of Justice Vipin Sanghi and Justice Jasmeet Singh was dealing with a plea filed by Dr Deepak Singh seeking registration of FIRs against leaders of political parties indulging in hoarding and illegally distributing covid 19 medicines denying the access to the said medicines to the public at large.
Gautam Gambhir had come under scanner for distribution of Fabiflu medicine strips in his constituency.
Two weeks back, the Drugs Controller informed the High Court that prosecution has been launched against Gautam Gambhir Foundation, its trustees and CEO, along with AAP MLAs Praveen Kumar and Imran Hussain on July 8 for contravening the provisions of Drugs & Cosmetics Act , 1940.