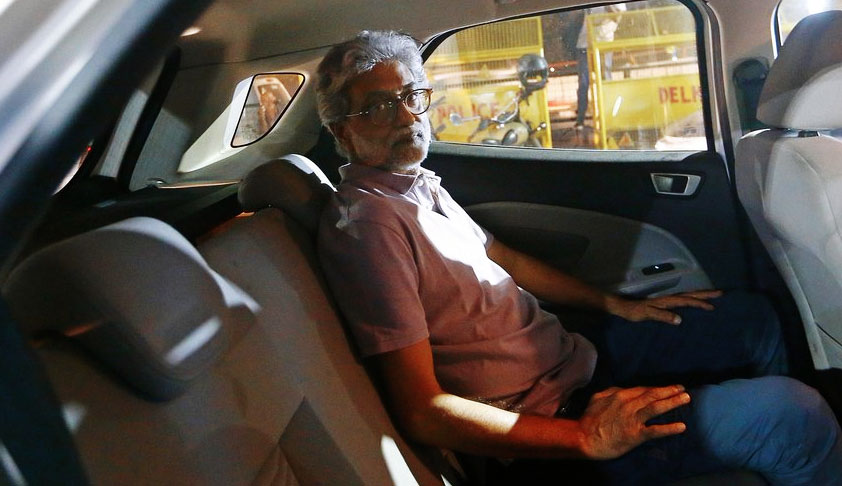 A Two-Judge Bench of Justices UU Lalit and KM Joseph was hearing the plea against the Judgment of Bombay High Court which refused to interfere in his criminal appeal filed against an order of the special court, which rejected his application for default bail in June, last year. He is in prison since his surrender on April 14, 2020.

The matter will be next heard on March 15.

The plea, filed by Advocate Shadan Farasat, submits that the main question that arises is whether the period of 34 days when the Petitioner was in custody by way of house arrest pursuant to the orders of the Delhi High Court and the Supreme Court modifying transit remand order dated 28th August, 2018 of the CMM, Saket Courts, would count as custody for the purpose of default bail under Section 167(2) CrPC.

It is averred that the order of the Bombay High Court suffers from serious infirmities, such as a wholly misconceived and dangerous reading of the Delhi High Court order and thus, invariably accepts the NIA's contention that the arrest, remand and detention of the Petitioner had become "non est".

Further, the plea also submits that the rationale that the Investigating Officer did not get an opportunity to interrogate the accused is not a ground to infer that the 34 days spent by the Petitioner in custody pursuant to judicial orders does not constitute "custody" under Section 167 CrPC. The Bombay High Court, it is submitted, has also wrongly held that only the period of custody after the Petitioner's surrender before NIA and subsequent production before a Magistrate can be counted for the purpose of default bail.

Navlakha had sought default bail on the grounds that the National Investigating Agency (NIA) had failed to file their chargesheet within the stipulated period of 90 days. The NIA, however, contended that Navlakha was under house arrest for 34 days, between August 29 to October 1, 2018, which was declared illegal by the Delhi High Court. Therefore, it could not be included in his custody period.

However, the Bombay High Court, observed that, the time spent in "unlawful custody" cannot be included while computing the 90 days period prescribed for grant of default bail under Section 167(2) of the Criminal Procedure Code (CrPC).

The Court had further observed that the 34 days Navlakha had spent under house arrest between August 28, 2018 - October 10, 2018, could not be used to calculate his total detention period, especially since his arrest, as well as the Magistrate's transit remand, was found to be illegal by the Delhi High Court.

"It is not possible for us to fathom a situation where detention of the Appellant (Navlakha) though held to be illegal & unlawful rendering the authorisation by the Magistrate untenable should still be construed as an authorised detention for the purpose of Sub-Section (2) of Section 167 of the CrPC", the Court had observed.

The Court held that there was no doubt Navlakha was under house arrest, during which time he could interact only with his family and lawyers. However, the Investigating Agency did not have any access to him or an occasion to interrogate him, as the High Court had ordered the police to keep Navlakha at the same place from where he was picked up.

The Court held that Section 167(2) of the CrPC, assumes that the detention is authorised by a Magistrate, and 90 days upward from that day can be used to calculate the period of custody for default bail.

However, once the authorisation by the Magistrate is declared illegal consequently rendering the detention itself illegal, the said period (house arrest custody) cannot be construed to be an authorised custody within the meaning of Section 167(2) of CrPC", the Court said.

The Maharashtra Police had arrested Navlakha on August 28, 2018 in connection with an FIR lodged following the 'Elgar Parishad' held on December 31, 2017 and the Bhima Koregaon violence, a day after. Through the nationwide crackdown on activists and academics, connected to the conference, the police claimed to bust a larger maoist conspiracy.