'No Basic Affirmation Of Facts By UP Police' : Karnataka High Court On Notice To Twitter India MD In Ghaziabad FIR 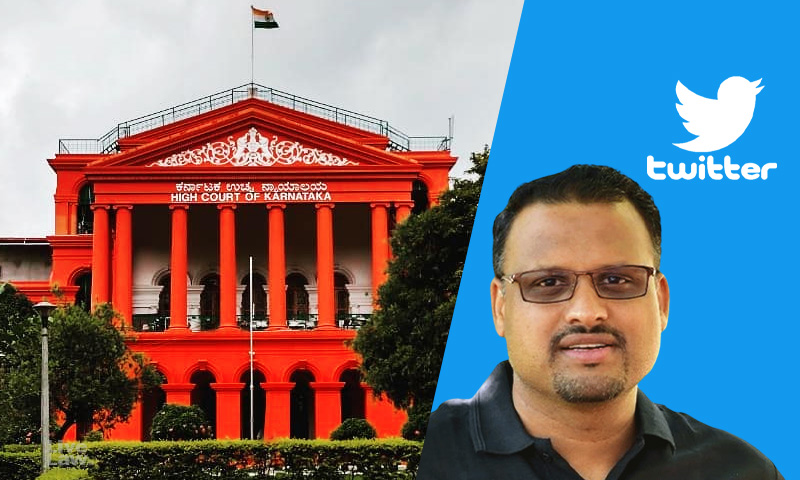 The Karnataka High Court on Tuesday posed several questions to the UP Police for insisting on appearance of Twitter India's Managing Director Manish Maheshwari for investigation in the FIR related to Ghaziabad video, without ascertaining the basic facts about his and Twitter India's culpability in the matter. Justice G Narender noted that crux of the matter is that a doctored video...

The Karnataka High Court on Tuesday posed several questions to the UP Police for insisting on appearance of Twitter India's Managing Director Manish Maheshwari for investigation in the FIR related to Ghaziabad video, without ascertaining the basic facts about his and Twitter India's culpability in the matter.

Justice G Narender noted that crux of the matter is that a doctored video was uploaded on Twitter platform, however, Twitter India may not be connected with the alleged incident. "Whether Twitter India is capable of controlling the content?" the Judge specifically asked.

"What is the allegation against Twitter India? There must be substance to say that Twitter India is capable of removing it? How does the complainant connect Twitter India. Don't bring in IT Rules now. IT Rules will not come here," the Judge lashed out at UP Police's counsel asking him not to mix up Twitter India and Twitter INC.

"Have you even been able to make a prima facie determination that Twitter India is responsible or is even in control to stop this ac?t. Have you done this? Whether Twitter India claims to be an intermediary? Even this basic affirmation of fact is not done."

Senior Advocate CV Nagesh, appearing for the Twitter MD, informed the Bench that the social media giant's Indian counterpart does not come under Section 79 (Intermediaries) of the IT Act.

"Then where are you heading?" the Judge asked the UP Police.

The Bench proceeded to observed that the UP Police has not even shown if Twitter was in a position to prevent the alleged incident.

It orally remarked, "Is there anything to show there is some omission by Twitter. If there is an allegation under Section 376, potency is relevant. You are investigating against the company. To investigate you are required to identify the individual. But if the entity is not able to commit such action then where is the point. This petition is nothing unless you can show he could have prevent it."

During the course of hearing, Senior Advocate CV Nagesh, appearing for the Twitter MD, had argued that Maheshwari is merely an employee of the company and he had no control over the video of the Ghaziabad incident being shared in Twitter by certain journalists and politicians.

UP Police on the other hand claimed the 41A notice was issued to the Petitioner only in a representative capacity and their aim is to merely identify Twitter India head, for which they seek the Petitioner's cooperation.

"You (UP Police) issued notice under sec 160 CrPC he has responded saying he has no control over the content and pleaded inability. Have you even ascertained whether Twitter India is capable of controlling the content", the Court observed.

The Bench was also addressed on the issue of territorial jurisdiction, inasmuch as the alleged incident is said to have taken place in Uttar Pradesh. The Court will continue the hearing tomorrow. It is hearing a writ petition filed by Maheshwari challenging the notice issued to him by the UP Police under Section 41A CrPC asking him to appear for investigation in relation to the FIR over circulation of Ghaziabad assault video.

Manish Maheshwari claims to not be a representative of Twitter

Nagesh argued that Manish Maheshwari was in charge of the revenue division of Twitter Communications India Private Ltd (TCIPL) and was only "Managing Director" by designation. He does not control the content shared by Twitter users. It was contended that he was not a member of the Board of Directors of TCIPL and hence was not the "Managing Director" in the statutory sense.

Responding to this, the UP Police submitted that notice was issued to the Petitioner as he is named head of Twitter India. However, the agency it is not after the Petitioner particularly. "The notice was issued in representative capacity. We are not witch-hunting anybody. We only want the Petitioner to disclose who is the person in-charge of the company in India. Foreign company having millions of followers cannot be without a head," it submitted.

To this, Nagesh responded,

All we want is cooperation from the company: UP Police

The UP Police submitted, "The whole FIR is regarding non-compliance of IT rules by Twitter in India…All we want is cooperation from the company. The company has some responsibility towards the country."

Also Read: 'Respond On Compliance With IT Rules Or You're In Trouble': Delhi High Court Warns Twitter

"I have always said I am willing to cooperate with the investigation," Nagesh responded while claiming that till date Maheshwari has not been investigated by the Respondents through virtual hearing, in terms of Court's order dated June 24.

On June 24 , the Court had passed an interim order restraining Uttar Pradesh police from taking coercive action against Manish Maheshwari pursuant to the notice issued to him under Section 41A of the Code of Criminal Procedure in the Ghaziabad FIR. The same has been challenged by the UP Police before the Supreme Court.

"Your lordship in it interim order put me to terms to appear before IO through virtual mode, the investigation has not been stopped. Then why are they not recording my statement," Nagesh asked.

He added that Maheshwari is willing to appear before the Police personally, provided they give an undertaking that they are not going to lay their hand upon him.

"If the respondent only wants to know from me who is in-charge of the company then where is the question of issuing me a notice under section 41A to me. The hidden agenda lies here.

No complaint as such has been made against nor a crime has been registered by respondent against me. The crime is registered only against an institution/company which is being run by a board. The Directors' names are available," Nagesh said.

The Court noted that Maheshwari has already responded to the notice, saying that he has no control over the content.

"How are you and on what basis are you saying Twitter India is responsible? Have you even ascertained whether Twitter India is capable of controlling the content? What is it that you (UP Police) have investigated. Are you saying that Article of Association of the company are beyond your reach? It is matter of record. If you have not collected that then what have you investigated?" the Court asked UP Police's counsel.

The High Court also heard the UP Police on issue of territorial jurisdiction. It was submitted that the Petitioner's application is silent on whether the cause of action as arisen within the territory of Karnataka, wholly or in part. Further, the FIR was registered in Ghaziabad, UP and notice was issued on an address in New Delhi. Thus, the Petitioner has to satisfy Article 226(2), before proceeding further.

The Petitioner claims that he has filed a petition in Bengaluru since he is resident there. The UP Police however cited several judgments showing that residence of Petitioner does not matter.

"This HC would not become the HC for State of UP for the purpose of CrPC," Twitter's counsel argued.

Nagesh on the other hand submitted that it is not in dispute that Maheshwari is a resident of Bengaluru city and the establishment of TCPIL is also in Bengaluru.

"My establishment which they have described as Accused 9, is in Bengaluru which is under the jurisdiction of High Court of Karnataka. Further I have placed on record my Aadhar card where my address is Bangalore."

The FIR was registered over the tweets made by few journalists and politicians about the incident of an elderly Muslim man getting assaulted near Ghaziabad. It was alleged in the FIR that fake news was shared in Twitter that the attack was communal in nature.

The FIR was in the backdrop of an elderly Muslim man's claim in a video that his beard was cut off, and he was forced to chant "Vande Mataram" and "Jai Shri Ram". However, later on, the Uttar Pradesh Police ruled out any "communal angle" and said that Sufi Abdul Samad, the elderly man, was attacked by six men, as they were unhappy over the tabeez (amulets) he had sold them. It mentions offences punishable under Sections 153 (provoking to cause riots), 153A (promoting enmity between religious groups), 295A (insulting religious beliefs), 505 (statements inducing public mischief) & 120B (punishment of criminal conspiracy) of the Indian Penal Code.

The Twitter employee was asked by the UP Police to appear before Loni Border Police Station in relation to the investigation on the Ghaziabad video issue. The Court, while grating interim relief, had permitted the police to record his statement through virtual mode.

(Compiled and edited by Akshita Saxena)