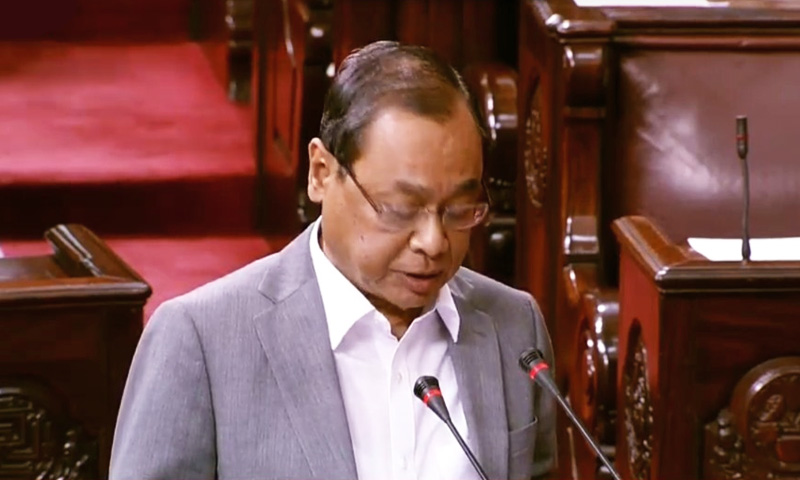 Rajya Sabha MP and former Chief Justice of India Ranjan Gogoi defended the clean chit given to him by the in-house panel of the Supreme Court in the sexual harassment allegations case by stating that the probe was in accordance with established procedure.Speaking to Navika Kumar of Times Now in an interview, Gogoi said that the sexual harassment allegations pained him."I am glad you asked...

Rajya Sabha MP and former Chief Justice of India Ranjan Gogoi defended the clean chit given to him by the in-house panel of the Supreme Court in the sexual harassment allegations case by stating that the probe was in accordance with established procedure.

Speaking to Navika Kumar of Times Now in an interview, Gogoi said that the sexual harassment allegations pained him.

"I am glad you asked this question.  Let us keep it brief, because it pains me. I am a family man, a human being", he said when the topic was brought up.

He justified the convening of the Court on a Saturday to respond to the allegations by saying "extraordinary situations demanded extraordinary actions".

"I convened the Court on a Saturday to deliver the verdict in the Ayodhya case too", he said.

He said that the allegations levelled by a SC employee was an "attempt to destabilize the office of CJI", and therefore he thought it appropriate to convene a sitting on Saturday. Three judges were present in the sitting. "I was not a signatory to the order passed", he said.

Responding to the allegations that the probe was conducted without following due process and principles of natural justice, Gogoi said that the Vishakha guidelines and the 2013 POSH Act do not apply to SC judges.

The probe was held as per the in-house proceedings of the Supreme Court. In-house procedure do not provide for lawyer, witnesses, or cross examination.

"Bringing allegations against sitting a judge is not a very difficult matter...you need a person, a lawyer and a couple of digital platforms..damage is done, whether the judge is exonerated later, the media and the public have enough to gossip about".

Gogoi added that the matter attained finality after the 3-member panel completed the probe and found the allegations to be baseless.

"Yet you will keep on bringing it up,bringing it up..", a visibly agitated Gogoi continued "Every day of my career, this matter was brought up by somebody or other in some forum or other to not to allow the Chief Justice of India hear cases in a right frame of mind".

As regards the criticism that the in-house procedure was not in consonance with principles of natural justices, Gogoi said

"Your or mine comprehension about inadequacies, if any, in the law, will not make the law bad. If there are inadequacies in law, change it. Don't apply the law on an ad-hoc basis. apply the law consistently across the board".

Gogoi also discarded the criticism that his Rajya Sabha nomination was a quid pro quo for judgments favoring the Government.

"Give me a connection between the judgments I made & the Rajya Sabha seat offered to me... President called me for a service to the nation...", he said..

He also said that a "lobby" was at work to malign the judiciary when things did not go the way they intended.

"Nothing ever has influenced me in my tenure & I would like to say that judiciary of India is absolutely pure", he said.

Gogoi also lashed out at the former SC judges Markandeya Katju, Madan Lokur, Kurian Joseph and former Delhi HC CJ A P Shah for their criticism that his acceptance of RS nomination "reduced the majesty of the judiciary".

"Justice Katju is irrelevant. Ignore him.  Justice Kurian Joseph and Justice Madan Lokur, who were my friends, have their own problems. Failed ambitions. As far as Justice A P Shah is concerned, "the champion of judicial independence", it is a matter of record that there are three allegations against him for which his name was not recommended for the Supreme Court"

Gogoi said that his participation on the press conference was motivated by his "sincere belief that things should be set right".

Reacting to the sharp criticism about his acceptance of Rajya Sabha nomination, Gogoi said "Is the Chief Justice of India incapacitated from rendering service to the nation because he has retired?"

On criticism over his RS nomination | Am I incapacitated because I have retired: Ranjan Gogoi, Ex- CJI & Rajya Sabha MP tells Navika Kumar on #FranklySpeakingWithGogoi. pic.twitter.com/iNRpUzapJe

Gogoi also said that Senior Advocate Kapil Sibal had tried to meet him after the press conference to seek the impeachment of the then CJI Dipak Misra.

"But I didn't let him enter my house", he said.